Wait. Wait, wait, wait.
So, H of the Comic Treadmill-- you're telling me there are...
Nazis who can breathe underwater?! 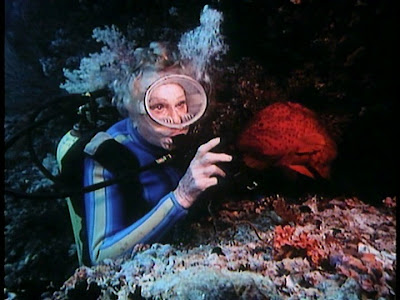 It's a poseidon-send for Aquaman! DC editors/writers, wake up and do something with this.
It writes itself. Decades later, a Nazi underwater colony, tired of living like bums, attack Sub Diego. Or just start raiding ships. Let's see, this would be an excuse for Aquaman to team up with, say, Uncle Sam, who would look hilarious traipsing around on the ocean floor, not needing air, but still wearing redwhitenblue scuba gear and spouting folksy comebacks. Or even Black Manta, who is probably not someone U-Nazis would like very much. Aquaman and Black Manta teaming up to fight underwater Nazis? TELL me you wouldn't read that. 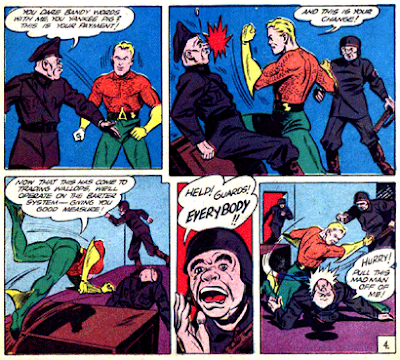 Now, naturally, Aquaman could mop up these aquanazis with no help at all, except for some Finny Friends. Face it, if you're just schlepping around underwater with no real weapons or protection and Aquaman gets mad at you--well, Nereus help you, 'cuz the sharks sure won't.
So, maybe these Nazis have acquired supernatural powers. Maybe they got bitten by one of the underwater vampires Swamp Thing killed in the 1980s, or the events of Blackest Night have turned them into underwater Nazi zombies, or Ocean Master is their new Fuehrer. Whatever! Just start TYPING, DC creative pool.
I swan! There's seventy years worth of crazy crap lurking in and around the DCU's oceans for Aquaman to deal with. When is DC going to get their act together and start using it?
Posted by Scipio at 9:43 PM

I believe it is an axiom, that Nazis make everything better. Make them vampire Nazis, and you're golden. I'm not quite sure that it can come up to the same level as a Nazi Vampire Talking Gorilla...but it's close.

But Black Manta is going to be pretty sour when he discovers that even Nazis won't work with him.

If I was still writing A-man, you can bet your bippy that the AquaManta versus the Uber/UnterseeMensch would already be in progress after seeing this.

Oh yeah! I remember him now! I think I may have written about him once. Good call.

Tad, maybe we should start making an online Aquaman comic as a fanfic project. No problems finding ideas, writers, artists even.

And when DC asks us to cease and desist making an Aquaman comic, we can say, "We'll stop our when you start yours."

"I'm not quite sure that it can come up to the same level as a Nazi Vampire Talking Gorilla...but it's close."