Heroclix is back from the dead!

For those of you who can't access that article, Heroclix, the superhero-comic-themed tabletop strategy game I've written about on occasion, seemed to have died when its company, Wizkids, was closed by its parent company, Topps. But the involvement of another company, NECA, has brought Heroclix back to life, with a Marvel set coming out this fall (Hammer of Thor) and a DC set in the Spring (Brave & The Bold). 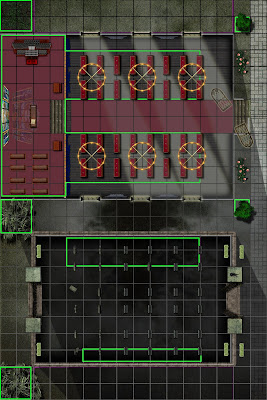 To celebrate, I offer you this map of an abandoned churchyard and graveyard as a venue for a Black Lantern themed game.

Also: the Black Lantern team MUST have Black Hand on it. Any of his teammates whom he can see may automatically heal one click as a free action of the beginning of their turn. And if his team KOs a figure, he can 'bring it back from the dead' as a power action and put it on his team. Resurrected figures reappear wherever they fell, and start on their last click. Because the odds are obviously in the Black Lanterns favor, all the opposing team has to do is KO Black Hand, and flee off the edge of the board. If they can.

It's not likely there will be Black Lantern heroclix made any time soon, so if you want some, you might look for a customer clix maker to create them for you...!
Posted by Scipio at 12:18 AM

Have we actually seen Deadman's reanimated corpse do anything? It doesn't make a lot of sense he'd have Deadman's powers. Yes, I demand sense from this mega event.

Also... you're seriously suggesting we fight against the Spectre PLUS other figures? We're screwed!

Don't forget BL Aquaman and BL Tempest vs. Mera. (Not that I know the first thing about Heroclix!)

...and flee off the edge of the board. If they can. That's basically what Mera did in Blackest Night #2.

Great news, Scipio; thanks for sharing.

Hmm, Brave and the Bold; I'm imagining a whole series of "World's Finest" style combo dials, with all of Batman's guest stars from the team-up series: Batman and Green Arrow, Batman and Sgt. Rock, Batman and the Teen Titans, Batman and Kamandi. . . .

I'm no fan of the dual dials; the underlying mechanic gives me a headache. So I'm not hoping for lots of those. I mean, unless, the characters are conjoined twins, or fight REALLY closely, putting them on one dial isn't very verisimilitudinous, which is what I look for in clix.

Also, experience has shown that the titles by which sets are named are not really strong themes. I hope that means few duals.

What I'd hope for are some solo clix of characters who were first done in the "REV/no special powers" era.

Such as Black Lightning. Or Brainiac, and Brainiac 5.

Or people they never got around to, like Invisible Kid and Vibe. A Golden Age Joker. Negative Man.

You know, I think this is becoming a new post..

Ah, my suggestion about the Batman team-up dials was meant humorously.

I agree with you about Negative Man: he's way overdue, and for that matter, so is General Immortus. (And Immortal Man, and the Time Commander, and Prince Ra-Man, and Multi-Man. . .but then, I never really escaped from the 60s.)

It's just a shame that HeroClix had to "sit it out" for a year; this summer would have been a great time for a Dark Reign-themed Marvel set, and this fall would have been perfect for a Darkest Night-themed DC set.

It would have, but I prefer that regular sets be more "evergreen". I weep uncontrollably when I think of the slots and plastic wasted on
Forerunner, Pariah, the HDC Troopers, the Kingdom Come figures, and the DC One Million figs.

I'd prefer event-themed figures to be in separate, smaller, all-in-one packages, like the Green Lantern Corps was. Can you imagine the Black Lantern Corps set, with Martian Manhunter, Aquaman, Elongated Man, Black Hand, and Earth-2 Superman?

But failing that. . .there's always Dale Roberts. I see he already has a Black Lantern Aquaman conversion posted on his Flickr gallery; hmm, I wonder if you were the customer for that???

I enjoyed picking up most of the Arkham set for deep discount ($3.50per booster), but I'm super happy that it's back and am looking forward to Brave & Bold.

Oh, and to go with Mallah & the Brain and that Gen. Immortus mentioned above: I want a giant Animal-Vegetable-Mineral Man.

Monster Society of Evil. . .heck, that would be a great Collector's Set.

And if you get a giant AVM Man, I want a giant Volcano Man!

Michael, they already made the Ventriloquist & Scarface.

Argh...all this Heroclix stuff looks like so much fun. I always wanted to get into it but none of my friends are into this kind of stuff. *sniff*

My verification word is "reast." That sounds like a villainous verb..."I shall reast you limb from limb!!"

I actually really like my DC One Million Superman click, but mostly because he is one of my non-cosmic level bruisers...

I hope Brave and the Bold has a really good John Stewart click, he needs a new one. Stargirl and a Ted Knight click too. (Not paired though.) And several Legion characters who aren't from that starter set.

Liss, you can play HeroClix solitaire with no problem. Most of my games are solitaire; the only time I get to do face-to-face Clix gaming is when my nephews hit town.

Hmm, Brave and the Bold; I'm imagining a whole series of "World's Finest" style combo dials, with all of Batman's guest stars from the team-up series: Batman and Green Arrow, Batman and Sgt. Rock, Batman and the Teen Titans, Batman and Kamandi. . . .