why Hal Jordan shouldn't have a power ring.

Reason 1. Hal turns his friends and colleagues into birds. 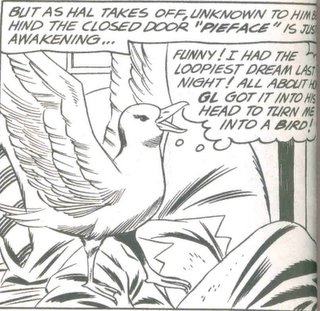 Yes. Hal accidently turned Pieface, his mechanic, into a bird.

If Batman had a power ring, would that happen? No. He would turn his enemies into birds.

Would Wonder Woman? Only if Phil Jimenez needed to show she could still talk to birds.

Superman? Well, yes, it would. But Superman would turn his friends into birds on purpose, and only because it was funny or because it would teach them a valuable lesson. "It'll be a long time before Jimmy wishes he could fly like me again! He should simply be greatful I don't squash him like a bug for being a goober!"

Let's face it, if you had a friend like Hal Jordan and he got a power ring, the only sensible thing to do would be move to Earth 2, or 3 even. Of course, if you were dumb enough to be friends with Hal, then the danger that he poses with a power ring on his finger might escape you.

If you were that dumb, and saw that Hal had accidently turned Pieface into a bird, you'd probably be saying,

Compare with this image from a recent entry at Progressive Ruin.

No, Batman wouldn't turn his friends into birds. However, he would leave detailed plans for doing so on his computer and...