Battle of the Batmen 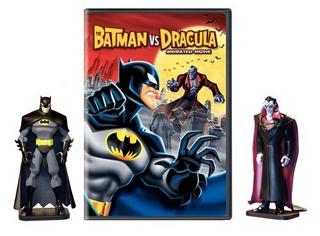 I was pleasantly suprised the other day, when I stumbled across "Batman versus Dracula", the first animated movie based on "The Batman" cartoon.

I haven't been perfectly thrilled with the series. It's not wildly off-base (like Batman Beyond), but I'm uncomfortable with some of its (mis)characters, such as monkey-feet Joker and a Devitoesque Penguin, and the vaguely asian stylings and references. So I wasn't prepared to enjoy Bruce versus Vlad.

But enjoy it I did! Sure, there were some silly scenes (like risible "lipstick on your platter" one) and it's not exactly a mystery who "Prof. Alucard" is. Hey-- it is a kid's show; if I'd been an adult when the 1960s live-action show was on, I probably would have throw myself in front of train from shame. But I was a kid and I loved and millions came to love Batman because of it.


So much to my own suprise, I recommend Batman versus Dracula. Go figure!
Posted by Scipio at 2:16 PM

Still not a fan of "The Batman", and yet I was of "Batman Beyond." Huh, go figure.

Yes, Scip but did you understand it?

Oh, if ONLY there were someone who could explain it to me.

When I'm not being impatient, of course.

I thought "Batman vs. Dracula" was pretty solid, too. And it's nice to know I'm not totally alone in this, as most of TWoP is busy tearing it a new one right now. I still think the regular series is middling at best but it seems to be getting better, and for what it's worth (i.e. nothin') I even like the current cartoon Penguin, character design, voice, and all. And I thought the animated Vicki Vale was cute as a button.

Uhg. The series is a travesty. Just an excuse for selling toys. I've no desire to see a movie based on it.

I'll watch Mask of Phantasm again. There's a Batman movie for you.

Oh, I can understand your feeling, Vincent.

Still, I wish you would watch it. Series can evolve and I'd be curious for a second skeptical opinion (I started out with my own, you see!) as to whether the movie represents an advance for the current series.

I was quite surprised to run into the movie while channel-hopping this past weekend, and even more surprised to find that it was quite good, and not mind-shreddingly inept like the weekly cartoon is.

Although I did see the Poison Ivy/Batgirl episode of the series on the same day, and that wasn't bad either, so it might just be getting better.

I still think it's redundant to be doing a Batman series so soon after Timm's version (why not a Nightwing one? That'd take the anime stylings better, I'd have thought...), but not bad, noy bad at all.

"Quickly, old chum! Get
the Bat-Holy Water! It
is...our only hope!"

I miss the Adam West show. I miss the Bela Lugosi movies...

but most of all, I miss Haikuesday.

I think the biggest advantage of "The Batman" show is that the dialogue and atmosphere seems to be pulled from the Englehart/Rogers/Austin comics.

I thinkt the biggest disadvantage is that the plots seemed to be pulled from old G.I. Joe cartoons from the 1980s.