The Importance of Briefing Arthur

I just got back from San Diego, where, swimming off the coast, I was able to catch up with Aquaman. I wanted to explain to him the plans for his series in 2006 (I'm sure he hadn't gotten the memo, and when you live underwater it's hard to access the internet frequently). Immediately after our conversation, I dashed to make a transcript, which follows.

"Mr. Curry, Mr. Curry! Have you heard that your title teeters on the verge of cancellation due to low circulation?" 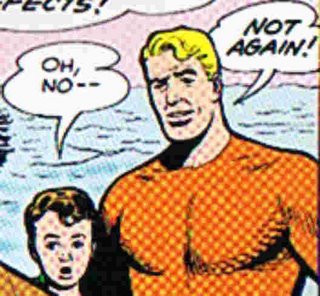 "It's okay, sir. DC has a plan for reviving the title."

"Um, well, actually, sir, you aren't going to be in it. At least for a while. Someone else will be in the role of 'Aquaman: Sword of Atlantis' ." 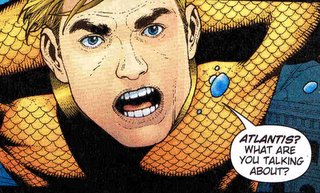 "Someone else as Aquaman, sir; for marketing reasons, he looks a lot like you. Here, look at this picture." 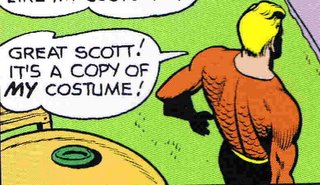 "Indeed, sir. It's going to be an underwater sword & sorcery storyline by the man who writes Conan the Barbarian." 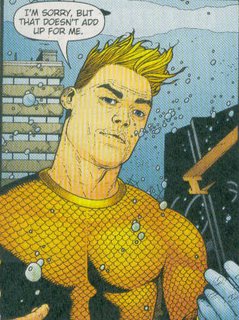 "Er, uhm-- well, sir, it's sort of like what Peter David did. That they later abandoned. And then Rick Veitch kind of did something similar, except you were nice instead of grouchy. Then they abandoned that, too." 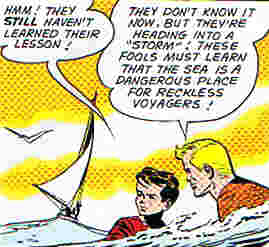 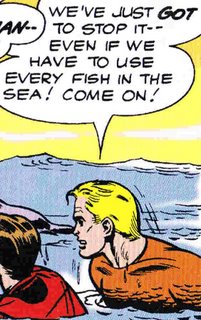 "I'm afraid that's not possible, sir, since you won't be in the seascape for a while." 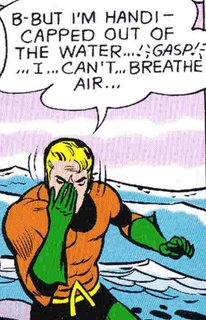 "Um, actually, you can, sir. Will Pfeiffer already fixed that for you. Anyway, ordinarily, characters in your circumstances are sent to the Island of Misfit Characters in Silver Age Limbo, but ..." 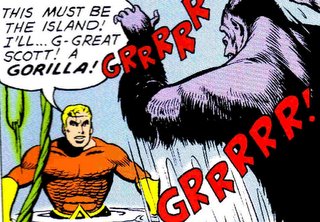 "Please come back, sir! The good news is while you're not Aquaman in the comics you'll be Aquaman on teevee instead." 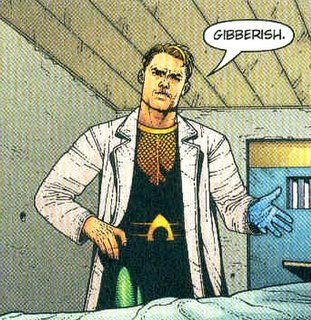 "You'll have to take that up with Marketing, sir. Meanwhile, instead of being in Limbo you and some of your cast will be on the WB, which is nearby. Are you game?" 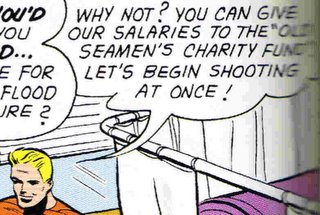 "Thank you, sir; you're a good sport. We'll look for you on TV, and hope to see you back in the comics as Aquaman soon." 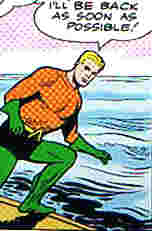 will he and Azrael get their own Vertigo mini-series?

This post is the stuff of comic blogging legend. Wit! Comedy! Satire! Great art! Excellent put downs of stupid new Aquaconan series! This one has it all. Bravo!

Is it just me or does any one else think that Aquaman should where that white coat around everywhere. Also he should say gibberish with it.

Everytime I think of that picture I laugh.

I want a Dr. Aquaman Heroclix.

Although I'm still going to give the new series a snark-free go.

Is it just me or does any one else think that Aquaman should where that white coat around everywhere.

I don't know about that. The watery hand looks like a rubber glove, which makes it look like he's a proctologist about to give me a rectal examination.

Nice. Reminds me of those bits I heard on Dr. Demento where an interviewer's questions would be answered with song snippets. And I'm too late and tired to look up who did those.

Satire at its finest, indeed!
But, what sacrilege is this though; putting down the Aquaconan series of legendary scribe Kurt Busiek?