I got asked for my own 'ballooning' of this panel...

"Sigh! I'm almost close enough to lick his boots!"
"Hera help me, is that my Pleasuretron 3000 on the end of one of GA's arrows?!"
"Sure, Hal, sure; but where's your museum, huh?"
"Nodding off! Must --use chairs -- for support!"
"Moons of Mars, he's actually thinking of building himself his own museum!"
"Okay, one more microblast of x-ray vision should remove that last brain tumor; what in Rao's name does GL keep doing to his head?"
"Jeez, what's with Snapper's grin? He better not have stolen my Pleasuretron 3000 arrow again...!"
"I have-a teeVEE show, I have-a teeVEE show...!"

It is as I (among others!) deduced, demanded, and dreamed:

the Multiverse is back.

Or, perhaps, was never gone to begin with.

As previously mentioned, I think the original undoing of DC's multiverse was a serious error. I hold this opinion not because I'm some Thomasian fanboy who has to believe that everything he's ever read in a comic book "really" happened. I hold this opinion because the multiverse is a firm yet flexible structure for helping readers and writers handle the long-term problems of a 70 year old and growing storyline with some characters that are fixed in time and some that aren't.

Don't get me wrong. I'm delighted that many characters previously kept separate on other earths -- such as the Marvels, the Freedom Fighters, and the Charltons -- are now part of the DCU proper. But the hard truth is, one universe just isn't big enough to contain the DCU. And that's a high quality problem, one I enjoy having.

You can -- and I'm betting some of you will -- comment on how much easier, healthier, and sensible it is to have a monoverse. Don't waste your digital breath. For the sake of argument, I'll even concede all your points are valid. It just doesn't matter.

A monoverse created through the contributions of many people over many years focusing on many different characters will inevitably lead to continuity conflicts. What begins as a fresh start will tighten every year as the storylines expand, and wind up as a confining straightjacket. A multiverse allows you to either parcel storyline out into various parallel worlds or reboot occasionally, starting on a "new earth".

The multiverse is back. The more you struggle against it the more it hurts, so just relax and enjoy it.
Posted by Scipio at 6:25 PM 15 comments:

You may have seen this clip before (or like me, seen it when it aired).


Now them rocketships got them some SWEET turning radii. Gotta get me one of them.

Kairo. Was Pieface replaced because they were trying to be sensitive or was it just so they could use a funky accented character without being criticized? Or, was it merely a way asserting GL's ultraterran aspect?

Sirena. So, do you think it's just her hat, or is her head shaped like that, too? In comics, how exactly do you transliterate her hilariously garbled scream when captured?

Hal's head. Assuming that the mass of the space owl was similar to that of its terran counterparts and judging its speed based on the animation, how much force was applied when the space owl hit Hal's head and knocked him out?
Posted by Scipio at 8:15 AM 19 comments:


Okay, I have to go away for a few days to a Land That Time Forgot, an Internet Free Zone, the Brethren haven of my birth. This means leaving you on your own a bit.

So, here's a little diversion during my absence. You already know how this game is played!

Now it's YOUR turn to determine what each of the Justice Leaguers are thinking in this panel as they teeth-grittingly listen to Green Lantern's self-aggrandizing bloviation.

I look forward to reading your efforts when I return to the 21st century!

Why We Love the Phantom Stranger VI 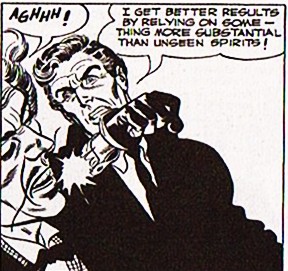 
If the Phantom Stranger doesn't like you, he will beat the living tar out of you.

When miscreants have beards, you have to hit them extra hard. 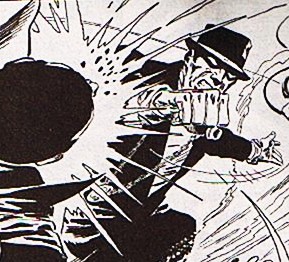 And that is why he wears opera gloves. 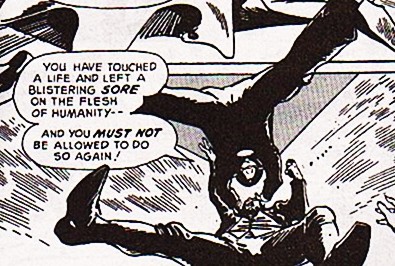 Let's get ready to RUUUUUUUUUMMBBBBLLLLLLE! 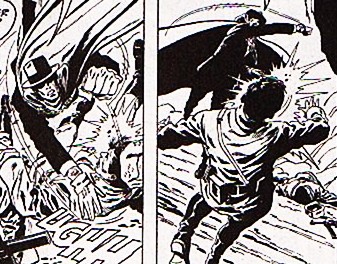 If you have minions, they'd better have insurance,
'cuz when P.S. starts a-wailin' it's like an Act of God. 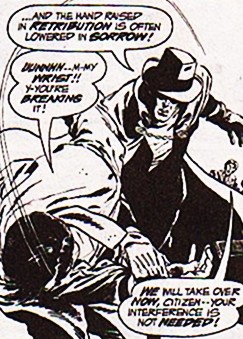 No P.S. beatdown is complete without a severe and haughty tongue-lashing. 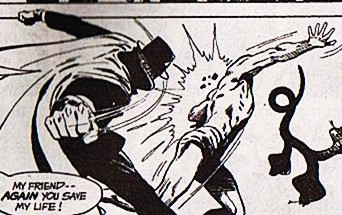 "Unhand that tricapital ophidian, you miscreant!" 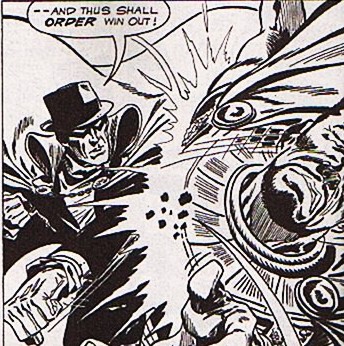 Once he's done pummelling you half way to Jesus and back, then he'll steal your girl. 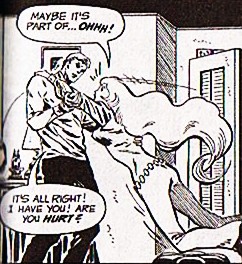 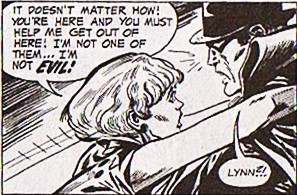 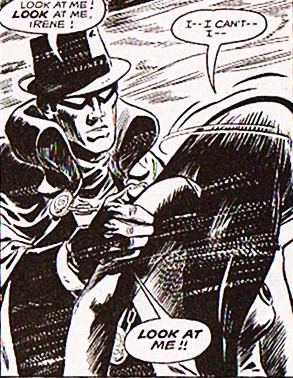 What are you going to do about it? Shoot him? 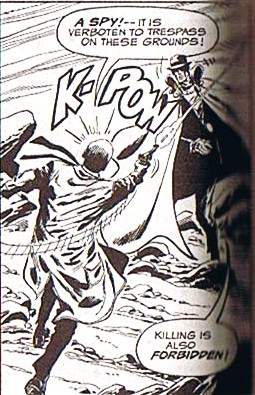 Then, once he's done with both of you, he'll do something so gratuitously, awe-inspiringly fabulous that Bond would simply wet his pants even to view it. 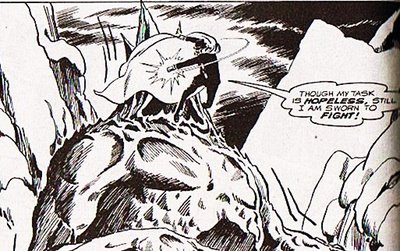 Now that is a man. In an opera cape. 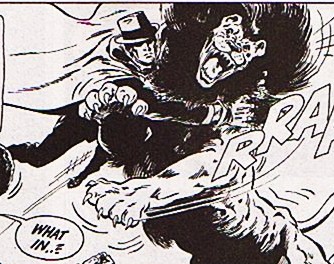 I'm sorry, but anyone who can see that without wanting to have the Phantom Stranger's baby simply isn't human. 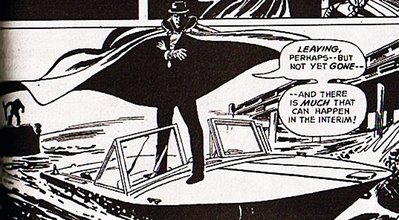 And all of this is done, of course, in The Outfit, which no one else (certainly not James Bond) could carry off. 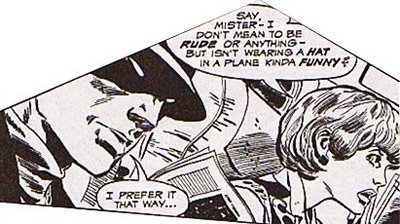