Postcard for the Future; Last night out!

So, last night (my final night in the future), Brainy and Superboy took me out on the town with some of the new Legionnaires...

Brainy totally went for Magnetic Kid; Brainy's a sucker for blonds, you know. 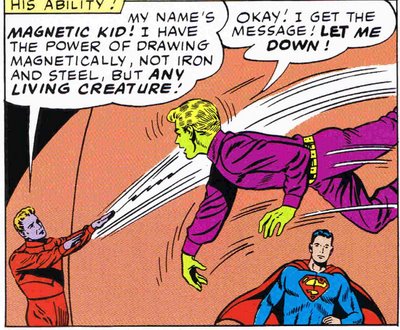 Methinks the genius doth protest too much!

Ever galant, Superboy paired off with Blackout Boy, who, just as one might expect, had too much to drink too fast and... 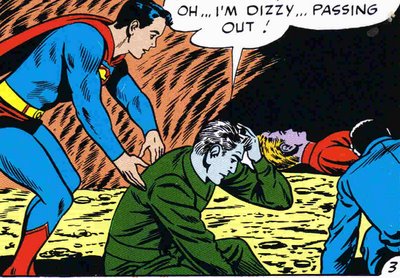 Naturally, he lost control of his power, and everyone else started blacking out, too.

Being kind of stuck on himself, Superboy just assumed he'd be immune to Blackout Boy's power. 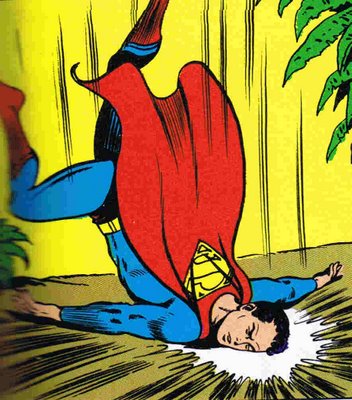 
So I wound up with Size Lad; worked for me! 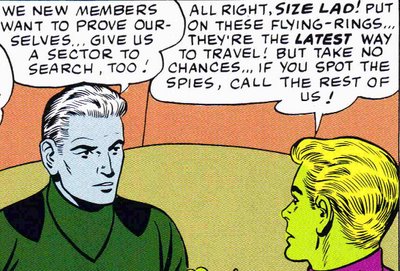 Let's just say I managed to find Size Lad a sector to search, and in the process proved himself thoroughly and repeatedly. Thus, my trip to the future ended happily!

Fun Things to Do With "Action Philosophers"

If you're any kind of decent human being, you bought a copy of Action Philosophers Giant-Sized Thing Volume 1.

Don't just read it! Help put the Action in Action Philosophers with this Activities Guide below. 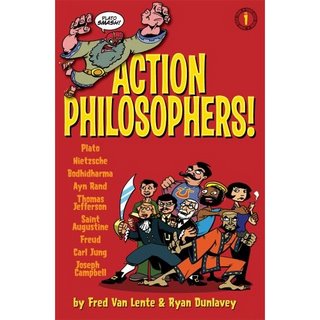 1. After making a devasting refutation of your opponent's arguments during a public dispute, leap upon him violently, shouting "PLATO SMASH!"

3. Make copies of Jefferson's "la-la-la I can't hear you" page and post them at Monticello.

4. Rearrange your comic book collection in the sequence of Campbells' "Hero's Journey" boardgame.

5. Copy the page where Freud pisses himself while arguing with Jung and tape it surreptitiously on a psychiatrist's back.

6. Console anyone so foolish as to have read Rand while young enough to have taken her seriously with the fact that, although she did have Philosophy's Worst Public Meltdown and destroyed her life's work in the process just because she got dumped, she's left a lasting legacy in the lyrics to Human League's "Don't You Want Me, Baby?"

7. Next time you see Bryan Singer remind him that the overt Christian imagery his (and the original) film superimposes on the Superman myth is antithetical with the Nietzschean ideal as expressed by the character's Jewish creators. So there.

8. Tell Catholics that St. Augustine was black. Tell blacks he was Catholic.

9. Remind Kirby Kultists that Jack's only significant literary contribution to comics was written by a crazed Iraqi mystic in the third century. Then move on to a Star Wars fan.

11. Show a Brit the picture of the Queen of England as Jabba the Hutt.

12. Teach a Protestant that the crux of their religion was stolen from the Cult of Mithras.

13. Establish a "Small Philosophers Expo" in your town.

14. Find a Black man named "Jefferson" and give him your copy.

16. Hit a fat guy with your car and tell the police you thought it was Buddha.

17. Pay vandals to spraypaint "Auggie Sucks!" on your local cathedral.

18. Dress like the Village People and explain that you've got a new career as a Philospher-King.

19. Stage an "All People Are Equal" puppet show for the neighborhood children.

20. Demonstrate to any zealot that all philosophies undo themselves through overadherence to absolutes.


Philosophy; it's fun for the whole family!
Posted by Scipio at 6:28 AM 23 comments: 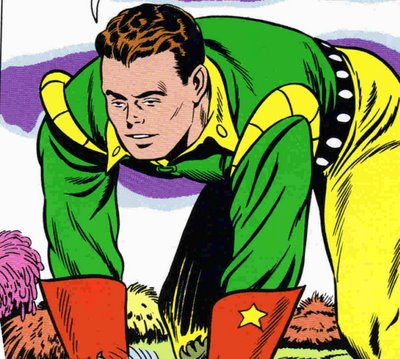 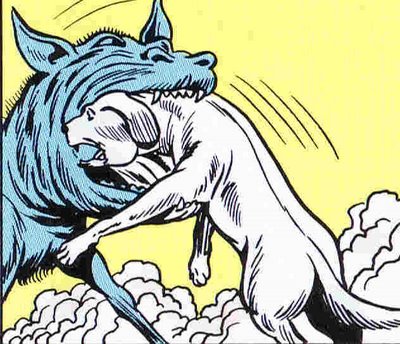 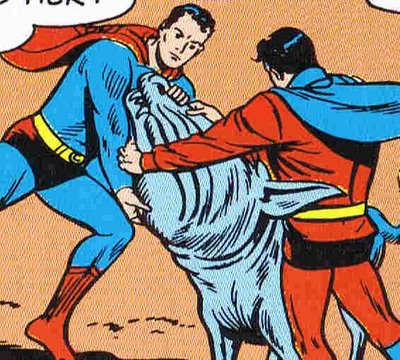 Today was Wednesday here in the future, so I went to the Comic Book Shoppe of Nine Worlds, where the manager, Rob-Bot-3000, says Daredevil: The Target #3 just came out and there's a copy in your sub.

Me, I was happy to find among the new releases the final issue of Justice; very cool. I also picked up Manhunter #12,023, in which (SPOILER) we find out Kate is the granddaughter of Captain Triumph. Oh, and I got the latest issues of Batwoman, Batwoman Family, Detectress, Birds of Gay, and Queen the Batbitch (that's for the dog!).

Ha! Everyone 1000 years ago was so focused on the whole "gay marriage" thing! If only they'd realized that it was Batwoman, "the sensational character find of 2006", that caused the Universal Switch to Lesbianism in the 2200s. And boy--oops I mean "girl" ha ha-- do these future gals know how to party! 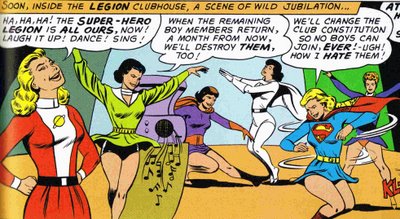 After Brainy explained the whole thing to me, he and Superboy took me to the Museum of Heterosexual History, where displays show the futurites how men and women used to, well, you know.... 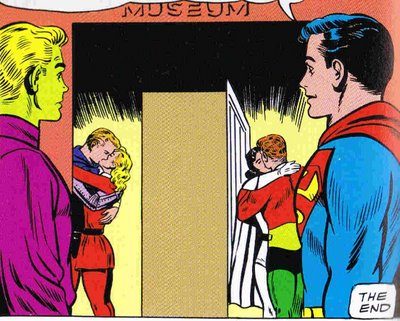 Oh yeah -- I don't know who this "Superboy" is but he sure ain't anything like the Superman in my time; This Superboy fits in really well here as you can see! 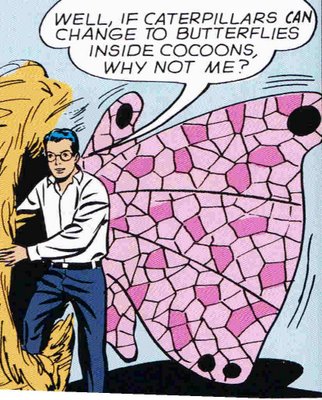 I'll send your books to you via United Tachyon Service parcel.

Met up with your friends in the Legion; thanks for the intro! They're very easy-going; I don't know why people find it hard to understand them. 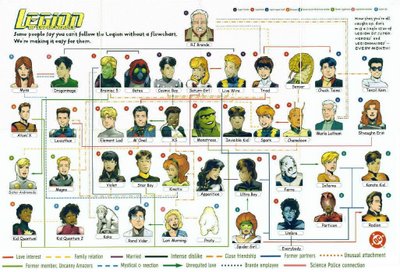 They invited me to stay at their place, but I said no because they really didn't seem to have any extra room there. Why, they've barely got room for their expository narration balloons! 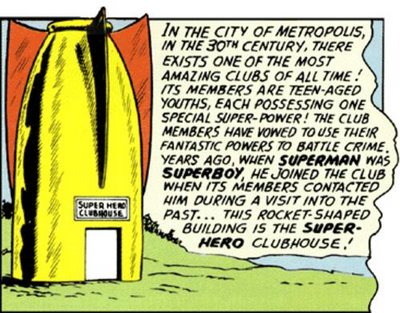 Using an invention, your friend Brainaic 5 is helping me get hep on all the futuristic teen lingo. 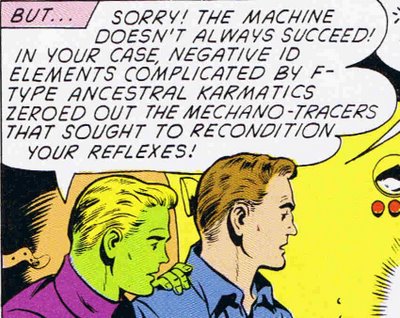 As you can see, I'm not doing very well, ha ha!

Grife, did I laugh when I learned that the future's so squeaky clean that, instead of saying "@#~#$* you!", the kids say: 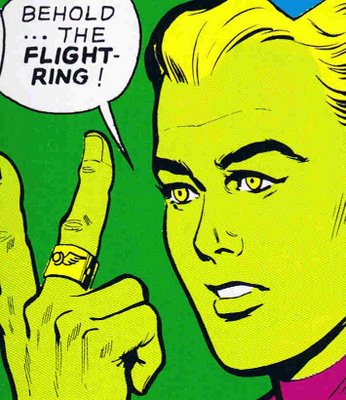 How quaint! I've been waiting to get caught in traffic so I could use it appropriately against a "nass-head", but there don't see to be any cars in the future. Everyone just seems to already be wherever the story requires them to be. Sprokkin' awesome!
Posted by Scipio at 11:49 AM 8 comments:

Thanks for loaning me the Time Bubble; you were right, I'm already loving my vacation in the future!

Staying at an impressive hotel overlooking the city. Neighborhood could be better but the pool is out of this world! And the postcards are free...

Welcome to ... your future!
You'll laugh ... I was waiting for night time to go out and party, but I forgot there is no night-time! It's always daytime in the future; probably some sort of celestio-arclighting to keep commerce going round the clock. Sucks to be Night Girl, huh, ha ha! 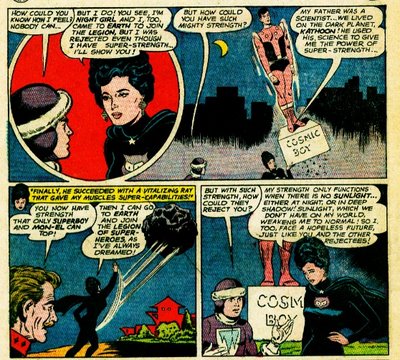 Night Girl's so cheery; I bet she knows Supergirl

Tomorrow I'll hook up with your friends in the Legion; thanks again!


P.S. Bringing the dog has worked out fine; he loves the future food! 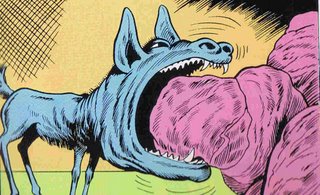