Over the corpse of finally-dead Phillips, the Shield explains the dying reference to a Suicide Club.

Naturally, the Shield, being an FBI agent, calls the local police to come pick up the body.

Oh. Um. Okay. Maybe they don't call the local police to pick up the body.  They just drive away with a corpse casually tucked in in between them.  After all, it is an isolated outdoor locale, where decomposition could set in pretty quickly. Maybe they drive it to the closest constabulary. Maybe they--

Joe props the corpse up for an impromptu reverse mortuary cosmetology lesson. 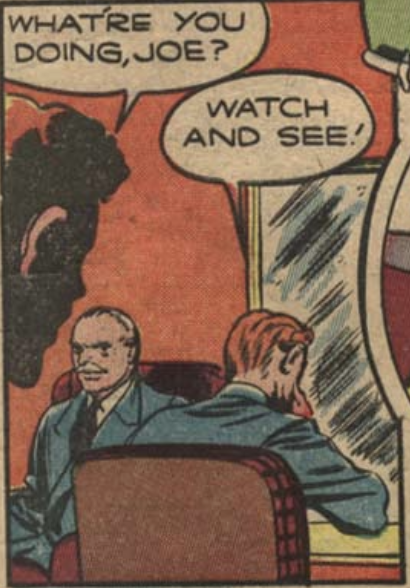 Apparently while obtaining a Ph.D. in chemistry (forgot that, didn't you?), a FBI agent's license to kill, and superpowers, Joe ALSO became a master of disguise in his spare time (which Dusty, the boy detective, is somehow utterly unaware of). 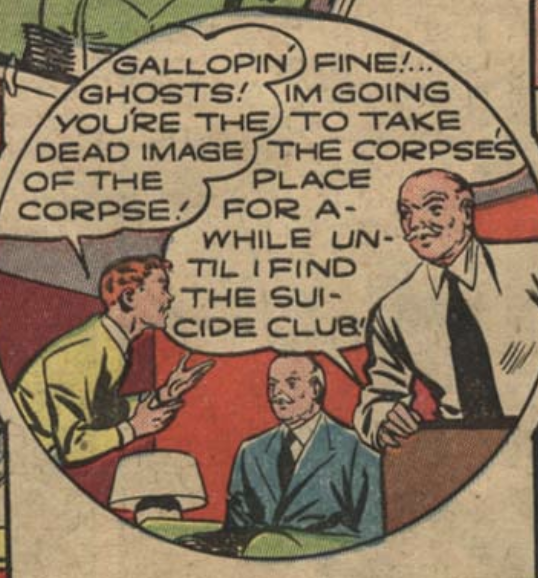 "Gallopin' ghosts"? "Dead image"? You know, maybe sending Dusty to the Hangman for Christmas is the right thing to do, because the boy makes Alice Cooper look squeamish.  If Dusty does have a last name, I'll bet it's "Addams".

Against all odds, Joe has absolutely ZERO problem passing himself off as this dead guy, even among his work colleagues.  My personal theory is that his "innervation" is a general energy field he can direct in any way he sees fit; say, to suddenly become a master of disguise or to cloud the perceptions of people who should clearly know that he's not Jim Phillips.  That would make him a sort of Golden Age Martian Manhunter.

That's absurd, of course, but no more absurd that his getting away with it WITHOUT that being the case. Sure enough, his goal to pose as Phillips to find the Suicide Club produces swift results.

Unlike Oliver Queen, Joe Higgins' infiltration plans work and he's immediately swept into the arms of the Suicide Club, with the Boy Detective trailing him.

Joe-as-Phillips then does something that apparently has never occurred to any other member, despite it being universal and inviolable rule of any card play: he invokes the age-old right to Cut The Deck.  Using his magical power of innervation, I guess, he rearranges the cards so that the President gets the card requiring him to serve as his murderer.

As Shield stories go, it's a clever, passive use of the Shield's most basic power: he's invulnerable, so he's DELIGHTED to put President Grigas in the awkward position of trying to kill him. We'll see how that goes...

Their Suicide Club seems to lack an underhanded plot. I mean, I don't want to be dismissive of suicide (not even among ultra-wealthy idiots) and would prefer people not die, but...possible Wizardo sighting aside (definitely orange, possibly glen plaid...), I'm not seeing why John Wayne would have signed up with this outfit, since its goal seems to just be to postpone the suicide and then enforce it. Maybe that's why Dusty is trying to sneak out in the panel where Joe carries Phillips over the threshold.

I think about comics too much (yes there is such a thing), and this reminds me of some X-Man (couldn't tell you which) whose power is to be unkillable. As in, whenever a deadly threat is about to kill him, his body turns into some random thing that allows him to survive. My thought on how that works is, it's random shape-changing plus some sort of short-term timeline selector, that steers things into a timeline where the character survived by turning into the right thing.

Maybe Joe's power is something like that too; he's basically lucking into whatever he wants, except instead of it being random chance, he's picking timelines where the thing he wants to happen, actually happens.

I promised I think about this sort of thing too much!

I am probably the wrong person to judge how much one should think about the Shield.

Anonymous, I believe you're referring to Darwin, a mutant whose power is to adapt to whatever situation confronts him. Yeah, he's a lot like Martian Manhunter, who manifests whatever power he needs in any situation (at least in the Silver Age).

So the Suicide Club shifts from two people who are required to commit suicide, to one person who is required to kill any person who can't or won't commit suicide. So rather than ask a member to oversee the death of another member as part of the suicide cycle, they only ask a member to oversee another suicide if the person backs out. The bylaws of the Suicide Club must be about the same size as a full set of the Encyclopedia Britannica. I wonder how many members commit suicide because the rules are too damn confusing?

"Say, George, are you committing suicide today or are you on deck to make sure Fred goes through with it?"

"Well, dash it all, I don't remember. I think I'll just end things to make sure I'm holding up my end. Farewell!"