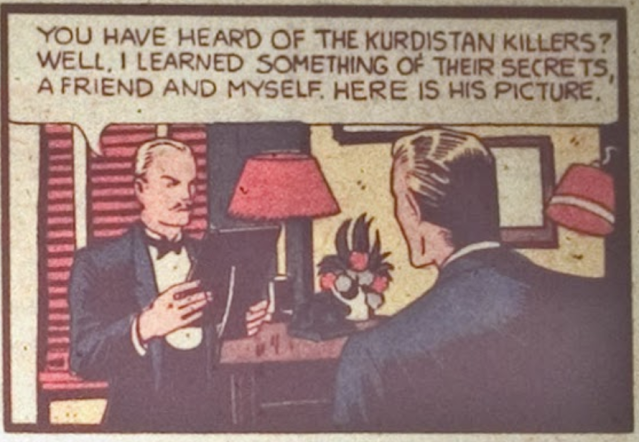 When last we met, Eastern Lore Expert Mr. Trelawney was about to share his knowledge of the Killers of Kurdistan with Speed Saunders, Ace Investigator. which he gained on a trip with his Bachelor Traveling Companion:

Don't get me wrong, I am not laughing because he's dead; I'm laughing because, being 1939, this is as clearly as the writer can permissibly signal that this is Trelawney's young lover.

"See the sights" INDEED.  Anyway, as is SO often the case, the "sights" turn out to be bit more than our Bachelor Traveling Companions bargained for. In fact, it turns out to be:

Yes, against all reason, but because the backstory demands, Trelawney and boy-toy Tom blunder into the local killers' union, into which ...

they accidentally find themselves inducted.

Yeah, I don't quite get it, either.  And I've seen Eli Roth's Hostel (I & II).  Had I been they, I immediately would have stabbed the idiot who led me there.  Anyway, the result is that they are now marked for death by the Killers of Kurdistan, who must have gone to a GREAT deal of trouble to track them down to be killed, rather than just, you know, rescind their memberships at a committee of the whole.  This is what happens in societies that lack Robert's Rules of Order.

Naturally, after this conversation Speed and Trelawney return immediately to the party.  Speed may be a star, but he still only gets about six pages, so events must proceed, including the inevitable Good Guy dances with Bad Gal scene.

Rhett Croissante tries to draw Speed away from the action.

But the action intrudes.

I'm uncertain whether Speed tesseracted them outside for some fresh air and they are on the other side of the window glass or it's just raining in the house. Regardless, the finger of fate pulls the trigger of doom on the back of Trelawney.

Immediately, Speed's alpha-authority powers kick into high gear and he shatters the fourth wall with their force.

Man, if I had a nickel for every time that a shady character accidentally walked me into a murder-club induction and I accidentally swore on their secret oath instead of quietly walking away...

I'm baffled by the secret shootin' panel, though. I mean, there's a heavy curtain two feet over. Surely, the story would defy belief less if the murderer was at a window instead of...a breakfront? A laundry chute? A structural part of the house that the Kurdistan Killers hollowed out because none of them ever took an architecture class?

So the Kurdistan Killers infiltrated Trelawney's house, built a secret passage complete with handy gunport/trapdoor, all for the purpose of murdering Trelawney, whom they basically enticed into "joining" their cult.

That is some serious dedication to recruiting and then eliminating someone. I assume the Kurdistan Killers have some sort of requirement to maximize drama in the commission of their crimes? I mean, if there's no flair, it's just the killers, not the Kurdistan Killers, right?

Cute-Tongued Corpse is the name of our net quartet.

Roberts Rules of Order and Murder?

You have out done yourself sir!