The Persian Jewel Mystery, Part 1: "I didn't order this!" 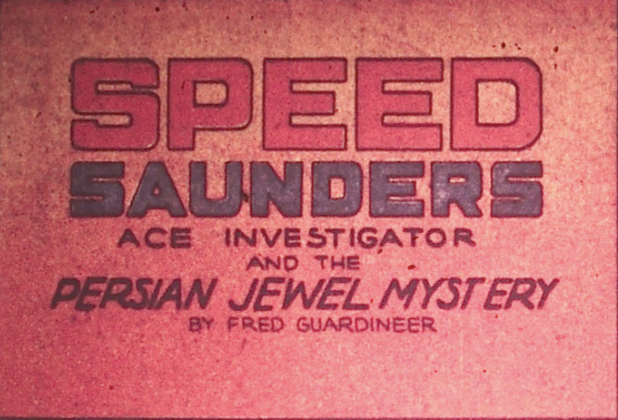 I have to appreciate that when Speed Saunders bothers to stop to give a name to stories--which doesn't always happen--they aren't really titles so much as they are subtitles.  It's not "Red Crescents of Doom: The Killers of Kurdistan", just "The Killers of Kurdistan".  Not "The Consul's Chambers: The Persian Jewel Mystery", just "The Persian Jewel Mystery".  There's a reason the man is called "Speed", people, he's got six pages, and has no intention of wasting them on literary gift wrapping.  His other cases include, by the way, "The Crossbow Mystery", "The Mammoth Mystery", "The Northwoods Mystery", "The Spy Mystery", and "The Railroad Mystery", which contain, respectively, a crossbow, a mammoth, a north woods, a spy, and a railroad. He's an investigator, not a man of mystery.

Before we go on, indulge me on a quick thought experiment. You are high-class jewel thief in 1938 and you suddenly find yourself with some stolen goods on your hands that are too hot to handle. Do you:
a.  Put them in a safe deposit box or similar personal safe place until later?
b.  Put them in a more private location that can't be traced to you?
c.  Ditch them entirely in an unrelated, random place like a sewer or a bush? or
d.  Find a nightclub, search for the one ace investigator known to every authority figure in the city and give his date the jewels right in front of him?
If you picked (d), congratulations and welcome home to the Golden Age.
Understandably, Speed is incensed and demands to see the manager, like the Karen he is.
The manager turns out to be, with unimaginable convenience, a Persian who can, like any Persian, identify the stolen jewelry as rare gems from the Sassanid Empire.
We learn so many things from this triptych.  That the manager is aware of the nobility of the Persian profile. That everyone knows Speed Saunders and that the authorities know where he is at all times.  That if you don't have red crescents over your breasts, you can't hold Speed's attention for long.
Speed tesseracts immediately into the office of the Police Authority Figure, who had wisely strapped himself in to brace for the impact of Speed's arrival.
"I'm giving the case to you, along with my daughter's virginity... and my own, if you'll have it!"  Calm down, Commissioner Safetybelt, what's the Persian consul got on you? Afraid you'll never be able to get seated by another Persian restaurant manager if you don't clear him?
Then we are treated to that rarest of scenes:
The demanding begins immediately because Speed is KEENLY aware that he wasted an ENTIRE PANEL on that artsy silhouetted staircase establishing shot.
That remarkably square-headed fellow Speed's interviewing is named "Bennet".  I feel it's important to tell you this because, even though he's a major suspect and his identity is essential to the plot, THE COMIC BOOK DOESN'T.  Speed has no time for "Tell me how it happened, MR. BENNET"; if you want that kind painstaking handholding, then you can follow the adventures of his cousin, Slow Saunders, Ace Art Restorationist.
Just to help you keep up to Speed, that's a (so-far) unnamed woman with a giant ganache bonbon on her head, Bennet (who is her... date?), the unseen but referenced Nolan (who is now a corpse in the next room), Speed Saunders' back (because, if you haven't noticed it by now, artist Fred Guardineer is REALLY into drawing people from the back) and the guy in the glasses is Persian Consul Syade.

Next: The Pump, The Gallery, and The Dean.

Thank goodness we finally got to a bloodied corpse. That’s when Speed feels like home once more.

Also, I would absolutely read Slow Saunders: Ace Art Restorationist , but only if it’s written by Tom King....

The Persian consul will never be able to get those bloodstains out of the crescent couch. I'm also impressed that Speed doesn't take time to change out of his formal evening wear for something as mundane as a murder investigation.

I love that the Consul is basically a pair of Groucho glasses at various 3/4 angles; that might explain why Detective Harness needs him to be innocent. But is Bennet...is he supposed to be someone specific? Everybody else looks like a quick sketch or a standard Guardineer character, but Bennet reminds me of the Jack Kirby run on Jimmy Olsen, where the editors had someone else come in to redraw Superman's face, except for the part where Bennet is no Superman. Unless that's just what he wants us to think. TELL ME HOW IT HAPPENED! No? Worth a try...

I'm also just going to assume--for simplicity--that "Carol" is actually a de-crescented Prophetress. They have the same dance moves and the same fashion sense. That's why "a stranger" decides that the proper way to "unload" some "hot" ancient artifacts is to just dump it on top of her...well, probably not mozzarella sticks. Mirza Qassemi, maybe, with emeralds.

"I'll see the manager!" Man, Speed Saunders was a Karen before Karens were cool. Hell, he's so Karen-y that even kerning is bending to him: "I'll seethe manager!"

The Golden Age, a time when a stranger would walk up to you in a nightclub and hand over a handful of stolen jewels without a word. What a time to be alive!