The Suicide Club, Part 1: Not a Care in the World!

Strap yourself in, Junior G-Men, masculine and feminine, for 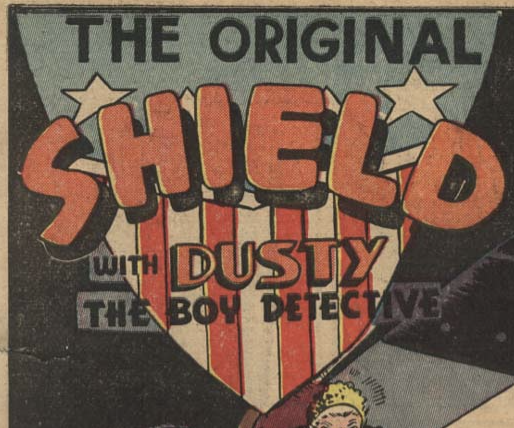 In this story we learn that the Shield and Dusty live in a world where roulette wheels have more the one ball.

Our story begins with generically-named millionaire John Wayne casually losing a bunch of Oreos at the casino.

But, as being classically Thrilling, So Debonair, and Reckless, John laughs it off.

But, in truth, John's creamy smooth exterior hides a rough and crumbling inner self, like an inside-out Oreo.

But this is the Golden Age, where no good suicide should go to waste.

I must admit this part confuses me. I guess John Wayne actually brought a gun WITH him to the casino, which includes a Suicide Lounge among its amenities. Rich people, ammirite? We have to give the writer a break, it's hard to set up a situation where a stranger gets to interrupt a suicide.

Anyway, it's not the Phantom Stranger who stays his hand but some skeevy dude who says suicide is his business, like he's some sort of self-sacrificing Cool McCool.

Turns out this skeevy fellow with a dubious interest in John Wayne and even more dubious economic theories is named Reagan. Perhaps the Shield's world is more like ours than I thought.

Actually, John, you have a lot to lose. Your life; your wife; $25,000; that nice tux; and, if you just hang in there long enough, the opportunity to be reintroduced as a Batman's cousin at some point by E. Nelson Bridwell or Geoff Johns.  But some people are gamblers by nature, so tomorrow John will join other similarly-situated men in a class inaction suite called ...

I'm torn between Wayne's assumption that a man with the same taste in tuxedos must have a valid reason to burst into his men's room stall, and the fact that this is almost certainly going to try to be someone's memory of the Stevenson stories without the interesting parts. We're probably not getting a two-fisted undead Colonel Geraldine replacing Dusty on this mission. Reagan won't turn out to be the son of the Young (in the 1870s) Man with the Cream Tarts. No Dr. Jekyll prototype is going to stuff a hapless Silas Q. Scuddamore into a Saratoga trunk to rescue him.

And we're probably never going to get the contortionist backstory for Mike, either. Or the furry monster crawling around to different positions on Reagan's head, for that matter.

I like to imagine that, during the !mpact reboot, John Wayne was musing about his parents' death and wondering how he could make a contribution, when suddenly, through the picture window, a horse ("Personal Trifle," from the stables) flew through, inspiring him to become Horseman. And even Mark Waid didn't think that was worth putting into his Shield book...

"undead Colonel Geraldine"
Be careful what you wish for.