Joe "The Shield" Higgins has maneuvered Grigas, the president of the Suicide Club, into being the one who kills him in his disguise as Jim Phillips (with the understanding that Grigas will turn himself into the police afterwards, because CLUB RULES).

Naturally, Grigas tries to wriggle out of it because he's just a shyster with no interest in a murder rap; equally naturally, Joe insists, because he has what Freddie Freeman would call "bullet immunity".

Dusty emerges from wherever he's concealed himself in his decidedly un-stealthy outfit; 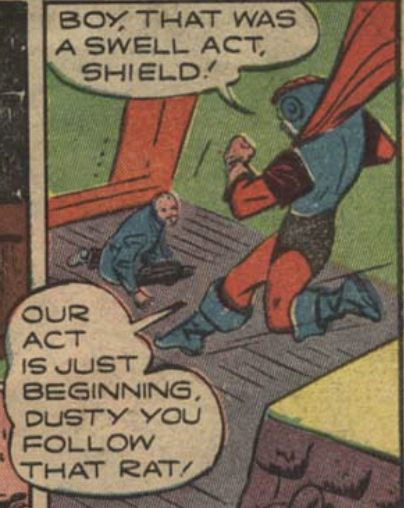 Meanwhile, Rogers, the other Suicide Club member who got the black ace, senses that the story is racing to a close and so, abandoning any pretense of arranging a death by comic book irony, just heads to the closest fatal traffic combo he can find.

But, as previously mentioned, interfering with transportation is the Shield's passion.

Now that he's flushed out the huckster out at the heart of it, Joe prepares to put fin to the Amway of autothanasia.

Meanwhile, in the back room of the Suicide Club, unsupervised and underage Dusty, the Boy Psycho, rushes to give President & Mrs. Grigas a sickening beating before the Shield can show up to stop him.

The Shield, sanguine at his protégé's savagery, is ready for the REAL fun:

emotionally abusing men who had were weak enough to be taken advantage of when they were already on the verge of suicide.

By subtle application of his innervation, I suppose, Joe, converts their despairing self-pity into righteous indignation.

Ironically, you'll notice that Grigas doesn't get executed (since he never actually killed anyone); he just gets life imprisonment.  Stills seems a little harsh; I was waiting for an amusing comic book irony panel when he gets sentenced to a lifetime of community service on a suicide prevention hotline while everyone else stands around laughing.

Stop bluffing, Joe; not even Dusty the Boy Detective believes you're adroit enough to rig a cut deck of cards. You throw cars around, light yourself on fire, crash through walls; delicacy is not your long suit.

"Err...Perhaps we could just skip the whole part where I face consequences for my actions?" Grigas is pretty spry in that tux, though; the club's tailor must be a genius, the MLJ counterpart of the Gambi brothers.

I'm still baffled by how Grigas pitches this scam, though. "I realize that you're destitute, depressed, and about to kill yourself. But how about--and hear me out on this before you react--you pay me some money, continue to live the life (less the money you gave us) that keeps you in despair, and maybe one day you'll be chosen at random to kill yourself, and the money you give us will be given to the members who never kill themselves? Eh? Eeehhh?" No wonder the Shield is able to turn them into an ex-millionaire street-gang. They probably lost less money gambling than they did buying magic beans...

Well, Grigas clearly attempted to murder James Fielding, and life imprisonment is a legitimate sentence for attempted first-degree murder. His henchman I assume could be charged with conspiracy to commit murder or maybe accessory to attempted murder? That would potentially explain his sentence.

I'm not sure how the Shield producing Fielding's naked corpse (presuming that he did so and didn't turn Fielding into a lamp or something) would affect those sentences or the trial. Clearly evidence was tampered with, and that would open up a wide range of potential defenses (Your honor, my client already knew that Fielding was dead and that the Shield, along with his accomplice, had stolen his personal effects! He saw right through that improbably elaborate disguise! My client was on the side of justice! The true criminal is the Shield and his vicious henchman with the beefy thighs!)

Truly, the Shield exists in a byzantine judicial dreamscape.