The Batman screenwriter asks "What if Batman was real?" in new comic book series

Pardon my ignorance but...
isn't that always the premise of Batman?

I swear if I had a dollar for every time some writer was trumpeted as taking the "novel" approach of writing "this famous character, but as if they were real, in the real world" I could PAY someone else to write this blog and then they could write me, except me as if I were REAL in the real world.
There has been only ONE "realistic" version of Batman. 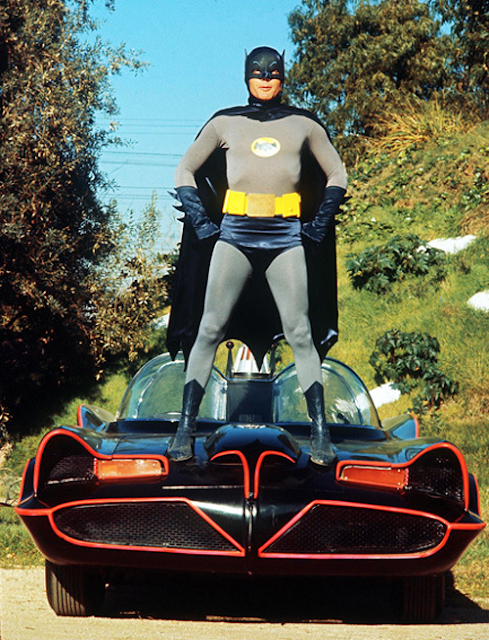 Because the question isn't whether BATMAN is realistic but whether the world's reaction to him is.  And fact, THAT is the only version of Batman the police wouldn't have shot years ago.
Posted by Scipio at 6:11 PM

Among other problems, this has got to be the absolute worst week/month/year for an actual paid writer to wonder what it would be like if an actual know-it-all billionaire decided to embark on a campaign of violent social engineering. I mean, if Batman was real, he'd be riding rockets to "the edge of space," because that's apparently what billionaires do and get taken seriously for it, somehow. Or maybe he'd donate tons of money to self-named charities (oh, wait, he already does that...) to convince people not to talk about the drug epidemic that his company is clearly responsible for.

And worse, we already know that the answer is never any of that. Realism is somehow always "he has sex with Catwoman and curses a lot," because that is more real than...I don't know, funding pre-K education and Superfund site remediation. Really extreme "realism" might include Batman fighting with broken ribs that he'll repeatedly count and tell us about in captions that are definitely nothing like thought balloons, even though a real human would sensibly stay home to recuperate. Oh, and he'll probably kill someone, because nothing is more real than murder, as evidenced by the body count all of us have amassed...I've said too much!

The funny thing is that there's actually plenty of space to make Batman more realistic, both in the sense that the character would fit better with reality and in the sense of being truer to the concept. But those changes would almost certainly be rejected at DC and by any writer interested in writing Batman. Like, dramatic as they are to draw, there are numerous reasons (impersonation, accountability, getting outed by Reddit fifteen minutes after he leaves the cave) that it makes no sense for Bruce to have a secret identity or a secret impregnable fortress stocked with super-weapons. And it's increasingly uncool to patrol lower-class neighborhoods (Crime Alley is not getting gentrified) looking for "thugs" to brutalize, while also beating up criminals who (a) are explicitly mentally handicapped, hence Arkham, and (b) seem mostly to just be looking to take down exploitative corporations or the jackass who beats their friends up and scurries away to his secret fortress to avoid accountability. It'd be far less exciting to draw, but...so is real life.

The cops wouldn't have shot him because I'd have beaten them to it. I hate that show with the heat of a thousand suns, and won't be happy until every last copy is made into guitar picks.

Found an interview with the writer in question, Mattson Tomlin, where he had this to say:

"Taking the question of 'What if Batman was real?' as far as narratively possible conjured incredible potential that hasn't recently been explored in the comics."

For starters, if Batman were real, Alfred Pennyworth would smack Tomlin for not knowing what subjunctive mood is. If you're a writer, you should know basic grammar.

But the main thing on my mind is, the superhero genre RELIES upon things not working quite like in the real world. It's a lot like saying "what if Harry Potter were set in the real world (including how there is no magic)?" Even if you're going to restrict your characters to non-powered types, you still need to think about how long someone would survive swinging from building to building via batarangs on silken cords. I'd say that character would be lucky to achieve five successful swings before falling to his death.

If Batman were real he wouldn't be wearing a bat costume, because criminals are not in fact are superstitious, cowardly lot, in which case, well, he wouldn't really be Batman, would he?

If Batman were real:

1. He'd need a suit of armor. Automatic weapons are a thing, and humans can't dodge bullets indefinitely. No swinging from buildings, no acrobats.
2. He wouldn't have a kid sidekick. Or an adult sidekick.
3. He wouldn't be able to hide billions of dollars in misappropriated funds for his armor and vehicles.
4. He wouldn't expose part of his face: See point 1.
5. He really wouldn't need a "Bat" theme at all (see Scipio's comment).
6. He would need a portable, long-lasting power source that is currently beyond today's technology.

So to sum up: If Batman were real he would be:

1. Iron Man. No secret identity and no hiding his activities or trying to embezzle billions from himself. We are postulating that Tony Stark did discover the arc reactor to provide the needed power.
2. Batman Beyond (still rocking the Bat theme for ... reasons). Still need a portable long-lasting power source.

The "wouldn't dress up like a bat" thing reminds me of the other cliché in the field. Chapter heading, presumably meant to be spoken aloud in a condescending, reductive voice: Is Batman...Sane?

There's a smart way to do this, diagnosing him from his avoidance of sleep, constant self-harm, recurring debilitating flashbacks to multiple traumatic events, constant pushing friends away, codependent relationships, obsession with control, projecting his fears and insecurities (in an unfortunate racially-coded way, now that I think about it), and so forth, and walking him through getting treatment. Dude definitely needs a ton of therapy, and probably medication. That study probably looks a lot more like Crazy Ex-Girlfriend than an action movie, maybe with fewer musical numbers. But it's never that. Instead, it's basically "he's a leather-clad furry!" and an assurance that it's either normal or something that he should be punished for...

Oh, and since Bryan brought up embezzling, it's worth pointing out that continuities come and go, but Ra's al Ghul rightly pointing out that any idiot can follow the paper trail of construction and equipment to the Batcave has never not been canonical, and yet, there isn't a mob of villains, journalists, Internet sleuths, number-one fans, and so forth constantly loitering. You get an occasional Bane or King Tut, but I guess everybody else is too polite.

I don't recognize it, but it looks like fun!