The Persian Jewel Mystery, Part 3: AM I RIGHT?!

To identify the robbery suspect in this case, Speed went to the Rogues Gallery; to identify the murder victim, he woke up the Dean; to identify the woman accomplice he goes to a beat cop.  In no case did he just say, "Name and ID, please."  No, I don't get it either, but my degree's not in ace investigating.

Why on earth does this gigantic beat cop who patrols the pub district know a floozy who hangs out with society swells? Because it saves time, I suppose.  Speed Saunders has no time for false leads.

I probably shouldn't assume she's a floozy, but I was just trying to save time, because that's what Speed does.

Speed is running out of patience with this Nora woman and her aggressively matchy-matchy apartment, with stolen curtains from the Persian restaurant he started the story in, where his date (Carol? Sure, Carol) is probably still waiting, patiently sewing red crescents on the breasts of her dress and making small talk with the manager about Persian antiquities.
Realizing he's up against a tough cookie, Speed pulls out all the stops here. Judgement Face, Accusing Colonel Mustard in the Ballroom with the Candlestick, Chiaroscuro, and a violent outbreak of Fred Guardineer Lines. Turns out it's all too much for her and she faints.

Was Nora drugged like the Consul? Or did she overdose on Speed? We'll never know, there's no time for that, because Speed is ready to wrap this case up.
Somehow Speed knows where everyone lives even when he doesn't know quite who they are.

It's a reveal so ridiculous, even the killer won't buy it.

Clearly, none of this makes any sense at all, and Bennet/Borden, being a man of strong will, rebels against the mad god Saunders, who is clearly simply bending reality to bring the story to close to meet his self-imposed deadline.

But Nora, symbolically costumed as a tin soldier, dutifully protects the mad god like a faithful automaton.

Speed 'makes a plea for Nora', which I don't believe for a second and you know she and her hat are going to jail for a nice long time but fortunately she's already got the dress for it. 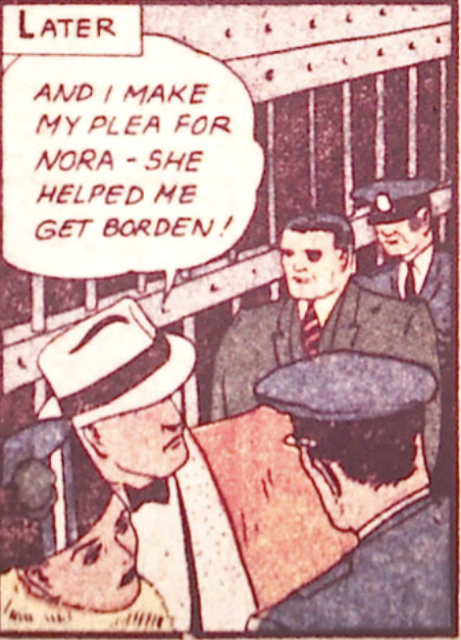 Then, just to make SURE that no one thinks otherwise, Speed breaks the Fourth Wall and TELLS YOU THAT THIS ALL MAKES SENSE AND YOU HAD BETTER AGREE.

Speed should take down the city's Curtain Baron. Whoever that mysterious figure is, they're making a killing on those giant-gingham check jobs. Someone needs to stop him before he gets to...I'm going to assume that it's "Randall's Pub." Floosy Fless might be one of his spies, for all we know!

The real question, though, is why we never got a Filmation Speed Saunders cartoon? His "abstract demeanor" would be perfect for saving on animation costs, and Saunders is clearly a big fan of the "hey, we sure learned a lot, today" button.

I guess Speed Saunders is what happens when detectives don't have sidekicks.