Usually, I pride myself on confining myself to discussing the inane (e.g., Dazzler), the irrelevant (Aqualad), and the unpopular (e.g., Vibe). But even I cannot resist the urge to discuss, well, the only thing anyone's discussing: Blackest Night.

I should hate it. I mean, really: zombies? [Of course, they're actually revenants, not zombies in the classical voodoo sense, but thanks to all those movies, everyone calls revenants 'zombies' nowadays.]

1. The proper groundwork has been laid. Lordy, the roots of this story are deep within the DCU's history (including elements that I can't mention because they would be spoilers for some inevitable reveals about the Black Lantern). Plus, writers (well, Johns) have built this story brick by brick out of recent year's developments and intentional additions (the death of the Dibnys and many others, the Spectre's punishment of Black Hand, Parallax, the 'emotional color spectrum', the Sinestro War, "Engine City", Xanshi, JLI, the trouble between the Hawks... really, just about everything). This doesn't feel like some external "event'' imposed upon the DCU by editorial fiat that doesn't jibe with anything else. Quite the opposite; it pulls together many loose threads in the DCU and puts them in a overall context that helps it all make more sense and seem more cohesive.

2. The metatextual element. I appreciate when DC takes advantage of an 'event' to do more than simply tell a story. Legends, for example, made complex points about heroism. Blackest Night is a commentary (criticism?) of comic books' Revolving Door of Death. As longtime readers may remember, I am an admirer of the Ivory Soap Method of marketing. "Blackest Night" is an astonishingly bold example. DC has said, "Let's take out two most damning criticisms == that we violently kill off our characters with foolish abandon and that we keep bringing people back from the dead == and make those the central issues in our coolest company-wide story of all time." That's sheer genius.

3. It's not zombies; it's zombies with power rings. Which is, um, totally different. Somehow. It makes you wonder: what side is Driq on?

4. The possibly of fixing, well, almost everything. Ever since 1985, I've been waiting for DC to "fix everything". Crisis on Infinite Earths was the first time DC told me they were going to give themselves a chance to fix everything that needed fixing. I remember being very excited by the idea that DC would "fix everything" by eliminating everything dumb (which is to say, Things That Didn't Make Me Happy in My Comics) and reorganizing and reemphasizing everthing cool. They didn't, of course. Like any legislative body (such as Congress), DC's editors focused too much on changing the situation they didn't like (accumulated Bronze Age continuity) and too little on the new situation they'd be replacing it with (post-Crisis continuity). They gave themselves another chance during Zero Hour (but didn't really fix everything). They gave themselves yet another chance with Infinite Crisis (other than bringing back Barry and Bart Allen, no one has any idea what happened there).

Now, in Blackest Night they have a chance to fix, well, not everything, but almost everything (since most things that "needed fixed" are the pointlessly sensational killings off of characters). I continue to hope that DC will use this opportunity to fix things, much as a battered wife returns to her abusive husband confident that he's sorry, he's changed, and this time it's going to be different. However, this time, I have some evidence on my side: certain things pretty much have to be fixed. Specifically, the currently-dead status of Bruce Wayne and Arthur Curry.

I'm not going to get into an argument here about whether these characters should remain dead and whether DC heroes are really legacies, blah blah blah, and neither are you. Because, frankly, our chatter doesn't really matter. It's just a fact: Bruce Wayne and Arthur Curry aren't going to remain dead, and anyone who thinks otherwise is just being naive. Superman, Wonder Woman, Green Lantern, Flash, and Green Arrow didn't stay dead and neither will their two colleagues (J'onn Jonnz? Him I'm not so sure about...).

So, some characters are going to come back from the dead as a result of Blackest Night. That means, in theory, that ANYONE can. Which means, of course...

Okay, as previously mentioned, the Martian Manhunter went from weird to weirder when he left Detective Comics for House of Mystery.

Now, I know you all think I'm INSANE ("Mad! So, my colleagues think me mad, eh...?!") for harping on the insidious evil of SURREALISM lurking with comic books, yet surrealism is exactly the new foe that J'onn was pitted against.

There was a certain bizarre logic to it. No one ever had any idea what to do with this ridiculous Martian character they'd cobbled together out of breakfast martinis, deadlines, and old pulp sci fi mags. For that matter, no one ever has. Might as well have him fight equally bizarre and ridiculous 'foes', in a symbolic struggle of classic art versus surrealism, or as a metaphor for humanity's never-ending efforts to impose meaning on a chaotic world. Who better to thrust in unknown and nonsensical territory? 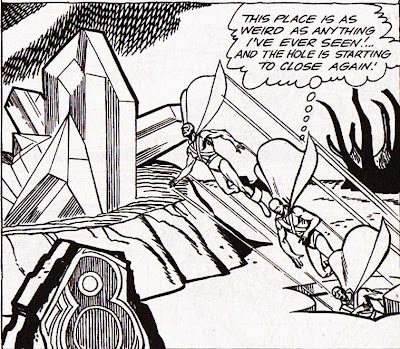 J'onn was no longer fighting crooks in ties or even crooks in stupid costumes. 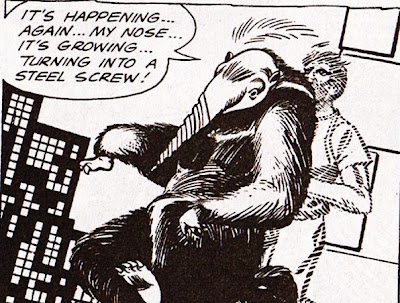 Even for comic books, that's a stand-out sentence. 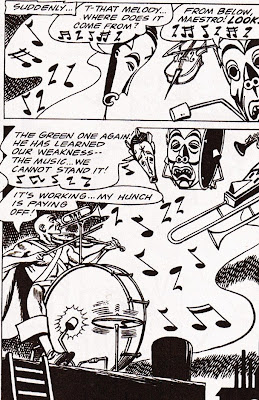 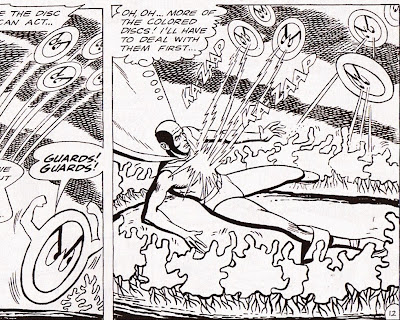 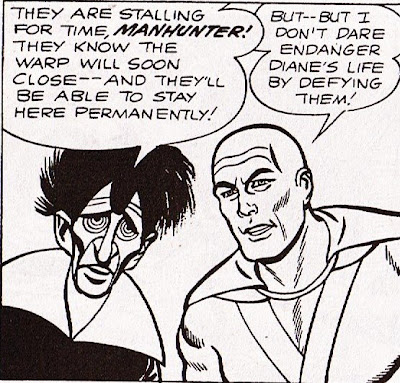 But it was all a battle against SURREALISM, in a vain attempt to keep its madness confined to the canvas... 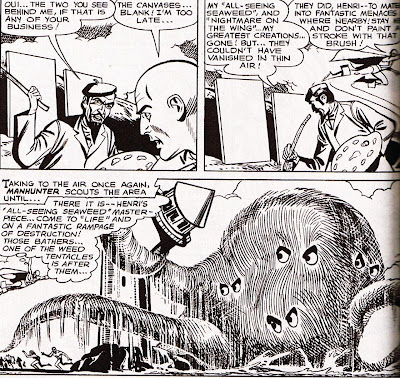 See? And you think I make these things up...!
Posted by Scipio at 7:44 AM 5 comments: Links to this post 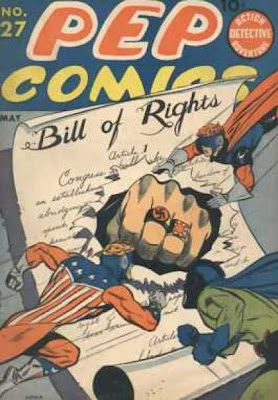 Or, sure, you've got the usual "Shield Rushes in From Stage Right" pose, the "Dusty Falls From Nowhere" thing, and the "Why is the Hangman Always in the Way" scene. But really, a giant fist of metaphorical tyranny, after they already fought the giant foot of metaphorical tyranny on the cover of Pep 22? What's the Shield's fascination with giant body parts all about, huh?

Punching through the Bill of Rights? Is this a Pep Cover or a pamphlet from the Cato Institute? Or, given the Shield's level of kink, from the FFA?

I do, however, like the idea that world-threatening political movements that destroy civilizations and slaughter and torture millions have little logo rings, and logo stamps to put on the bottom of your world-stomping jackboots, and probably other little trinkets, like keychains, and bracelets that say, "What Would Adolf Do?" Now we know where Archie got all his ideas for the Archie Club.

If only the Shield & Co. had recognized the threat of Archie and neutralized it before so many generations of young minds were destroyed. I blame Neville Chamberlain and John Goldwater.

Posted by Scipio at 6:56 AM 4 comments: Links to this post