The first in an on-going series. 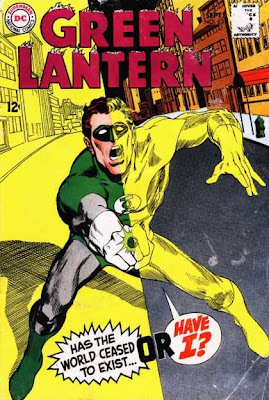 Solipsism is the philosophical idea that one's own mind is all that exists. Solipsism is an epistemological or ontological position that knowledge of anything outside the mind is unjustified. The external world and other minds cannot be known and might not exist. In the history of philosophy, solipsism has served as a skeptical hypothesis.

Because it's all about Hal, you know.

Other famous solipsists include A.E. Housman, God, Archie Andrews, and Stan Lee.
Posted by Scipio at 9:49 AM 7 comments:

The best comic you didn't read this week was Greek Street (and it only cost a buck).

Greek Street is shaping up to be a gripping crime drama, and, since you're not reading it, it's going to become one of those Vertigo classics where you're trying to catch up when the trade comes out, because all the Cool Kids at the playground have been already been sliding sly references to it into their jump-rope songs and smirking at your sidelining ignorance.

It's also a re-telling of many Ancient Greek myths. For example, in the opening story a guy named Eddie takes an unorthodox approach to getting in touch with his birth-mother. And the Greek chorus is a trio of strippers ("chorus girls"). As you imagine, I like this a lot.

Haiku is not a literary form usually associated with Greek myth, but I guess the old stories naturally fall into poetic rhythms. Here, Sandy's brother, disturbed by his sisters manic ravings (which, you know, could not possibly be accurate prophesies, or anything) advocates for her institutionalization: 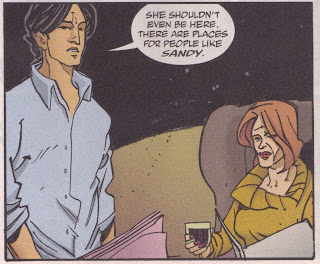 She shouldn't even
be here. There are places for
people like Sandy.

What haiku can you compose to celebrate Greek Street and this interesting revitalization of the old stories in comic book form?
Posted by Scipio at 1:07 PM 3 comments:

Pep 26: What Rings Their Bell 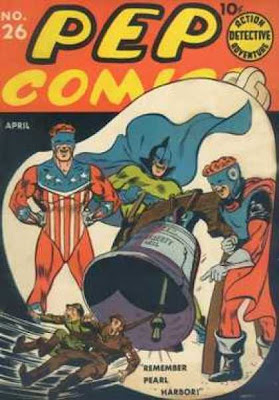 Well, finally we see what it takes to make the Hangman, Shield, and Dusty laugh:

the torture of prisoners of war.

And given his stance, I shouldn't be at all surprised if the Shield is planning on giving them a very special shower of ritual humiliation in the near future.

Special note to Dusty. You shouldn't laugh and point at other people. Particularly not in that outfit.