Tempest in a Teapot 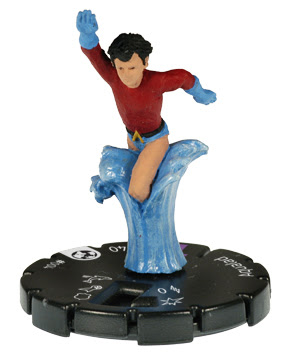 You know, for an ichthyophobic, big-headed, purple-eyed freak....


he turned out pretty well. 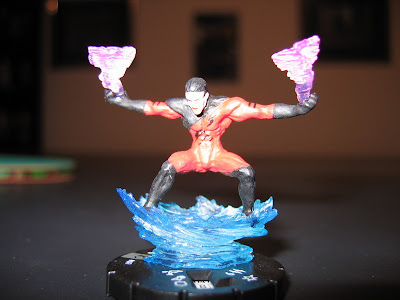 I made a custom pog a while ago of Congo Bill, because, of course, Wizkids would never ever make a pog of Congo Bill.

And yet they have.

AND IT CHANGES INTO CONGORILLA.

Superhero Marriages: what do you think?

You have no reason not to buy Nightwing.
Posted by Scipio at 11:42 AM 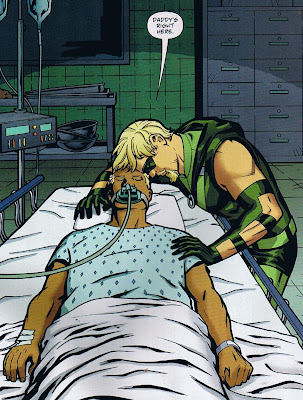 Let's talk about this, shall we?

But I do enjoy Black Canary/Green Arrow, and how the book has help humanize and redeem him for me. I have always been kind of peeved how his absentee fathering of Connor Hawke has been sloughed over or whitewashed. This most recent issue tackled it head on, and showed that, no matter what anyone else thinks about it, including Connor, Ollie feels guilty about it, and deservedly so. That's once of the most decent, human things done with Green Arrow for some time.

That said, I am cheesed by the hacky plot non-resolution of Connor's shooting. He's not dead. But neither is he alive.

Boo! Hiss! Get off the fence! The only thing in the middle of the road is roadkill!

Honestly, I have no strong feelings about Connor himself. If someone had ever had the guts to make him gay (or stopped a certain someone from preventing him from being gay), I might care more. But they didn't.

Sure, I like him more than I like Ollie, but what human being wouldn't? Connor was calm, loving, fun, competent, etc. But for the most part, I just think of him as another failed "Earth-8" style replacement for a Silver/Bronze Age icon.

He is, however, a GREAT Heroclix figure.

Sadly, I feel that Connor has been offed, at least partly on account of the cruelties of the Dynastic Centerpiece Model (which longtime readers will recognize as one of my pet concepts). DC has been (re-)building a dynasty around Black Canary (Female Counterpart) and Green Arrow (Centerpiece). Red Arrow (Junior Counterpart), Speedy II (Youth Sidekick), Black Lightning (Ethnic Counterpart); they all had a place... .

But Connor didn't. Red Arrow fills the Junior Counterpart slot, and with some 60 years of seniority, isn't easily dislodged from it. Connor literally had no role to fill in the Green Arrow dynasty, once his original role (as replacement Centerpiece) was taken from him.

Personally, I think that's a mistake. One of the slots in the Dynastic Centerpiece Model is the "Black Sheep". I think that's where Connor should have fit in. Not because he's the "naughty" version of Green Arrow. Quite the opposite; Ollie's the jerk, so Connor made a perfect "white sheep", so to speak. In the same way Wonder Woman has a Male Counterpart (Hercules, by they way) in her dynasty rather than the regular Female Counterpart, in the Green Arrow dynasty, Bad Boy Ollie Queen would have a "White Sheep" in his family: Connor Hawke.

Usually he was written that way, too. Why wasn't that enough to warrant keeping him? I guess Judd doesn't read my blog (*Silver Age sob*!).

But setting all that aside: killing him is one thing. Bringing him back from death's door (which has been done several times already) is another. Repairing his body but leaving him brain dead as a result of some absurd "poisoned bullet" macguffin, however, is nothing. Unless Winick goes somewhere fantastic with this (like he did with Ollie getting stabbed in the throat by his bride on his wedding night), it seems like a grand cop-out. Show of hands if you're confident Judd's going to go somewhere fantastic with this...!

Let's see, as I recall the recent storylines for Black Canary and Green Arrow, they've been:


Was it necessary, wise, or imaginative to follow those immediately with a "Humanize the Series Principal #1 by showing his reaction to losing someone close" story, where Green Arrow loses Connor?

Does Judd really only have one story to tell us? If that's the case... well, I enjoyed it the first three times. Now, it's time for someone else to write a different story... .
Posted by Scipio at 10:54 AM 12 comments:

Not all Heroclix players are interested only in huge donnybrooks; I'm a big fan of 200 and 300 points games without any flying bricks.

With the new Crisis set comes out (VERY soon!), I'm already thinking about fun little team to compose. Such as...

Back in the day (that means the Silver Age), Aquaman and Green Arrow could not get enough of each other, and were showing up in crossover stories constantly.

So, putting Aquaman and his sidekick (that big-headed, purple-eyed, ichtyophobic freak, Aqualad) on a team with Green Arrow and the original Speedy (The Boy Whose Indian Origins Have Been Forgotten) is irresistible to me.

It's also not a bad power combo. The Arrow guys have long-range powers; the Aquaguys have short-range powers, like Charge and Superstrength. Green Arrow and Aqualad both have stealthy powers, so Aquaman and Speedy can use them as cover. Not an unbeatable team, but workable against another 200 point team (that's not teeming with superspeed, invulnerability, or stealth).

Unfortuantely, while the 70 point Aquaman is a fun dial, but the sculpt is that of Artie Joe, the Fake Aquaman. Oh, well. You can swap him out for the Starro-Slave Aquaman if you want; he's the Real Aquaman, he's also 70 points, and if you don't look at his echidnodermic puss, he looks great.

Naturally, anytime you use Green Arrow, you want to use the 50 point one; he's SO much better the 42 point one it's not even funny. But there are only so many points to go around on a 200 point team!

For some further fun, throw in the Starro Slave version of the Flash (70 points) and the forthcoming Kid Flash (45 points), swap out the 42 pt GA for the 50 pt one, add a GL and you get...

A BARREL OF SILVER AGE FUN 400 points
Okay, I'm cheating again; the 80 point GL is Kyle Rayner, not Hal Jordan. But, heck just put Hal's sculpt on it, and you're set for some Silver Age Fun. Or, you can use the Starro-Slave version of Hal Jordan; that's only 70 points, and you can add 10 points worth of Feat Cards. Or, if your really into it, add Itty, Kiki, and either an Octopus or a Jellyfish.

OR, if you'd like to take it to the next level, lose the pogs and go for:

Then throw them up against 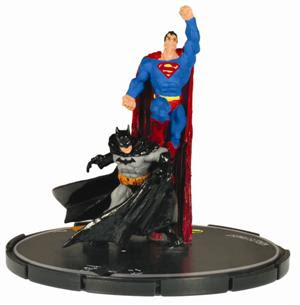