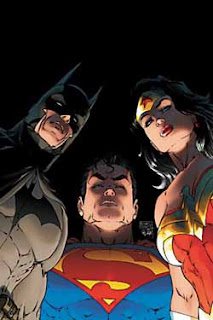 We are used to thinking of Batman, Superman, and Wonder Woman as "the trinity" of DCU. That's based on their being the three most consistently iconic and well-known of DC's characters. But it's more that just that, isn't it?

DC, being DC, isn't content to simply say, "These are our three most popular characters." DC seems to intuitively understand that for mere characters to be actual icons, they need to stand for something. Not simply the generic Good Guy message of "Be Good and Beat Up Bad Guys", but something unique. But since their acknowledgment as the Big Three, editorial attempts (whether conscious or not) have tried to distinguish among Batman, Superman, and Wonder Woman as three points of a conceptual triangle.

These attempts have met with varying degrees of success. The differences in outlook and style between Batman and Superman have been beaten to death so thoroughly in so many places -- for that matter, on any single page of Superman/Batman -- that I have no desire to retread them here. Attempts to shove Wonder Woman into that tightly bound conceptual dyad have been spotty and rung less true.

One of the most promising attempts was position here in direct opposition to both Batman and Superman over the killing of Max Lord. Batman and Superman, whatever their differences in style, are both very much products of our society. As vigilantes, they are willing to use their abilities to bring criminals to justice, but not to carry out punishment, which is in the purview of society as whole, not an individual. Wonder Women is a classical hero from an entirely different society; they kill monsters and threats to civilization.

But even that distinction seems to have broadly overlooked. Besides, it's not really a "triangle" in any meaningful way; it's just Wonder Woman's worldview versus The World's Finest's. Regardless, I myself have my own perceptions of the differences between them, and likely you do, too. One I would like you to consider is how the Big Three represent three different models of the nuclear family.

To put it more directly,

2, 1, 0. This is a real, built-in difference among the three characters. It's not one that's been superimposed through later interpretation; it's part of their origins. 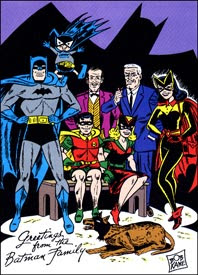 In some ways, this basic difference resonates through their characterizations. Batman, the orphan, is all about building a family. You know: adopting circus kids, street urchins, the neighbor's kid, the neighbor's kids' girlfriend, mute loonies and religious nutjobs, lost dogs, wayward librarians, obsequious imps, mechanically-minded hunchbacks, even Halo and Geo-Force. Whoever. Batman's like the Old Lady With the Houseful of Straycats.

Forget all that "long figure of the night" BS some writers try to hand you; Batman is the character, who, almost immediately after he was introduced, abandoned that shtick to hang out with a kid in green pixie boots.

For obvious reasons, Batman does not take family for granted, and, of all the Trinity, has been best at forming a (rather non-traditional) family and acting as its head. 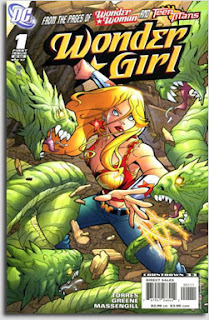 Wonder Woman, on the other hand, is the child of quite literally a single-parent household. As such, she was clearly raised with independence in mind. Wonder Woman has been good at making friends and colleagues, but, unlike Batman, she's never seemed moved to form a family around herself.

I can count on one hand the number of times I've see her paling around with Donna, her sister. She's been seen with Wonder Girl (Cassie Sandsmark) often enough, I suppose (though it's certain nothing like a "Batman & Robin" relationship). But much of Cassie's training was farmed out to warrior-nanny Artemis. As this last issue of Wonder Girl made clear, Wonder Woman's focus has always been helping Cassie become an independent woman and warrior, able to choose her own path, rather than treating her as a sidekick or a partner. 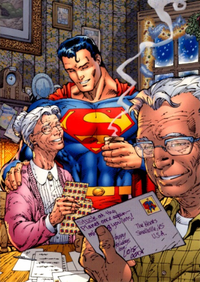 Superman? Well, I've never really forgiven him for unceremoniously dumping both Matrix (look that up, kids!) and then Superboy (who was genetically his SON, for Rao's sake) on his parents. But recently I've softened on that, as a result of insights gained from reading Kurt Busiek's stories where he and Lois have essentially adopted the orphaned Chris Kent. Clark is from a two-parent family, and that is his irreducible model of family. It simply wouldn't occur to him to try to act as a single parent to either Matrix or Superboy; a child needs two parents, Clark would feel. Only now that Superman has a wife does parenting seem like an option to him.

So, while the members of the Trinity represent different models of family, there is something those models all have in common: they are built around the idea that family is more than just blood. Batman and Superman lost their birth parents; Superman was adopted by other, Batman adopts others. The youngsters they have charge of aren't their blood relatives but they've made them their sons. Wonder Woman was created by her mother, but not born of her; her "sister" isn't really her sister by blood and neither is the new Wonder Girl.

Whatever else they may represent, the Trinity stand for the idea that while families come in different mode, they are made by choices and time spent together, not just genes... .
Posted by Scipio at 11:32 AM

I don't have anything to contribute here except to say that this is an excellent post.

This is why I read comic blogs - to occasionally have my mind blown when someone produces something that so perfectly captures what I've always wanted to know about the characters.

Nice. I think that you have hit upon something quite interesting here.

Well, this was a classic Absorbascon post if there ever was one. Great food for thought.

I do love your final moral, specially, about family being so much more than blood relations.

Like so many other gay men, this has been a reality in my life for the last 20 something years (as accommodating as my blood family has been all along ), and something that I come back to all the time.

So, it seems that gay men attraction to WW could go a little beyond the obvious diva worship and glamour love.

Gail Simone seems to be going in the direction of making Diana the product of an "It Takes a Village" approach of child rearing, but the behaviours you note really do match well with your interpretation of their backgrounds.

Really interesting observations, Scipio. Thanks for sharing them.

Great analysis. I will steal this, some day, for my radio show, with your permission. Which would be, then, not stealing...

Right on, man. That was really insightful.

Very nice stuff. I would add that Superman seems to be in a state of arrested childhood, not willing to become a 'parent' himself as long as his foster parents are around.

It's a sharp contrast with the silver age superman who lost his birth world, lost his foster parents and, as a result, never, ever, EVER let anyone get close to him. He was constantly distancing himself from Lois and the gang, making Clark less and less lovable because he had lost everyone he was close to.