Three famous trophies are displayed prominently in the Batcave in Batman 657: The Giant Penny, the Robot Dinosaur, and the Giant Joker Card. 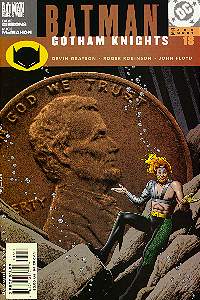 The Giant Penny, as we have repeatedly discussed, is a remnant of the "Case of the Penny Plunderer" (World's Finest 30, Aug/Sept 1947) starring Joe Coyne. Note that the year of penny is "correct", that is, the same as the year the story was published. I love Joe Coyne.

The Giant Penny is the centerpiece of a memorable Batman/Aquaman "team-up" in Gotham Knights 18 (Aug 2001). Batman is bored and lonely, so he calls Aquaman to come help him get the giant penny unstuck from where it fell during the NML earthquake. It's your typical overly personal Devin Greyson story, but it's a wonderful portrayal of what a nice and understanding guy Aquaman is when people aren't trying to turn him into Namor.

The Robot Dinosaur is a trophy from the story "Dinosaur Island" (Batman 35, Jun/Jul 1946; reprinted in Batman 256); a millionaire entrepeneur ("Murray Wilson Hart") built a "Jurassic Park" style island (except the dinosaurs were all robots), which a criminal tried to use to kill Batman & Robin. He failed. 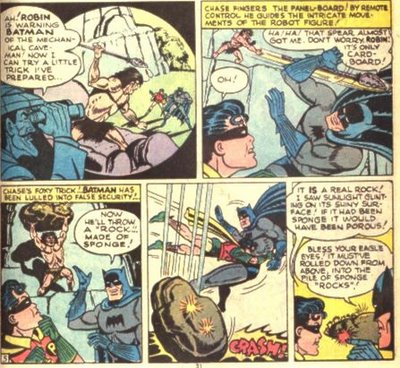 Unlike its two constant companions, the Giant Joker Card does not come as a trophy from an actual story. It was included in some early drawings of Batman's Hall of Trophies as a "generic" trophy that readers would automatically understand came from a clash with the Joker.

Originally, the three trophies were not housed in the functional part of the Batcave. The Batcave had a special locked room called the Hall of Trophies, where Batman & Robin kept souvenirs of their cases, usually in glass displays (introduced in Batman 12, Jul/Aug 1942). 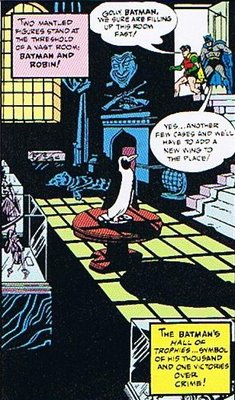 Even as a child, I knew that sunny window in the Hall of Trophies made no sense. Fabulous lighting effect, though.

The Card, the Dino, and the Penny were large, and therefore were often the main objects visible in any drawing of the Hall of Trophies. I'm not certain when, but at some point it seemed there was no longer of separate Hall of Trophies per se, but rather, trophies were now displayed throughout the Batcave. As I recall, during that period when Bruce shut down Wayne Manor and was living atop the Wayne Enterprises Building, his mini-Batcave under the building still had the Card, the Dino, and the Penny, despite the unlikelihood of Batman carting his three largest trophies into the city. Alfred; call Niecy Nash.

In Batman 657, Robin defends himself against the Bat-Brat by using another trophy, the bulletproof vest of Peter Rafferty, one of the three "Brothers in Crime", whose tragic tale was told in the same story that introduced the Hall of Trophies ( Batman 12, Jul/Aug 1942). 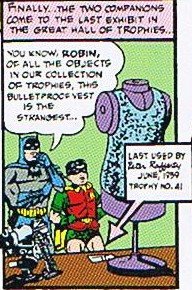 Back to the fight scene in Batman 657! As for the giant dice you see in the background, we see those for the first time in the Batcave in that great "Hall of Trophies" story, "The 1001 Trophies of Batman" (Tec 158, Apr 1950). Batman & Robin accidently smuggled a criminal into the Batcave in the trunk of the Batmobile (those were simpler times indeed). This fellow --named, I kid you not, "Dr. Doom"-- hid in their 1000th trophy, a sacrophagus. When he emerged, however, he found himself locked in the Hall of Trophies, so he rigged the trophies to kill Batman & Robin when they returned. He failed.

The giant dice were supposed to have rolled out and crushed Robin, but killing the Sensational Character Find of 1940 is harder than it looks (isn't that right, Dan?). In fact, one of the trophies killed Doom -- ironically, the very sarcophagus he was smuggled in. I love comic book irony.

I can't quite tell from the art in 657, but I think the trophy that Robin is lying next to on the last page is the very sarcophagus that killed Dr. Doom; if so, it's a nice touch. On his other side is, of course, the "Bat-Man" costume that Bruce's father once wore to a costume party (which clearly made an impression on young Bruce).
Posted by Scipio at 6:29 PM 13 comments:

To Chuck Dixon, With Love

Because they consider me an expert in such matters, the Association for Salacious Panel Reinterpretation appealed to me to arbitrate an internal dispute over which is the gayer Aquaman panel...

J'onn dragging Arthur out clothes-shopping together? 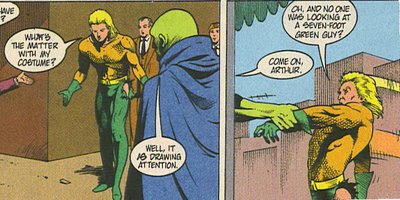 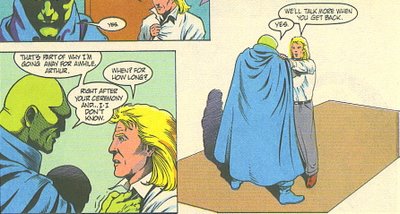 Thank goodness they called me! I was able to settle the matter easily by pointing out to both sides that the answer was clearly ... 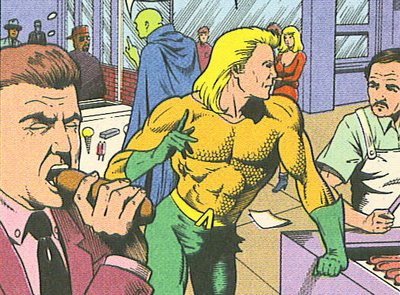 Panel courtesy of Tom of Finland
Posted by Scipio at 11:12 AM 16 comments:

If you live in the Washington area (as I do), consider attending the International Comic Arts Festival at the Library of Congress.

It has an interesting and varied program over several days in mid-October, which I and the Big Monkey staff will be attending. See you there!
Posted by Scipio at 12:40 PM 1 comment:


As time goes by, we've been helping our friend Brad Meltzer identify the important notes to hit in any run on Justice League, the unmistakeable clues one is in a JLA story. The clues we've established so far...?


To those we now add the eye-popping Limbs-a-Go-Go!

Yes, when you're a regular person like you or me, your body parts all pretty much go wherever you do. But, Justice Leaguers, hey, there's less to them than just the sum of their parts.


JLAers body parts pretty much have lives all their own. 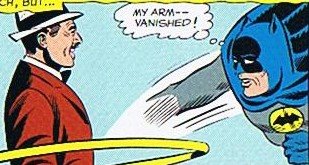 Who'd have thought a common (if well-dressed) thug could so easily disarm Batman?

Sometimes they just take off for parts unknown for days at a time. 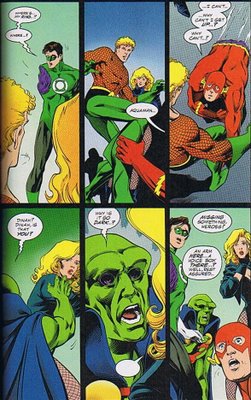 Sometimes a few are left behind to mind the fort. Or, you know, play charades. 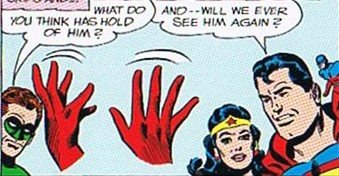 But it's just one of those JLA things; the Leaguers all get used to it. 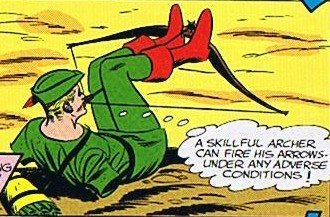 Ollie, a windy day is an adverse condition;
I think armlessness merits a higher rating, like "horrible permanent maiming".

Being JLAers they not only rose to such occasions but even used them to their advantage.

And the winner for "Best Pick-Up Line Used On A Colleague" is...

While the Leaguers were busy doing their jobs, their errant limbs would sometimes get together socially. 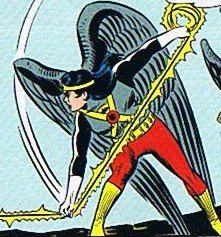 Try not to picture it naked.

They get a bit wild on occasion, and after partying, they have trouble finding their way back home. 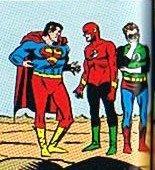 As a comic book store owner and comic book blogger, it's important that I'm on the cutting edge of the latest developments in comic publishing. That's why I'm hep, I'm with it, I'm "now". 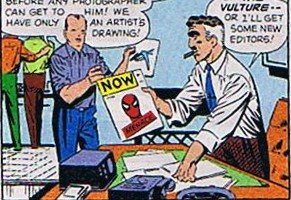 What really helps me is reading Now Magazine, from that renowned Manhattan hipster, J. Jonah Jameson


Anyway, so I thought I'd make you all wise to this new "Spider-Man" character; if you haven't heard of him yet, you will! I know about these things, because I read Wizard.

Here's the Spider-Man now in his civilian identity as "Peter Parker", updating his journal of substance abuse problems. Note that spider-peripheral-vision allows Peter to write at a 90 degree angle to his eyes; Superman can't do that! 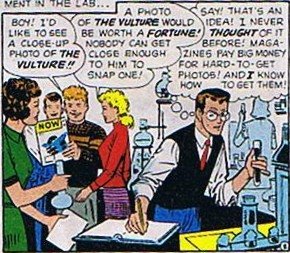 "So, by combining 3 parts cough syrup to 1 part Vicks vaporub,
I achieved a high of 7.8 on the Leary Scale for approximately 5 hours..."

According to that panel, newspaper photographers are paid a fortune for their photos; I had no idea. Cool; Jimmy Olsen and John Schenkel, dinner's on you! Why, if Peter takes "pics" of his fights with villians, he'll be rich practically overnight and never have anything to worry about! Maybe even get to marry a supermodel.

Oh, and this is the "Vulture" fellow they're talking about: 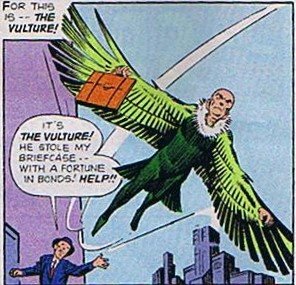 The Vulture; when it absolutely positively has to be there overnight.

Meanwhile, Peter decides to use his amazing spider-powers for personal gain. 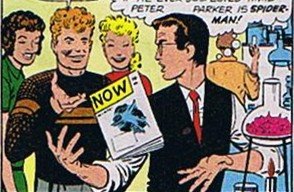 "With concentration, my amazing spider-levitation can suspend this magazine in mid-air!
I hope the school hunk is impressed!"
Note that, like other hipsters, Peter reads Now Magazine.

I only read Now Magazine for the articles, but Peter loves the centerfolds, much to the chagrin of young Mr. Weatherby. 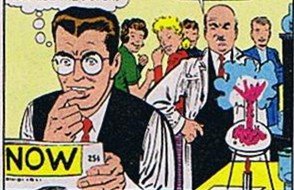 "Nancy Sinatra's almost as hot as her dad!"

Peter, by the way, lives with an aged aunt who stooped for decades in the strawberry fields of Staten Island just so her husband could afford a "miniature" camera; then he died. 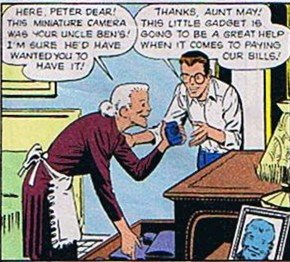 "I'm deaf, you know," Aunt May says;
"You'd think there'd be nothing else wrong with me."

But the Vulture announces his own plans. 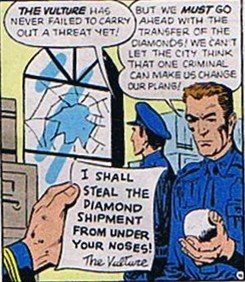 "We can't let the city think that one criminal can make us change our plans!"
says young southpaw pitcher, Officer G. W. Bush.

The Vulture decides to get rid of Spider-Man, whom he mistakes for someone else. 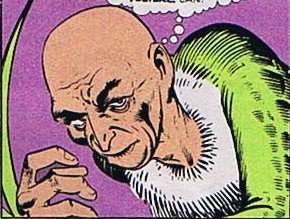 After knocking him out with three martinis, the Vulture carefully carries Spider-Man so as not to drop him from a great height; that would be "almost too easy." 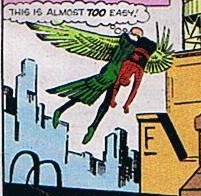 Nothing spells "Spring in Soho" like the sight of an old vulture
carrying off an unconscious teenager.

Instead he puts Spider-Man in an unguarded, unlocked water tower which Spider-Man cleverly escapes by.... opening the lid! 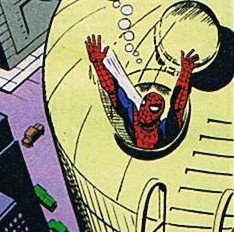 "Great webs! Thank Arachne for my amazing power of spider-lid-opening!"

Barely escaping his defeat at the claws of the Vulture, Peter suffers a crisis of conscience, worried that it was due to his addiction to amyl nitrate. 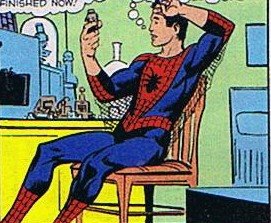 Swearing off the hard stuff, a cute and clear-headed Peter is able to snag himself a, um, "patron" who likes Peter's photos, which he downloaded from his profile on BoyToys.com. 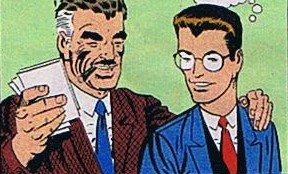 Sometimes a cigar is just a cigar. This is not one of those times.

Emboldened by this success, Spider-Man goes to the local piano bar, where he picks up the Vulture on the dance floor. 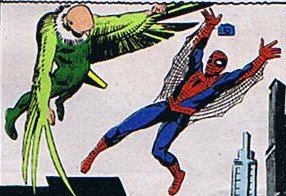 Apparently, Kyle Rayner isn't the only hero
who dances with his arms above his head; you go, Peter!

Suddenly, Spider-Man whips out his little gadget, which sends the Vulture reeling!

As you would imagine, Peter's Little Gadget makes the Vulture lose control and they tumble together. 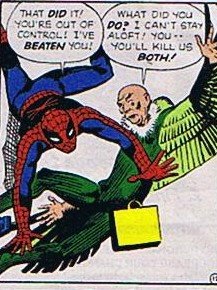 Okay, I give up; how DID Spider-Man nullify the Vulture's ability to fly?
Stan Lee; call me!
Posted by Scipio at 8:58 AM 20 comments: