And I mean that both figuratively and literally. 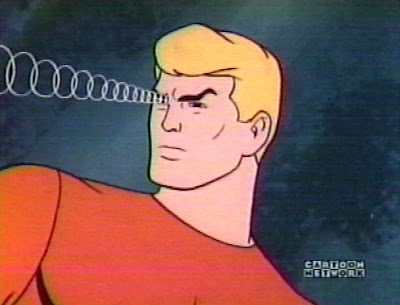 Like most Aqua-philes, I am all a-twitter about the (supposed) revelation that Geoff Johns will be writing Aquaman next year, and writing him as the head of the Justice League.

Is this truth? Does it mean GJ will be writing the "Justice League" and it'll have Aquaman return to whip the current cast of also-rans into shape? Or will his Superfriends rejoin? Or does it mean that there will be a new Aquaman title, GJ's writing it, and Aquaman's role as JLA leader will be explored there? Or is all this just something that will be noted in passing as GJ writes Aquaman in some other book, like Brightest Day?

I don't know exactly what is The Truth; but I know that GJ writing Aquaman is The Good, and that's close enough for me.

As I've written before, seriously and not so seriously, Aquaman is a leader, a commander. Other heroes, in their private lives, have substantial but typical roles: reporters, policeman, military, scientists, engineers, architects, billionaire playboys. You know, the regular kind of people who show up at your high school reunion.

But in his private life, Aquaman rules an undersea continent. Or, every living thing in the sea. Or both. Aquaman is not just powerful as an individual, but as someone who directs the collective power of others. As powerful and interesting as his colleagues are, they are, for the most part, solo acts. As such, they are not as well suited to lead the JLA as someone who is all about command.

Ever watch the Filmation Aquaman series? Do you remember the one thing Aquaman said in almost every episode? It was...

"We need help."
To the naive, that may seem like weakness: Poor "lame Aquaman" can't handle anything by himself and needs fish to save him. To the experienced, that shows that Aquaman is a leader who realizes he can accomplish more and do it more effectively with the help of others. And, isn't that the concept at the very core of the Justice League? Or any team?

Alex Ross recognized this when he made Aquaman the tacit leader-among-equals in Justice. Geoff Johns recognizes this, too. Even the Silver Age writers of the Justice League had a sense of Aquaman's unique role , as you can see by The Time Aquaman Defeated Felix Faust When Everyone Else Was Helpless, or the time when the JLA were each pitted in individual death contests on alien worlds, and it was Aquaman who coached every single one of them to victory.

Even the Batman: Brave & the Bold series version of Aquaman, who is known mostly for his boisteriousness, is portrayed as someone who intentionally inspires others to heroism and who coordinates other in heroic escapades (as in the episode on planet Rann).

To those who say Aquaman cannot be saved, here's a reminder. Not that long ago, Barry Allen and Hal Jordan were dead characters, both in and out of story. All it took was someone to identify their characters' essential features and build around them to bring them back better than ever. That someone was Geoff Johns, and I'm hoping that his perceptiveness in that regard will help make Aquaman the Sensational Character Find of 2011.
Posted by Scipio at 11:32 AM 9 comments:

You're a Mean One, Iris West

Oh, I know I've made my point about Iris West. In fact, I was at a party last weekend, and a guy I didn't even know was a reader of my blog recited for me the exactly characterization of each of the Silver Age Girlfriends, quoting from memory from my post on the subject. It made me proud of my role in perpetuating negative stereotypes of characters whose past behaviors DC has been trying to whitewash in recent years; you're welcome, ladies!
But some points bear repeating (as the apparent memorability of that post has proven). And the point that Iris West is meaner than most DC supervillains is one of them.


And what better way to make this point memorable than by setting it to song, as we did, say, with the Central City Song? I know it's bit early for a Christmas song, but I want you to have time to teach this to children before the holiday season begins..

Open this karaoke link in another window and sing along, won't you?

You're a mean one, Iris West;

you really are a shrew You're as cuddly as the Axis, 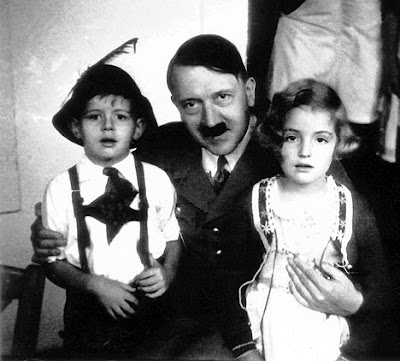 you're as welcome as the flu. 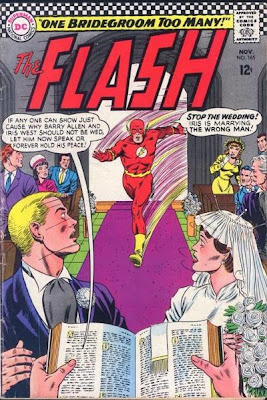 Iris We-est! You're a bad banana under Flash's boot heel.


You're a monster, Iris West; 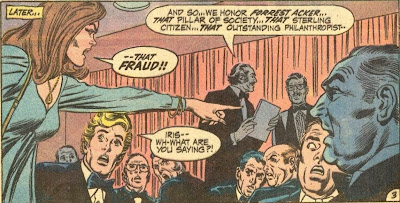 your heart's an empty hole.

Your brain is full of caffeine, 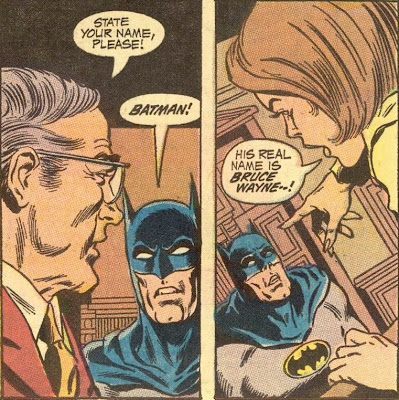 you have coffee in your soul.

Iris We-est! I wouldn't touch you with a 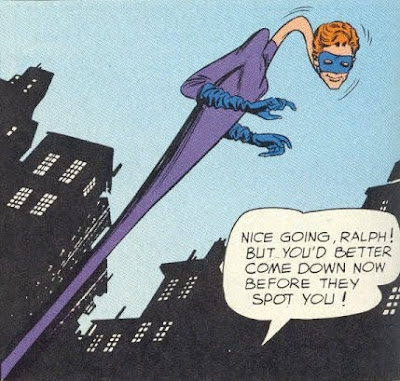 
You're a vile one, Iris West. 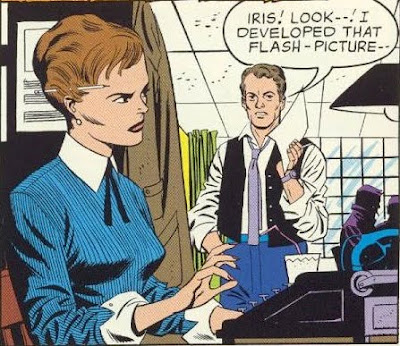 You have daggers in your eyes. 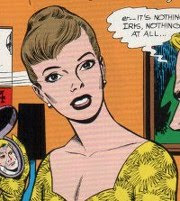 You have all the tender sweetness of Gorilla Grodd in disguise.

Iris We-est! Give the choice between the two of you, I'd take... 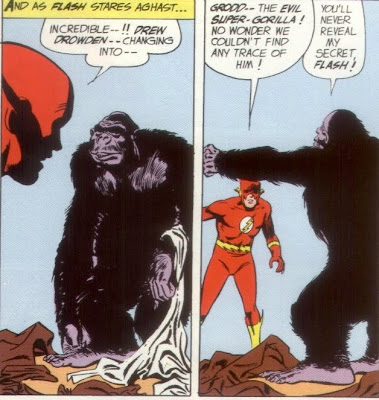 
You're a plot-bore, Iris West. 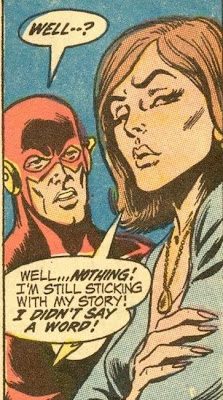 You're the queen of awful plots. 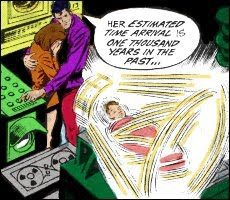 Your timeline's a McGuffin tied in Silver Age-y knots.

During this time, the couple discovered that Iris was born in the 30th Century (c 2945 AD), and had been sent back to the present shortly before "Earth-East" attacked "Earth-West," when Central City was a self-contained city. After years as a prominent presence in the Flash's life and Central City, she was killed by Professor Zoom during a costume party. Zoom vibrates his hand into her head, solidifying it just enough to kill her.[2][3] Enraged by his wife's death, Barry, as the Flash, killed Zoom by breaking his neck.

Iris did not stay dead for long. As Iris's biological parents, the Russells (with the help of a future Flash, John Fox), sent the then-infant Iris to the past, where she was adopted by Ira West, her "death" caused a paradox that was resolved after the Russells placed her consciousness into a new body. Barry was reunited with Iris in her time,[4] and were able to spend a month together. However, the couple knew if Barry returned to the past, he would die in the catalytic Crisis on Infinite Earths.[5] During their time together, they conceived the Tornado Twins, Don and Dawn. Don married the descendant of Professor Zoom, Meloni Thawne, hoping to end the feud between the two families. They had a son, Bart, whose powers manifested at an early age and caused him to age at an accelerated rate. Don and Dawn died saving 30th Century Earth from an invasion by the Dominators. Iris took Bart to the past to enlist the aid of her nephew (by then, Wally had taken the mantle of the Flash) in saving her grandson. After Bart's accelerated aging slowed down, he went by the name of Impulse. Not much is known about her after that, but Iris volunteered to take care of the Weather Wizard's orphaned son. Wally West later named his daughter Iris in honor of his aunt.


You irritate me, Iris West. 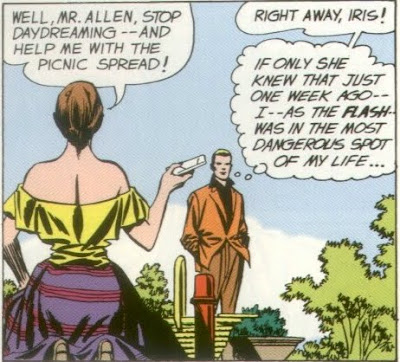 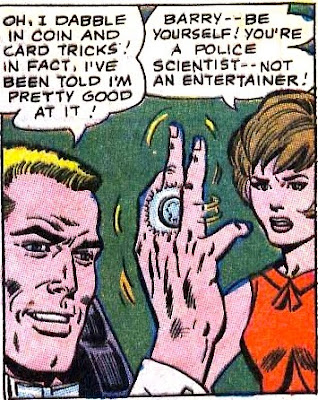 You're a red-haired vicious fishwife who treats Barry like a louse. 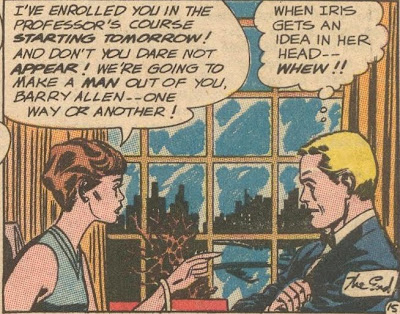 Iris We-est! Your role is an appalling parody overflowing with the most disgraceful assortment of sexist imaginings, with your hair in


You're a foul one, Iris West.

You're a torrid, horrid, skunk. 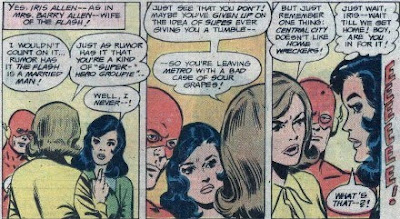 You're heart is made of solid rock, 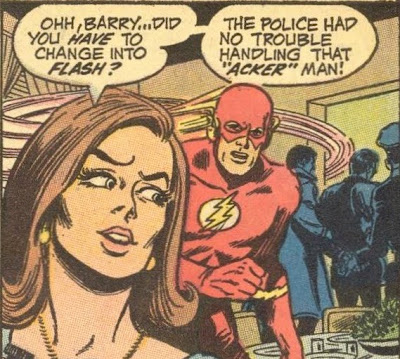 your role is full of bunk. 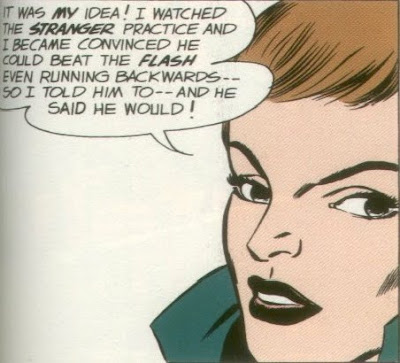 Iris We-est! The three words that best describe you are as follows, and I quote: 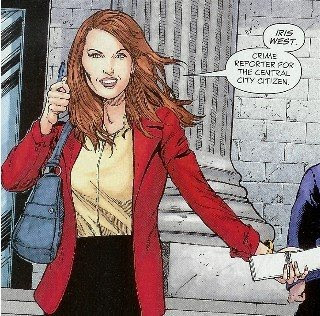 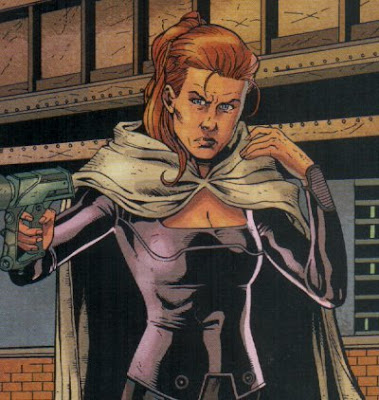