Jimmy Olsen is One in a Million!


The population of Metropolis is about six million people.

How do I know this? Jimmy Olsen, of course.


Reading the Superman Family Showcase (which, as everyone knows, is really the Jimmy Olsen Showcase but DC didn't have the guts to call it that) is opening my eyes. I am learning about new things. How to use 4th dimensional forceps. Sending morse code messages with chalk dust. How to unthaw a dinosaur. I can't wait to show off at my next high school reunion.

Anyway, the story "The Six Jimmy Olsens" taught me that six people named Jimmy Olsen live in Metropolis. Now, trust me, you do not have the strength to know anything more about the story than that. Even I, whose Silver Fu is strong, so very strong ... even I, after reading the story, am now sequestered in the same urban Buddhist monastery where Eel O'Brien recovered, where I will need a semester of silence and separation from society to regain my composure. But the Absorbascon must go on. 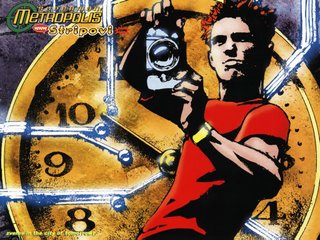 Let's assume Metropolis is not significantly different statistically from our own world. Okay, that's a pretty big assumption, given that Metropolis seems to have about 10 times as many reporters as it does police, and the reporters are the one who have to stop all the crime. On the other hand, I live in Washington, D.C., so that seems pretty normal to me.

Ergo, if there are six Jimmy Olsens in Metropolis, it's population should be about 6 million people. It also means that in Central City, there's a Jimmy Olsen on every block. 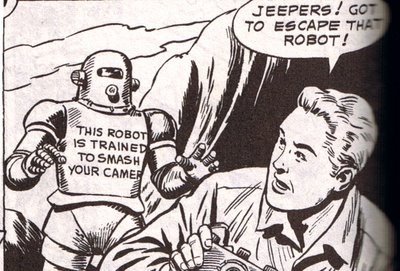 Is the concept of "Superboy" inherently ... flawed? 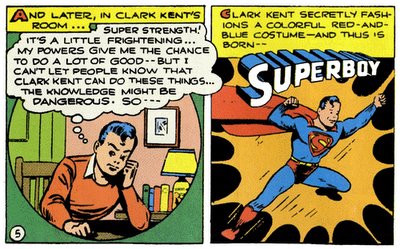 During his originaly Silver Age, the Boy of Steel pushed "suspension of disbelief" to unheard of places. Believing that the Superman can keep his identity secret in the heavily populated Metropolis is one thing; believing that Superboy can do that in Smallville, which had, tops, maybe 100 boys in his age range is beyond the pale.

Even if you overlook that, Superboy and Superman are not supposed to coexist at the same time. The post-Crisis Superboy was introduced when Superman was absent from the DCU; indeed, precisely because he was absent. After Superman returned, their relationship was rocky at best. Narratively, Superboy was just a YJer or a Titan, not really a member of the "Superman Family" (although great strides were made toward including him in recent years). Perhaps Superboy's doom became inevitable as soon as Superman returned?

Recent events in Infinite Crisis with both Superboy and Superboy Prime lend an air of inevitable failure to the concept of Superboy as an on-going character, and so does Judge Lew of the Ninth Circuit. Superboy has been seamlessly replaced by Supergirl over in the Legion comic, and I'm wondering whether the recent ruling means the same mght be happening to the forthcoming cartoon show.

Is this seeming curse on the Boy of Steel simply happenstance? Comic book irony? Or is the ver concept of Superboy inherently flawed, unstable, doomed to self-destruction? I mean, isn't it odd that in Infinite Crisis, Superboy is essentially killed by ... Superboy?

Or is this the on-going revenge of Billy Batson...?
Posted by Scipio at 10:17 AM 28 comments: Links to this post

And on Wednesday, God Created Joy

There was so much to enjoy in this week's comics, well, my heart grew three sizes this day.

Finally! A sensible explanation for how Mary Marvel got her name. Mr. Terrific in the background ready to take J’onn’s place when the time comes. The New Olympians. The New. Friggin’. Olympians. Just to prove, I guess, that the Animated Universe is still stranger than New Earth could ever hope to be.

(1) It's nice to know that certain people are still basically crazy as a loon; (2) No, I was not sorry to see the person killed who was killed; it's long overdue.

Then I discover the Back-Up Feature is Jason Bard!!! Jason Bard is back and better than ever, with a new storytelling purpose and his own back-up feature. Besides, there’s something wrong with you if you don’t love Batman breaking into an apartment in the middle of the night so he can say to a pistol-wielding butt-naked private dick, “I need your services.” Who says Batman has no sense of humor?

Wagner’s tone remains dead-on with this miniseries and I’m looking forward to his next Golden Age redux, “Batman versus the Mad Monk”. I just wish the story had had more Golden Age compression; I would have preferred it in four issues, not six.

I must say, I’d love to read some stories from Earth-154 and Earth-898; I’m betting you would, too. And Earth-0? It was just nice to see it. And ... I was right about what Alex was looking for all along; now THAT is comic book irony.

JH is the most refreshingly depressing comic series ever made. JH makes Supergirl look like an inspirational speaker. You can read all your indy comics about skinny kids breaking up with each other; Jonah Hex experiences more bleak tragedy in his average afternoon than those kids will know in a thousand lifetimes.
Posted by Scipio at 8:13 PM 25 comments: Links to this post

Meanwhile, at the Monkey... 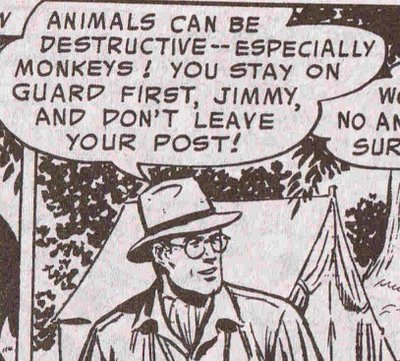 Sherin wants to talk to you about the sexuality/sexualness of female characters.

Rambo begins his on-going series on convincing your friends to try comic books.

The Big Blog discusses Lois Lane, and other characters who need their butts whooped.

Do you having any questions for Kurt Busiek? Let Manager Lad ask him for you!
Posted by Scipio at 5:56 PM Links to this post

"Quickly, Elevator Boy; to the shaft!"

I am trying ernestly to continue hating Jimmy Olsen, but, believe it or not, reading the Superman Family Showcase is making it increasingly difficult.

Nonplussed? Me, too. But how can you hate somebody ... like this: 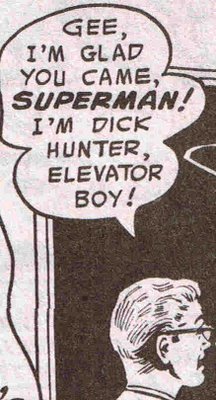 "Dick Hunter, Elevator Boy"
I am certain I rented that movie; the star kept inviting people to go up and down his shaft.

Face it, the more Jimmy Olsen stories you read, the more you realize that hating Jimmy Olsen is like kicking a sick puppy. It's just not fair.

This panel is from "Jimmy Olsen's Forgotten Adventure"; "Oh, Superman, I was so drunk last night!". Don't worry, Jimmy, I'm sure the jpegs will be all over the internet to help remind you.

Anyway, since this is Haikuesday... 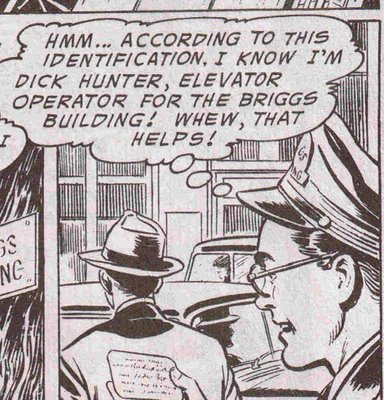 According to this
identification I
know I'm Dick Hunter.

Okay, Jimmy, okay, we get it; you're a "Dick Hunter", give it a rest.
Stop hitting us over the head with it like a brick... 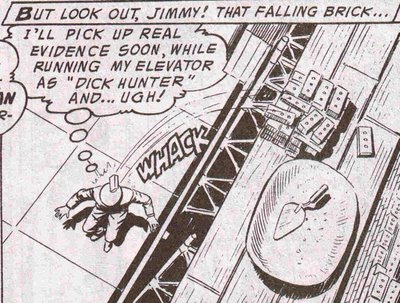 The universe sends a firm message to Jimmy about the lack of subtlety in his
"secret identities".
Posted by Scipio at 6:54 AM 17 comments: Links to this post 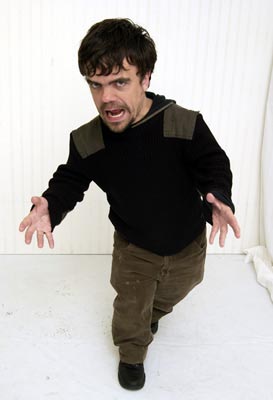 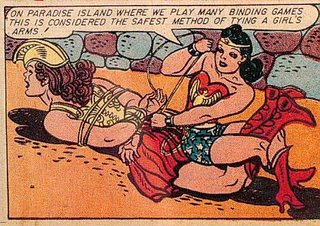 
Don't be shocked; he was a Harvard man.
Posted by Scipio at 1:32 PM 9 comments: Links to this post

Justice, Truth, and the American Way

"Truth, Justice, and the American Way" has long been Superman's motto, another inheritance from his ventures outside comics and

Like many superthings, this motto has to some degree been generalized to the DCU as a whole. In that context, the common view is that the pillars of the DCU, the "Big Three", the Superheroic Trinity, each hew most to one of the three principles. Wonder Woman represents "Truth", Batman "Justice", and Superman "the American Way".

But I don't see it that way at all.

I've read as many WW stories as most people have, and my impression is that they seldom involved any sort of "search for the truth" (except, perhaps, where the enemy is hiding). I'd be hard pressed, using evidence from her adventures, to depict her role as "Seeker of Truth". She is, at heart, your standard monster-bashing classical adventurer, not an Oedipus-the-detective or Oedipus-the-suffering-sage. 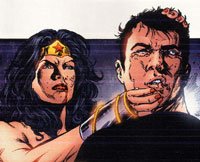 Wonder Woman, as her Countdown storyline showed, is about "Justice" and by that I mean, not the "show them the system works" justice of a Commissioner Gordon but the "I'll just tie you to this here anthill and walk away" justice of a Jonah Hex. Not due process; not trial by jury. Old-fashioned neck-snapping Justice.

To me, it's Superman who's about the Truth. Does that seem off, given that a huge chunk of super-storytime has focused on efforts to keep his civilian identity secret, even from his closest friends? Perhaps. But Superman's story (as Johns and Busiek are recently reminding us) is really Clark Kent's story. Clark Kent is Superman's "truth" he must protect. Clark Kent, the crusading reporter, whose job is to unearth truths and expose them for the world to see. Clark Kent's life is devoted to pursuing, and sharing, the truth. 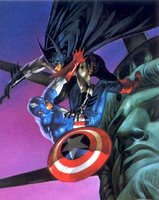 C'mon! A wealthy industrialist who embodies the American ethos of social Darwinism? Who still chooses to use his power for the benefit of society? Who, through his indomitable spirit, turns his own personal tragedy into a public good? Who believes in family, redemption, and public service?

Citizens, Batman is the American Way.
Posted by Scipio at 7:10 AM 20 comments: Links to this post