is vicious and emasculating. 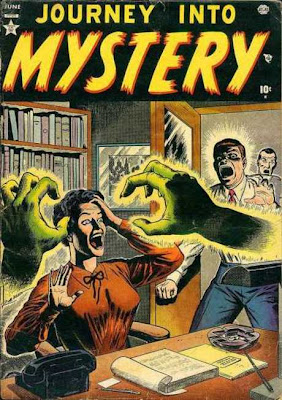 are reaching out to attack your brain, destroy your pleasure, and lay waste to your medium of serialized entertainment. 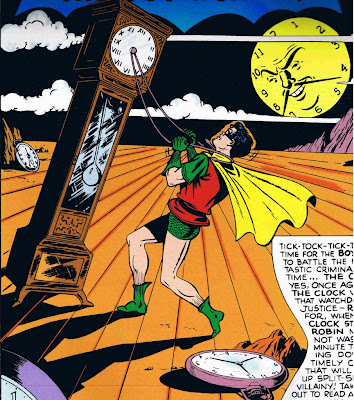 which is counted as one with its sneering semiotic sidekick,
Dadaism 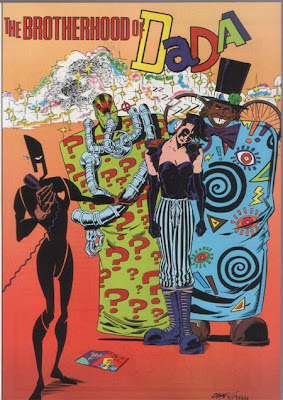 Okay, as much as I joke about it, I realize that surrealism & dadaism themselves are not intrinsic threats, or even prevalent in comics. But (in case you haven't guessed) when I talk about them, I'm really just speaking in code. I use "surrealism" and "dadaism" as surrogate terms to denote the tendencies in some comic book creators to ignore the need for perspective, context, and meaning. The emphasis on "cool moments", visually or dramatically, rather than on the entire product or effect of plot and art. Read anything by Loeb and Lee. 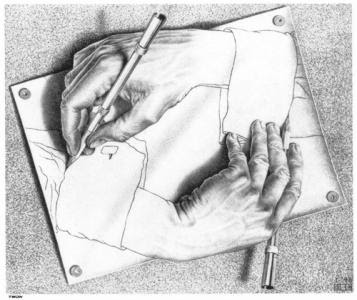 Continuity is one thing: there are certain things one might reasonably be expected to know about Batman or Superman before reading one of their stories, without requiring exposition on them in every story. But when knowledge of specific previous stories becomes a necessary key to making sense of a current story, then self-referentialism has taken hold. It's the comic book version of an auto-immune disease, in which a system designed to keep comics sensible and healthy turns against it and starts killing it from within. 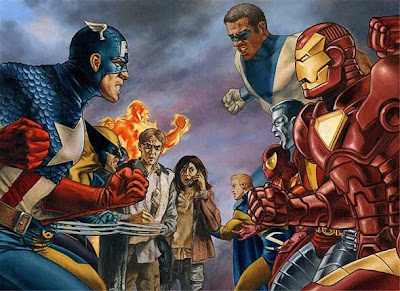 Defined here as confusing moral ambivalence with sophistication. Yes, it's a grey world rather than a black & white one; but that's makes it that much more important to take stands on right and wrong. Symptoms include heroes fighting heroes rather than villains,
and characters switching sides willy-nilly from hero to villain as the situation dictates.

Using anti-societal characters as protagonists or characters of primary reader identification pretty much limits your audience to adolescents, or those with their mindset. 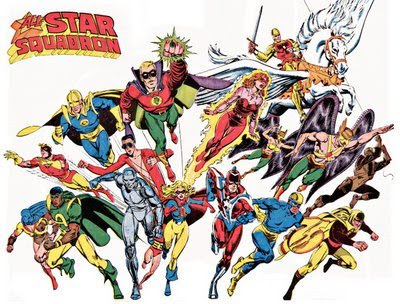 Nostalgia is fine, you know. In fact, since it's often steeped in offal that's been stewing for years, it can be fertile ground for germinating new stories, characters, and directions (as it is in the work of Geoff Johns or James Robinson, whether you like the particular directions they choose or not). Nostalgia can help a well-rooted literary future blossom, or it can become fetid and choke all storytelling like kudzu in a keyboard. When nostalgia keeps writers from adding to a myth or telling new stories it's become Nostalgic Paralysis. 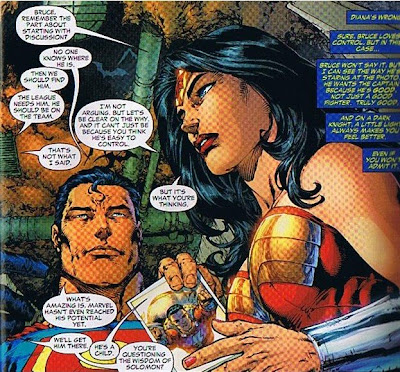 We often associate decompression with silent panels and dialog spread out to a "slow pace".
So a panel full of all that dialog and captioning hardly seems like decompression, I know.
However, four issues of it does.
When the "storyline" replaces "the story"
is it any wonder that "the trade" replaces "the monthly"? 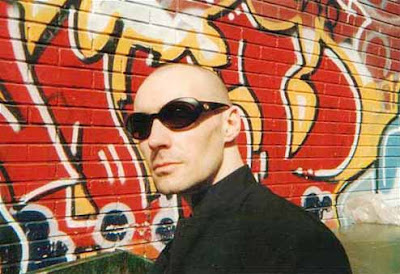 An any additional commentary on this would be...
meaningless and pointless.
Posted by Scipio at 6:34 AM 29 comments:

Pep 5: The Enchantment Under the Sea Dance 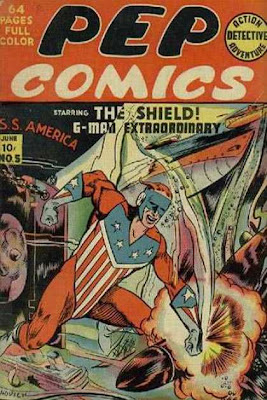 Okay, at first I tried to believe that the action on this cover is supposed to take place underwater. Because I see, um, ship-ish looking things. And air bubbles.

Oh, the heck with it! This can only be interpreted as a fractured surrealist landscape colored with a variegated miasma of pastels. It looks like someone put the Fabulous Furry Freak Brothers and R. Crumb in a blender with some art chalk, and then dipped an issue of Captain America in it.

The Shield has a rudder up his butt, bringing new meaning to "hard to port!", and is blowing off his right foot with a torpedo, surrounded by negative-space-infused textual elements, and ambiguous shapes that could be salmon or submarines, propellers or women's hats, streams or banana leaves, pontoons or hot dog buns.

These illusions disillusioned me; how could our hero, The Shield, participate in such a patent and aggressive display of wicked Surrealism, the Enemy of All That is Good in Comics? And then it hit me, like a torpedo exploding on my shinbone:

Phew! NOW I can sleep tonight!
Posted by Scipio at 7:43 AM 6 comments: