The Shape of Things To Come

I am beginning to believe that this

Fig. 1
is the structure of the current DC Multiverse.

Okay, sure; we all know that "52 universes" only developed from the working title of maxi-series, labelled thus because of how many weeks of issues it had. Pure happenstance....

OR
IS
IT?!?!?!?
Today I don my tin-foil hat (loaned to me by master conspiracy theorist Ben "Tin-Foil" Hatton) in an attempt to cobble together some sort of sensible reason that there should be 52 earths rather than any other number, and how New Earth can be the "first earth among equals".

What I've settled on is that the 52 universes represent the fourth degree of the decagonal figurate number series. I won't bore you with most of the mathematics (Blogger isn't designed for that kind of typing; besides, that's what Wikipedia is for). Suffice it to say that figurate numbers are those generated by the regular expansion of a polygon according to a standard geometric pattern/mathematical formula. One look at some examples, and you'll get it intuitively (see Fig. 2).

Fig. 2
The number 52 is generated by the extrapolation of a decagon (a ten-sided polygon). If you'll count the number of dots in Figure 1, you'll see there are 52 of them ...

ONE
FOR
EACH
EARTH!
Yes, this truth is definitely "out there". 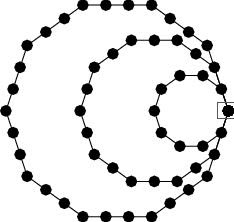 According to, well, me, the "initial point" at the rightmost part of Figure 1 represents "New Earth". On the one hand, it's a dot just like all the rest; on the other hand, it's the one dot that is found on each of the successive decagons. It represents the first degree of the decagonal figurate series; it is the first among equals. Q. E. D.!

The two dots adjacent to "New Earth" are, of course, "Earth 1" and "Earth 2". They are conceptually closest to New Earth. Together, those three earths are the basis for the "inner circle" of earths, which includes the most familiar ones.

Maybe it'll be easier if I just show it to you... 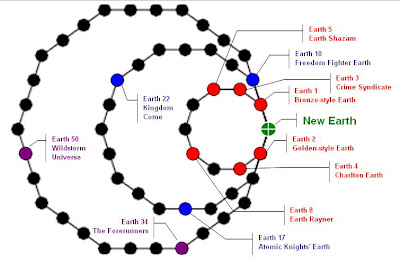 Fig. 3
Sorry, Marty, I didn't have time to make it exactly to scale, but you get the idea.

Why is the structure of the multiverse decagonal?

Well, my answer may be rather metatextual, but I'm personally going to pretend it's manifestation of the Ten Iconic Characters that constitute the mythic rock on which the DCU is based (Superman, Batman, Wonder Woman, Aquaman, Flash, Green Lantern, Martian Manhunter, Green Arrow, Black Canary, and Vibe).

And to the editors at DC: please feel free to utilize my diagram! Hey, I like to give back when I can...!
Posted by Scipio at 9:04 PM 50 comments: A collaboration between Jon Carey and me.

Attack of the Pod People!

The latest installment of the Big Monkey Comics Podcast is (finally) on line!

Not even Big Mike Pellegrino will be able shoot boxing gloves arrows fast enough to defend Green Arrow from the bashing that the Podpanelist give him! Listen to Ben stand his ground as it give out from underneath him!

Which one of the Podpanelists LOVES the Skrull reveal? See whether you can guess in advance, and hear who we think is a Skrull.

Then, at Ben "I Love Girl Comics!" Hatton's insistence, we discuss something call "inn - dee com -icks"; I wasn't paying attention because I was reading Action Philosophers at the time and cleaning my monocle...

Let me know what you think of the show! 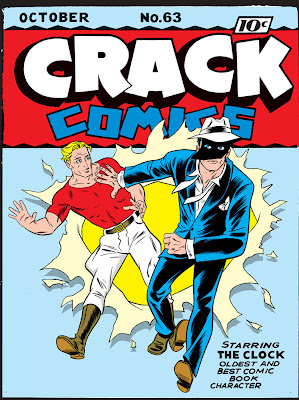 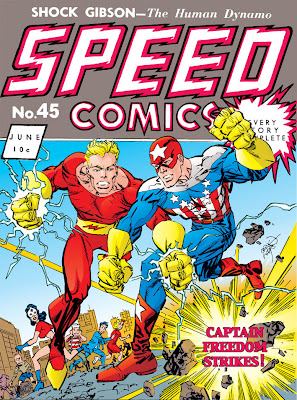 Will the Next Issue Project bring that kind of realization to a broader audience? Perhaps not directly. But it is my hope that when readers see how many stellar modern creators respect the Golden Age style enough to try their hand at it, they just may become interested in finding out why that is so.
Posted by Scipio at 7:51 AM 7 comments: