Not even the famed willpower of Alan Scott can resist... 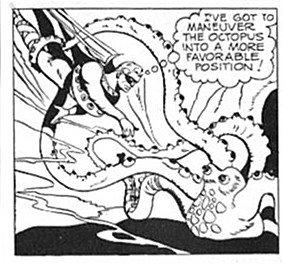 I found the genius I've long been missing ... and he wasn't on Oolong Island!

I refer, of course, to Genius Jones. 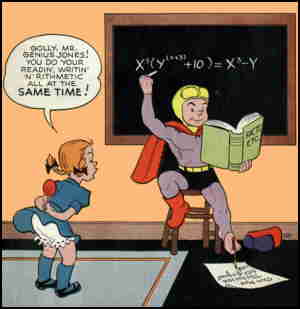 There have been a lot of "kid genius" characters, but nobody quite like Genius Jones; I mean, how many characters' origin center around bookburning?

Genius Jones (a.k.a. "The Answer Man") was a young boy who became shipwrecked on a deserted island. Fortunately, the boat he was on contained a vast reference library, and, salvaging 734 of the books, he committed them to memory before making them into a bonfire to signal for help.

Books, by the way, were a pre-internet medium for the storage and cataloging of information; can you imagine?

Rescued, he returned to NYC and he set up a lab in the back of an old car, where, instead of selling lemonade like other kids, he offered to answer any question for a dime. Dimes went farther in 1942, you know.

Genius's real first name was "John", and (as I've said here and elsewhere), I've always wanted it to be "revealed" that he had met and inspired a newly-arrived Martian Manhunter toward a career as an investigator. Don't hate me for it; I was raised during the Rozakis/Thomas era.

He dressed like a superhero, acted like a detective, and looked like a kid's funny cartoon. He crossed genres, but the world is not always kind to such characters, and today Genius Jones is nearly forgotten. In fact, I haven't heard tell of ANY in-story references to Genius Jones since his last appearance in DC comics in 1947.

Until this week, that is, when he turned up in, of all things, the Dr. Thirteen back-up story in Tales of the Unexpected. The main story, starring the Spectre was full of "Expected": evil people doing evil things to good people, victims being punished for punishing their victimizers, befitting deaths, severed limbs, gratuitously evil gangs threaten to rape little girls (an annoyingly common trope nowadays); you know, the usual.

This was definitely a Tale of the Unexpected, and one you shouldn't miss. Kudos to author Brian Azzarello (as complemented perfectly by the clean art of Cliff Chiang); if this is a sample of his writing, I may have to see whether he's written anything else interesting ... .
Posted by Scipio at 7:10 AM 12 comments:

At Devon's suggestion, I gave "The Batman" cartoon another try, because, after all, Devon erreth not. 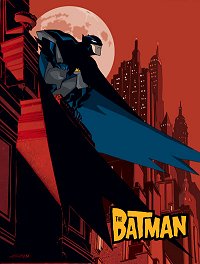 I'm glad I did! The show seems to have hit its stride. The manga (or is it japanime? Whatever...) influences seem to have been toned down. The addition of Robin is an enormous help (as I suppose it was in 1940); nice to see him as both The Kid Who Saves Batman's Butt and the Kid Who Batman Needs to Save While the Villain Gets Away.

The series seems to be leaning toward more tradition; in this most recent episode, down-and-out actor Basil Karlo was introduced as the new Clayface, which is as it should be. I also noticed the earsplitting opening "music" has been replace by an actual theme, one that subtly employs both the familiar bass lick and the "POW!" music stings from the 1960s show; well played.

All that's missing now is Two-Face, I think...

I also saw the Legion cartoon for the first time, and I liked it. Good characterization, good mix of people and powers, and young Superman's big ears are the cutest thing I've ever seen.

Initially, I wasn't keen on the idea of an android Brainaic 5. But then it occurred to me that when Brainaic 5 was introduced in the comics, it wasn't yet known that Brainaic was an android. An ersatz explanation (several in fact) was crafted as to how (and why) an android would have a humanoid descendent, but the entire thing always felt strained. Even for the Legion, where origins include space whales, electrified rhinos, and parents deceiving their children into thinking they're androids. Like it or not, it makes much more sense that B5 would be an android than that he wouldn't.

I was a little disoriented by the absence of Cosmic Boy; the cartoon Legion didn't seem to have a leader. Maybe they're better than the comic book version, and don't need a leader! Maybe it's time to face up to something: magnetic powers may have seemed like cool beans when the Legion was introduced, but they've become kind of passe. I mean, how much free-standing iron would you expect there to be in the 31st Century? Exactly none; everything will be plastic and polymers.

Speaking of the Legion... my current vote on the Supernova Mystery is that it's Mon-El. I've heard some interesting theories, including that it's Ray Palmer using his powers creatively (Ray's power comes from white dwarf star material ... the same thing supernovas are made of!). But in the most recent Action, Superman learns from the Auctioneer that there are three Kryptonians on earth, and I don't think he meant Krypto. Making the New Earth Mon-El a Kryptonian solves a host of problems created by concept of the planet Daxam; Mon-El would be a teenager with a smaller build, like Supernova has.

If so ... Mon-El was awfully rude to Booster Gold; why? It also means that One Year Later, Superman still doesn't know Supernova is a Kryptonian. That's seems unlikely, doesn't it?
Posted by Scipio at 7:20 PM 22 comments: 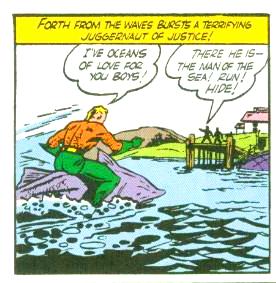 Catching Up With Arthur

The last time I was lucky enough to catch up with the King of the Seas was right before he was banished from his own book, but was looking forward to his new TV show. That didn't pan out, but as I've been hearing other rumors, and tracked him down again to see what I could find out...
"Sir, sir! Since the television show fell through, how've you been keeping yourself busy?" 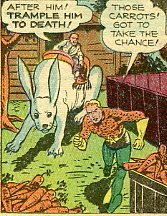 "Well, now that you have so much free time on your hands, have you had the chance to read Sword of Atlantis at all?" 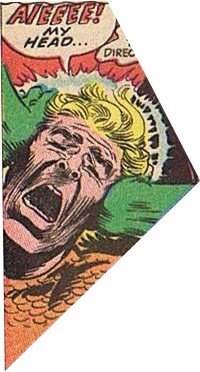 "Indeed. The plot aside, what do you think of this sword-wielding fellow, the New Aquaman?" 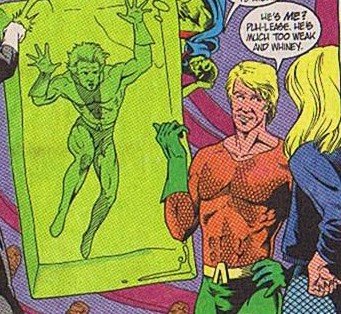 "I've heard that your absence from your own book, your appearances in Justice, and the buzz about you in other media has sparked readers' demand for your return. Have you yourself noticed?" 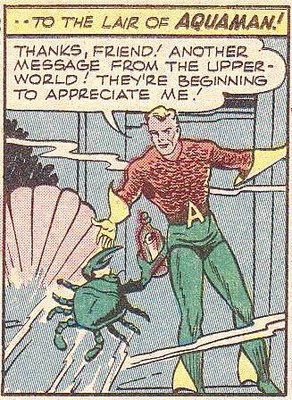 "It's been noted that despite having been killed and replaced, your old JLA buddies Ollie Queen and Hal Jordan have both come back..."

"Care to comment on the rumors that you're planning a comeback of some sort with your agent?" 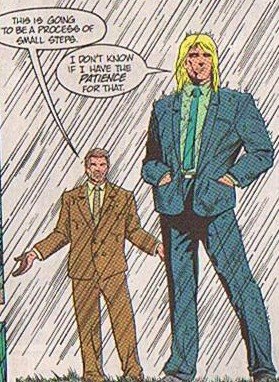 "Would you want Kurt Busiek, who's been doing such wonderful work on Superman, to continue writing the book if you return?" 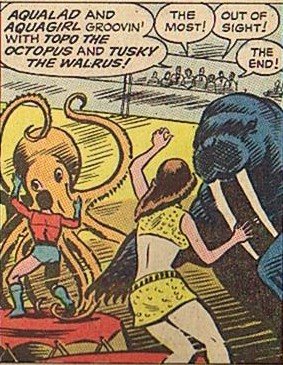