You'd think that "The Trinity", the DCU's three biggest stars, would be as exciting as Sims as they are as superheroes. Alas. 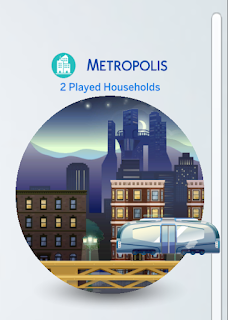 Clark is boring because he's perfect. He doesn't have superpowers, but the version I downloaded of him has most relevant skills maxed out, so there is nothing for him to learn.

He doesn't have any career ambitions because he's already as high as he needs to be in the (custom) journalism career; I have to expend effort to prevent him from being promoted to on on-air newsreader.

Not even the 'naughty mod' spices him up little because you can't let him really be 'naughty' with anyone except someone he's properly dating and whom he loves and respects because... he's Superman. And, Silver Age notwithstanding, that's pretty much one person at a time. Because as much as I love the idea of creating Lana Lang in Smallville (as I have renamed the Sims' rural world) and giving her beehives so that like a proper Insect Queen she can train the swarms to go attack Lois, the fact is, Lois lives in an apartment in the big city and bees don't take elevators.

Mostly Clark makes dinner for other people, spends his time on the street befriending people, making them feel better, mentoring them in skills (because he has all of them), and visiting Smallville and doing errands for the townsfolk. It makes him happy.  Once he builds up some money, maybe I'll buy him a weekend place there, so he can marry Lois and get her to raise some kids there, or at least just get her away from Barry.

More on that later.

Bruce is Brucing. He's comedically rich, so he needs no job.  Alfred does all the domestic work. That's a lie, of course, because they have a maid service, Alfred mostly cooks and looks after the Orphan Bruce adopted when I wasn't looking because of course he did.

That's also a lie, because they have a regular nanny service. Alfred mostly looks after Bruce. I should have Bruce spend time tom-catting around but you know his heart's not really in it, because that would be FUN.  I don't feel the need to have him 'propagate' when you know he just wants to adopt orphans. At some point I should send him some of Barry's excess kids.  But more on that later.

From a storytelling perspective, I AM interested for Bruce's sake in this custom career, because I am capable of fixing so that it's available not just for adults but for teens and children, too. Even orphans.

Wayne & Co. live in the neighborhood where it's always night-time because it's designed for vampires, although I got rid of all those because you certainly can't have a bunch of bat-people running around Gotham City. It's logistically hard to play Bruce because he lives in a big weird mansion and Sims tend to get lost in those.  Perhaps I'll have him get a dog named Ace, train him to attack, and then roam around the worlds looking for people who are being mean so he can sic the dog on them. That seems like something he'd enjoy. 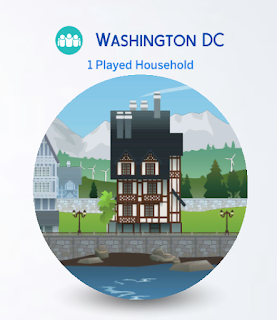 Diana lives with her twin brother, Jason, her pal Etta, and Etta's adopted son, whose name (Demetrius?) always escapes me because I didn't pick it, and Etta's dog, Caramel, which I remember because "Caramel Candy" is funny.

Diana works in the (custom) International Relations career, which uses the language barriers mod (one of my favorites!), so she spends a lot of time studying foreign languages and reading Classical literature (which fortunately I created for her). She's a career-gal, so rather than dating per se, she has FWBs, mostly Cisco Ramon's older brother, Dante, the concert pianist, because he's (1) straight; (2) vaguely Themysciran-looking; and (3) without any other narrative function in the game.

Oh and Lex, of all people, because, even though I created him as an evil rich scientific genius who lives in a penthouse in Metropolis, he's decided he'd rather paint and hang out in downtown coffee shops hawking his paintings and hitting on anyone pretty who shows interest in them, which is how they met.  Diana likes the sensitive artistic type.

As I said, the Sims far outnumber me and I can barely control one of them at a time.  Maybe I should have made Steve Trevor. Or Trevor Barnes. Or BOTH.  Then they could fight over Diana's affections.

But knowing the Sims, who are notoriously omnisexual, they'd probably wind up falling for each other when I was in some other world and I'd come back to find them living in a household named "Trevor Trevor" and Diana attending their wedding in Tartosa and hooking up with one (or more) of the Ramon Brothers at the reception (like that time at the bowling alley disco that I refuse to talk about). And the less said about the thing with her and Barry the better.

Etta, at least, has some verve; she's a college gal, getting her culinary degree, meaning she visits bizarre recipes upon the household regularly and grows vegetables out back.

I was going to set her up with an active lesbian love life and make her the leader of a sorority (since the Sims can create those), but she went and nonsensically adopted a child before I could get that going and it's all a bit too much for me to juggle.

Jason has no job; he's a stay-at-home brother.  He's Greek, so he just makes pottery, works out, plays the lyre, plays chess or spars with Diana when she asks, and has sex with townies of any gender or life-state whenever they ask. I should probably just download the custom olive trees for him to complete the picture.

these guys are the boring ones.

To be fair, I'd much rather watch a show about this Clark Kent than what I saw of the current show before I dropped it. And there are far less interesting Wonder Woman stories...

Karb-Brak... I actually had the first issue he appeared and the one where he sends Clark back to 1776... Bronze-Age Stuporman. Still brings back good memories though.

No, no, no. Diana would play chess with Clark. Using giant marble chessmen. "Hola, this is how we do it on Paradise Island!"

With due respect, Redforce, I STRONGLY disagree. Diana would use scantily-clad female warriors DRESSED in confining chess piece that restrict their movement, because THAT is definitely how they do it on Paradise Island.