At first Ray's life was simple. So simple he was my most boring Sim.

Then I found a way to change that. 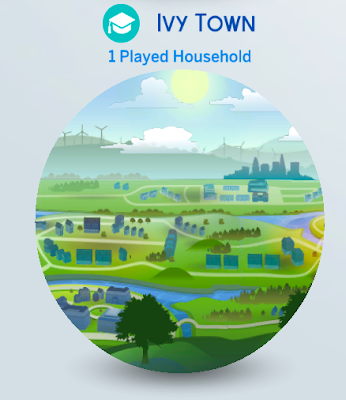 At first, he and Ryan Choi lived together in "Ivy Town" (my relabelled version of Britechester, the Sims' college town) in a Tiny House.  For years, the Sims was geared toward big expansive suburban-style houses; literally, the large a room was, the more a Sim would like it.  But their Tiny Living pack added this new house type which gave you BIG bonuses for building SMALL houses, and naturally this seemed like a good fit for The Atoms. It certainly upped their skills fast, but other than that... it was boring and they were tools.  Because ... well, Ray and Ryan ARE tools.  So when it came time for the Sim-reboot I had a few ideas about how to enliven their new lives.

First of all, no more Tiny House. Same small lot, but now it has as many levels as a house is allowed.  The aboveground structure is split into two adjacent buildings and Ray only occupies one. So instead of having other householders I need to control, the two extra bedrooms hold renters--Sims I do not have to control (and can't). It keeps things lively but reduces the burden on me as a player.  One of them is Physics student Ryan Choi; the other is Caitlin Snow, who's in med school, and is SUCH a delightful and perfectly good girl. Except when Barry's around.

As you may notice from the picture, the Adjacent House is now occupied by ... The Hawks.  Yes, Carter and Shayera Hall, fun-loving, hard-living, hard-loving Hawkman and Hawkwoman! Breakers of beds, precious artifacts, and criminal craniums.  Having Carter and Ray share the same lot works like a dream; each will do his own thing if the other requires attention, each provides interesting opportunities for gameplay, and they can do joint activities. And, of course, EVERYTHING is better with Shayera around.

Barry and Hal may have been DC's original Odd Couple heroes and Blue Beetle and Booster Gold, its most famous, but Ray and Carter were the best combination of believable and likable.  That's how they work in the game, too. Ray is a neat freak scientist (if you spend as much time being the size of a dustball as Ray does, you'd be a neat freak, too) into streamlined modern decor and Carter is an earthy archaeologist in love with the past, but both are serious yet adventurous academics. They actually make sense as friends.

Just like Ray, the Halls have common space on the ground floor, their bedroom (and no breakables) on the second floor) and two rooms on the third floor, one for their boy and one for a renter. But it's the levels UNDERNEATH the house that give it the special "Atom" touch...

There are four full floors under ground, none of which have access by stairs, ladder, elevator, or hole. They are completely inaccessible, in fact.  Unless you're The Atom.

You see, there's an obscure power in the game: teleportation, which Sims can do it if they have really high levels of Meditation Skill.  So I used a cheat to give Ray the power and now he can *pop* fade away and reappear on another level of the house that no one else can access.   Which I pretend is him SHRINKING to one of the sub-sized worlds he's always disappearing to. 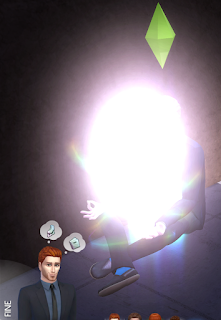 where his gym equipment is and his electron-microscope. And THREE levels below that one that are currently empty.  I don't know what to put there yet, but I'm thinking I can finally use Ray as a Sim who is Collector, because he has plenty of room to store crap where no one else can see it. OR, perhaps better, he AND Carter become Collectors and Ray stores Carter's crap subatomically, because that is very much something they would do.

All that is PUH-LENTY to keep them busy and interesting! To say nothing of the TWINS Ray is having with an arranged mother (Felicity Smoak, of course), because, as we know, settling down with a wife didn't work out well for Ray.

Oh! Which reminds me, there is one other element I added to spice up Ray's home life. I forgot to mention who's renting the Hall's spare bedroom.

It's kind of amazing that, even after an almost uncountable number of reboots, no writer has said "maybe Shayera should take the lead." A lot of writers have made her more interesting (and made Katar so mindless as to seem useless), but she's still the second-banana unless she's in a holding pattern (in a group context) waiting for Katar to show up.

And I'm sure Jean will be fine. I mean, she forged alliances with otherworldly civilizations, got out of an unhealthy marriage, and saved the world from another attempted Elongated Man series. ...Too soon?

It's never too soon to disrespect Ralph Dibney.