Poor J'onn. Never quite the center of even his own story.

J'onn works really well as a Sim, because there are alien Sims, they can look a lot like he's supposed to, and they can disguise themselves as human just as he does.

There's a perfect "Apex City" style neighborhood for him: Strangerville, so called because it's weird, lots of aliens live there, and it's home to a mystery storyline about an extraterrestrial spore invasion that infests and controls the populace.  All it's missing is the giant robot bears.

It was perfect for him! What could possibly go wrong? Well, I should have gotten the hint when, on his first weekend, he goes to visit Arthur, who was making dinner, and, as soon as he walks in the kitchen, the stove catches fire because it saw him coming.  Then, after he recovered from that panic (because, if you think Martians are afraid of fire, you should see how Sims react), he returned home to use the restroom where the toilet BURST INTO FLAMES AND SET HIM ON FIRE.  Welcome to Apex City.

After that vibrant start, I settled J'onn into a trailer with his dog, Jupiter, who became a star on Simstagram, because JJ was always posting cute pics of him.

J'onn, however, remained nearly friendless because all he did was go to his job as a private detective and spend every spare moment tracking down 'the mystery of Strangerville' so he could prepare to defeat the big bad Mother Plant and become the Hero of Strangerville.

The pics of the big fight are redacted because the mystery is supposed to remain that way, but suffice it to say the only other person to survive the fight was Hal Jordan, because of course it was.

Nothing.  He forewent all personal and professional development for the sake of being the hero and solving the mystery.  Being the Hero of Strangerville means J'onn gets an occasion stale cupcake mailed to him by fans and gets free conspiracy books at the Curio Shop near the trailer park.  In the end, all he has to show for it is Level 10 Cooking Skill from eating alone every night, some surveillance recordings of Hal Jordan, and a great many cute pics of Jupiter.

I'd tried to jump-start his post-mystery life by forming a club of around him of other aliens who liked to go to the movies and use their alien powers. How perfect is that?! I even made him a space-themed movie theater, tagged it as an alien hangout, and made it the club hub.

He even found himself a like-minded alien boyfriend whose human disguise was also an African-American. What could possibly go wrong? Well, leave it to J'onn, the Charlie Brown of the Justice League Gang, to figure out a way.

I popped in once only to discover he forgotten his boyfriend. Not overlooked or ghosted. Forgotten. As if they had never met. They had to be reintroduced. I figured it was some glitch, these things happen, it's a very complex game. So he started another relationship, with a female alien.  And it happened again.  I wondered: was there something wrong with J'onn's mind?!

Next time, I stuck with him to watch his every move and learned the truth. Turns out, J'onn was being repeatedly betrayed by his paramours. One of their alien powers is mindwiping.  After a while with J'onn they would simply decide, I suppose, that they were tired of him and... WIPED all knowledge of their relationships from his mind.  Ouch.  Poor J'onn.

Anyway, when my multiverse had a reboot--er, I mean, I started a new game--for all my DC characters, in order to broaden J'onn's life, I added Miss Martian to his household and moved them out of the trailer park to a nice regular house.

From which they prompted disappeared.

I discovered this only by accident when I went looking for Bruce Wayne, of all people.  Unbeknownst to me, he had moved into their house immediately after they left; the clue was Jupiter's dog dish, which was still full of unspoiled dog-food.

I suppose Bruce was eager to solve the town's new mystery, because detectives gotta detective.  Working with Bruce, I found that J'onn and M'gann, tired of living in a desert town full of hicks, grunts, and weirdos who send them stale cupcakes, had used some of their recently increased autonomy to move to... 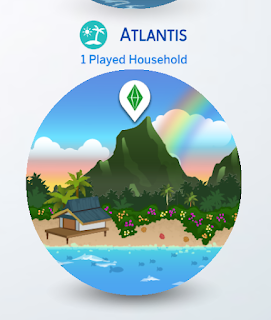 We'll look for them there tomorrow.

I mean...if you prioritize not getting lit on fire, the real estate prices in Atlantis probably look a lot more reasonable.

Pretty sure "proximity to water" was his #1 search priority.