It's the 10th Anniversary of the superhero-themed Heroclix game this year, and their producer, Wizkids, is pulling out all the stops to produce a bumper crop of new DCU figures.

What with the additional "Fast Forces" versions of some of these sets, we're looking at around 150 new DCU figures for the Heroclix gameboard. Now, of course, 9 or 10 of those will be Batman, but, hey, it's good to have bat-options, you know?

There's never been a better time to try out the game, if any of my posts about it have ever interested you.  Here's some of what's coming (info stolen from THE source for such things, HCRealms.com):


All these figures are designed to look like the versions in the current Batman film trilogy. For most of them (Batman, the Joker, Two-Face, Gordon) that's okay, because they look a lot like the comic book version anyway.  I will, however, be prying the sculpt of mush-mouthed cockney hacktor Michael Caine off the Alfred dial and putting one of the decent comic-book Alfred sculpts on it instead.  Because the movies aren't spilling over with lots of costumed types, the set should have many cool "civilian" support pieces.  Players are already jazzed about the innovative dials for Alfred, Lucius Fox, Gordn, and the GCPD Riot Officer.  Having these figures will make it much easier to play larger scale games where Batman is the heavyweight.

I expect Vibe in this set because, I mean, who else could Gordon-Levitt really be playing...?

This set should be crackerjack, with versions of all the New52 Justice League.  Having them all issued in the same set should allow you to compose a much more balance Justice League team (rather than having to use versions of those characters drawn from several different sets). I anticipate a kick-ass Aquaman.
I expect Vibe in this set, because--hello, Justice League?!


Like the previous "Superman" set, this set will be themed around Batman but will have other non-Gotham characters, too.  This is the only "full-sized" DC set this year, so it'll be fun to watch the many figures be previewed one by one and it will be the many opportunity to get some new villain pieces for the gameboard..  With the Batmobile, this set will introduce the "Vehicle" as a game mechanic, a prospects whose possibilities excites many players. Maybe they will finally make Killer Moth now that they can make a Mothmobile for him to motor around in?

I expect Vibe in this set, probably one of the later simplified versions of his costume (kind of like his JLU costume), because nothing would provide better ballast for the grim and gritty Gothamites than poppin'&lockin' Paco Ramone.

The neat thing about this set is: each character will have a "Classic" figure and a "Modern" figure.  For example, Classic Catwoman will be wearing her purple dress with the green cape outfit.as she did through most of the Gold and Silver Ages and Modern Catwoman will be in her black cat-burglar suit.  PLUS, the "field promotion" mechanic will apply, so there will times in the game when you can "update" the Classic version of character by replacing them with the Modern version.  So you can actually have prison-suit Luthor "invent" his battlesuit and start using it right in the middle of your game.  Since only a handful of truly classic characters of substantial long-lasting impact on the DCU with high public recognition and appreciation will be in this set, I expect Vibe to be in this set (Classic with yellow harem pents, Modern with his New52 look).

Yesterday I read Dial H #1, and I loved it; I encourage you to read it, too.

Author Chia Mieville (although he is an accomplished sci fi/fantasy writer and a ridiculous hunky man-babe) has said in the press that he's been very nervous about Dial H. 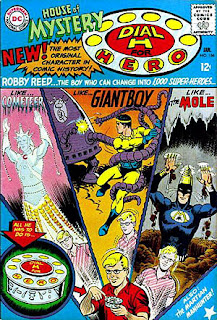 Small wonder.  Even with Mievelle's resume (and biceps), the prospect of revamping DC's "Dial H" property is a daunting one.  As many of you will already know, Dial H was a kid-friendly concept introduced in DC's Silver Age (specifically in House of Mystery #156, 1966).  As the accompanying cover suggests, it wasn't exactly grim and gritty.

The "H Dial" was a rotary dial (much like a telephone dial) of unknown origins, found in a cave by a boy, Robby Reed of Littleville, Colorado.  Every time Robby dialed "H-E-R-O" on the H dial, he would become a different superhero temporarily. After transforming, he would conveniently know exactly what his name and powers were.

One of the hooks of the stories was that readers could write in and suggest one-shot superheroes for the H dial.  This sort of interactivity was pioneered in the Silver Age; other examples included Legion elections and the dress designs of Katy Keene.  It was all done by postal mail (which, for you younger readers, was kind of like the internet only slower...and on paper). 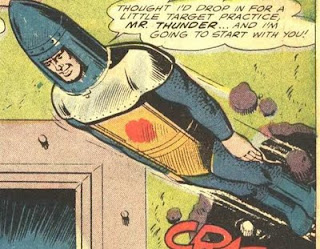 Anyway, the kid was a dork ("Sockamagee!"), the heroes were goofy (King Kandy!), and the setting inconsequential (Littleville, Colorado!).  It ran for only two years (though the concept has been revisited a few times by DC).

Silly or not, it was strong enough to knock the Martian Manhunter off the cover of House of Mystery (already a place of exile for him since his expulsion from Detective).  Poor J'onn, who never met a superpower he didn't want--he must have been greener with envy as the kid's ability to acquire new powers every day.

Stupid or not, the H Dial was all about the CONCEPT, which was as pure a childhood wish-fulfillment as you can get: "Here, kid; is a magic object; use it to become an experienced superhero whenever you want."  The "experienced" part --the fact that Robby knew his codename and powers and how to use them with each transformation-- is not a minor one.  Like Captain Marvel, the H Dial identities came not just with power but with the knowledge and wisdom to use that power; every kid's fantasy of what being an adult is like. 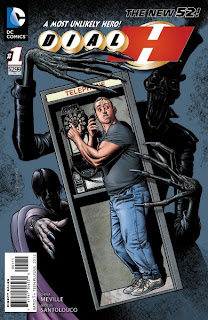 Mieville's done an amazing job of recontextualizing the concept and WITHOUT really altering it at all.
The setting is, again, Littleville, but the town represents things that have "seen better days".  Like the protagonist (Nelson Jent); like the H Dial itself (a relic of a different era).

I was ... relieved? Amazed?  Impressed?... when I saw the first two "heroes" produced by the H Dial, who are pretty much exactly as ridiculous as the original ones.... BUT TERRIFYING IN THEIR POWER.  In tone, then, this new comic has less in common with the original than it does, say, Peter Milligan's Enigma or even Grant Morrison's Doom Patrol.

I don't want to spoil the comic any more than that, and although I haven't read anyone else review the comic, I have a feeling a lot of people are going to be telling you to read it.  Please do, and let me know what you think.

Meanwhile, one last diversion: my theory about what the H Dial is.

Now, one of the glories of the H Dial is that it is sort of the technological equivalent of the Phantom Stranger. It has no background.  It has no context or explanation.  There is no sensible reason it could, should, or would do what it does in the way that it does. It is arbirtary, capricious, unjustified; and is totally, clearly, and purely an instrument for advancing the story. 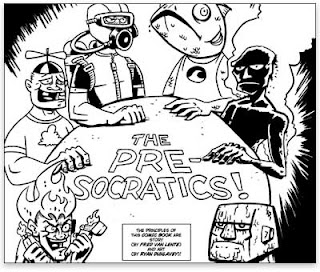 Cool.  I will now try to explain it ANYWAY with no evidence and nothing but RAW DEDUCTIVE POWER.  It'll be just like a pre-Socractic philosopher trying to explain cosmology and physics without ever having to do any, you know. science.

I propose that the H Dial is Fifth Dimensional (you know; like Mr Mxyzptlk) in origin; this is the only 'in-universe' way it could do what it does.  This is consistent with the fact that although "magical" and unpredictable in its fantastical power, it is still rule-based (e.g., you must dial HERO; you do not become the same thing twice; you automatically received a name with your transformation) and time-limited (the change is not permanent).

I posit that the H Dial is, in fact, a conceptual lint trap / gumball machine.  From an outside perspective (like ours, or the view from the Fifth Dimension), the DCU is a world powered by concepts for (super)heroes.  There are lots of such concepts; not all of them would work well in the long-run or jibe well with the existing DCU.  The DCU naturally "ejects" those concepts away from itself; the direction of that "away" is into the Fifth Dimension.  Rather than have half-baked conceptual garbage from the DCU littering up the Fifth Dimension, the H Dial serves as a lint trap, that collects and stores them all. 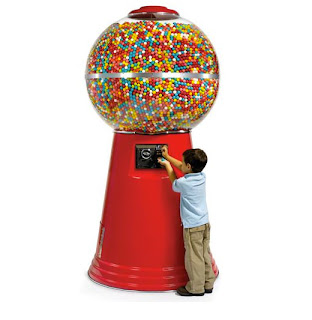 When you activate the H Dial (which like Mxyzpltk operates by "word-magic") by dialing HERO, it basically spits one of those concepts out to you like gumball machine.  You automatically 'consume' the concept by carrying it out and using its powers.  But the concept, having been fully expressed once, has served its purpose and vanishes.  Now that it has existed at least once in the past, it no longer needs to exist again, and the gumball is empty of it, never to appear again.

This is also consistent with the fact that the H Dial identities are invariable, um.... well, odd if not downright goofy. 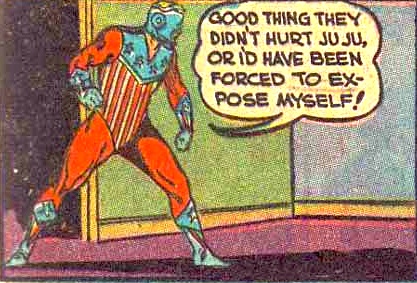 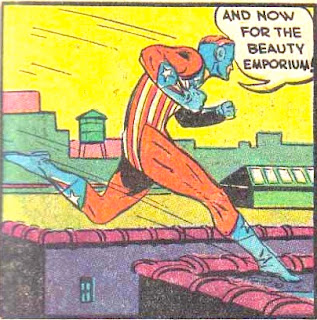 Sometimes you make it TOO easy.
Posted by Scipio at 6:45 PM 5 comments: