Here is the final poster in the series, "Fictionopolis Skylines #3", which includes Wonder Woman's Washington DC and Aquaman's Amnesty Bay. 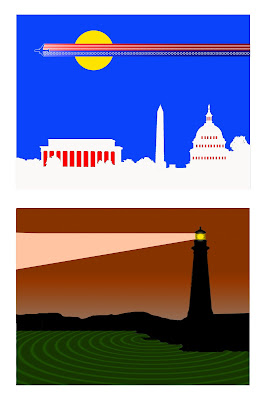 I had to think a while before figuring out how to represent the invisible plane and aquatelepathy. The Bat-Signal is a lot easier, conceptually.

So now the entire series, once printed out and hung on my wall should look something like this (depending on how I arrange them; what do you think?): 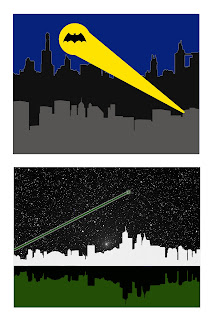 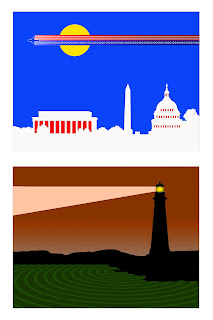 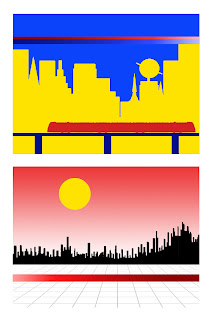 The second in a series. This is, as I hope you will recognize, Metropolis and Central City. 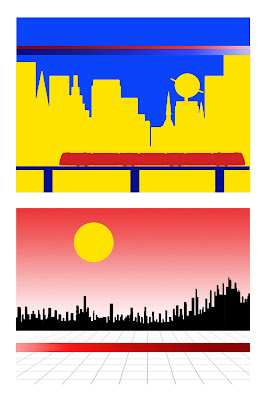 If anyone thinks, by the way, that I am exaggerating the Central City skyline: you're wrong. That skyline is directly copied from a Carmine Infantino-drawn Flash story.

You'll notice that I am using similar styles, colors, and effects across the series to help them tie in together. I think this will improved the effect when the entire triptych is hung.

You may remember that a while a go, I made some "travel posters" for famous DC cities. I enjoyed those, but lately I've wanted to revisit the idea, amp it up a bit, and use it as the basis for some art for my home. I have some BIG EMPTY walls crying out for some oomphy art.

This is the first in that series: "DC Fictionopolis Skylines #1". 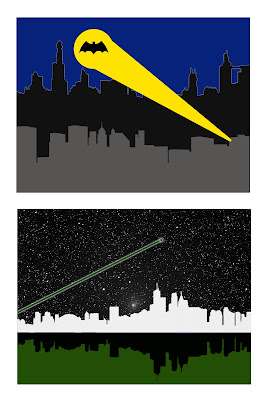 It's not two sideways posters; it's one 2'x3' poster with two panels. The resolution here on the blog may not be ideal, but they are designed at print size, so I know that the images will be crisp when I have them actually made.

As I'm hoping I don't need to tell you, it depicts Gotham City and Coast City. There will be two more in the series. I'm either going to print them as posters at PosterBrain or just go straight to print-on-canvas.
Posted by Scipio at 8:22 PM 6 comments:

Flash is the only DC Superhero


The Flash is DC’s only superhero.

Okay, perhaps that’s a bit of an overstatement. There are scores of lesser DC superheroes, of course. But he is the only iconic superhero, the only superhero at his level (except, you know… VIBE, who is beyond rules and categorization and levels and possibly space-time). 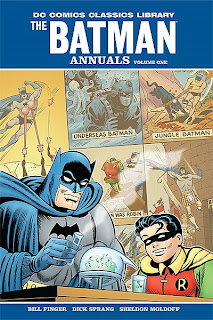 Batman is a detective in a detective genre. It’s not the most startling observation, is it? After all… Detective #27 (and all subsequent issues), you know. Yes, he’s fought the Rainbow Beast, and saved the world from the vampirous Mad Monk, and traveled through time. But those aren’t at the center of the character; he won’t be doing any of those in a Batman movie. Look, Sherlock Holmes fights snakes but that doesn’t make him a herpetologist (although the idea of shrieking queen Jeff Corwin playing a nervous-nellie Sherlock Holmes with the imperturbably handsome Josh Bernstein as his steadfast Watson amuses me terribly). Batman fights muggers and gangsters and crooks who are trying to avoid him. He does film noir voice-overs of his own internal monologue while his adventures are happening. And, as much 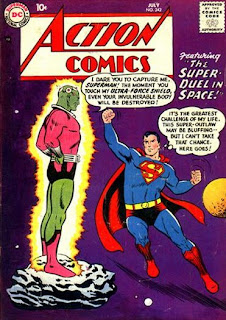 as I adore them all, Batman’s foes are villains, rather than “super-villains”. To the degree to which they have special “powers” (such as Poison Ivy, Mr Freeze, Killer Croc, and certainly Clayface) they distance themselves from the heart of Batman’s rogues gallery.

Superman is a science fiction character. Is there any doubt or debate about this? He’s an extraterrestrial rocketed to Earth, most of his non-sucky villains are either space aliens or mad scientists, and he’s got a miniature city in a bottle. Multi-colored kryptonite, giant gorillas, extra-dimensional pests, time-travel, exploding planets, the Legion of Frickin’ Super-Heroes; really, what more proof do you need? 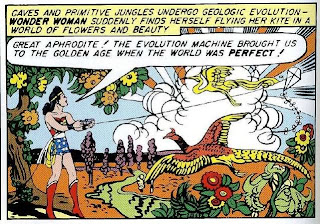 Wonder Woman is a fantasy character. By that I do not mean that she is the subject of gyno-amorous readers’ fantasies. I mean, just because she’s dressed like a majorette and wears fetters of submission and ties people up with rope and comes from an all-female society and was created by a well-known professional pervert doesn’t mean she’s a sexual fantasy, for Hades’ sake! But she’s definitely a fantasy character, occupying a fantasy world. She’s a scantily clad warrior-woman who comes from the Amazons of Greek myth. She has a magic lasso. From her very beginning, she was fighting Greek godlings, Queen Atomia of a subatomic world, and dwarf who conjured up slave-phantasms out of ectoplasm. And now that she’s a demi-god, she’s even more squarely in the otherworldly realm of fantasy. 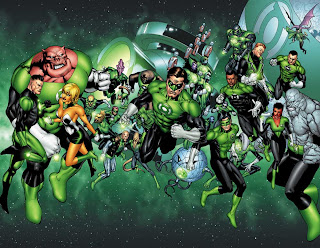 Green Lantern is a space opera character. Oh, sure, he’s got some supervillains who’ve been thrown at him over the years but, really… Sonar and Goldface? Tee-hee! When your best earthbound villains are a shark and a quadriplegic you’re not a superhero, you’re either Roy Schneider or Peter Higgs. Face it, without the space opera, Hal’s mostly distinguished by his Ability to Withstand Great Blows to the Head. Even before Hal really started hanging out with “the Corps”, the space opera was built in the character at creation, as he got his ring for a dying alien corpsmember. Ever since Hal started meeting other (non-dying) Green Lanterns, his story has been all about underage space hotties, and incompetent immortal guardians, and unpronounceable planets populated by improbably-shaped beings whose entire societies exist only so that we can say, “hey, that’s Kay-Fangz, the Green Lantern who looks like a staple remover”. There are rival conceptual factions in the “spectrum corps”, far-flung protectorate covering multiple star-systems, and soap operatic relationship among the members of the GL Corps. 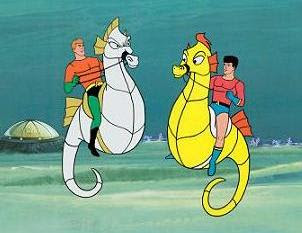 Aquaman, as I have previously elaborated on, is a Western character in a frontier setting, and apparently Geoff Johns agrees.

Martian Manhunter—well, H’ronmeer alone knows what Martian Manhunter is. He’s a detective, he’s a space alien, he’s a superhero, he’s a geisha, he’s a man, he’s a little girl. But whatever he is, DC has apparently decided he’s no longer iconic. Not only have they not included him in the newly rebooted Justice League, they’ve retroactivity removed him from it (adding insult to injury). At least when that was done to Wonder 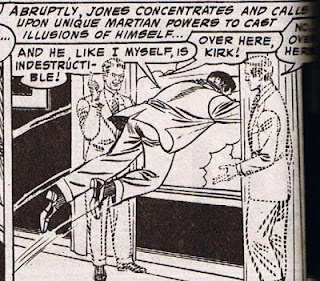 Woman it was “for her own good”; it was to preserve the idea that she had just arrived in “Patriarch’s World”. But in J’onn’s case it was simply so they could lock him away like a crazy aunt in their attic (i.e., Stormwatch). Regardless how many genres J’onn has accrued to himself, hoarding them like he does bizarre superpowers, it doesn’t matter: DC has, in effect stripped J’onn of whatever pretensions to iconic status he ever had, wasting the years of decades of interest the character acquired from his post-Crisis role in the Justice League in various media versions. 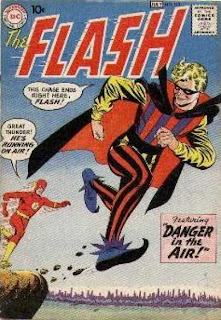 The Flash is an actual superhero. An otherwise regular guy who gains superpowers and fight crime with them. He fights villains who are mostly normal people with superpowers or the technological equivalent thereof. It’s cops and robbers but on the superheroic level. Francis Manapul is working Barry’s status as DC’s only iconic superhero for all its worth, building up the identity of his contextualizing city, fleshing out his supporting cast, refreshing and expanding his rogues gallery. Sure, he has lots of sci-fi elements, but they aren’t the core of his world; they are just the added elements that take him and his world from the mundane to the “super”. Manapul is helping keep the bizarre sci-fi in Flash grounded by linking it with real-world consequences (like Barry’s overuse of the speed force, and the actual ramifications of an enormous EMP pulse in an American metropolis).

Flash-fans, be proud; YOU are the only real DC superhero fans.