There is NOTHING sexual about this Comet panel. 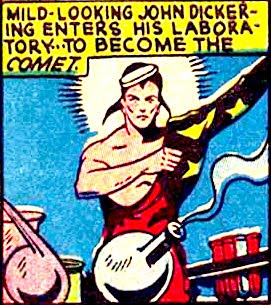 Posted by Scipio at 5:53 AM 9 comments: Links to this post

Email ThisBlogThis!Share to TwitterShare to FacebookShare to Pinterest
Labels: comet


One of many reasons to hate the Odious Hangman:

He causes the death of adorable seals. 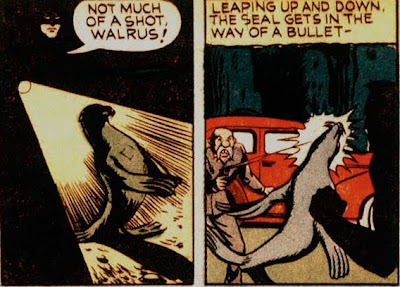 By using them as meat shields.

Posted by Scipio at 1:15 PM 4 comments: Links to this post

Email ThisBlogThis!Share to TwitterShare to FacebookShare to Pinterest
Labels: Hangman

The Shield: Beware the Pebble!

Joe "The Shield" Higgins was the true Father of Chaos Theory:

Posted by Scipio at 8:03 PM 6 comments: Links to this post


I want to finish up my little series on marriages in the DCU2 by looking at how it all fits into the bigger picture.

It helps a comic company when it has great or even 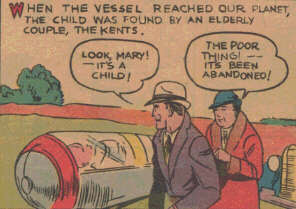 good characters. Even I am happy to admit that Marvel, for example, has some great characters (although I don’t often like what Marvel chooses to do with them). But the overall mythic appeal of a comic book – or any fictional – universe is also dependent on how well it represents various aspects of human experience through archetypical characters.

One example of this concept that I’ve discussed before is parenting. The DCU’s ‘trinity’ (Superman, Batman, and Wonder Woman) represent, well, many things. Intentionally or not, one of the things they represent are three basic modes of being raised as a child: 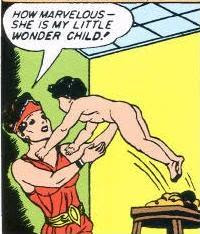 If we include a fourth, adjunct member in that “trinity”—Robin the Boy Wonder—then we get an even fuller representation of possible parenting:

Who knows? Perhaps DC will one day see fit to complete this particular puzzle and create characters with two mothers (Super-Heather!) or two fathers (like Connor Kent, but, um, we probably shouldn’t think about that one too deeply). Perhaps Apollo and Midnighter will adopt? Oh, I hope not. Gay couples always adopt Asian girls, so their child would surely be a Sword-wielding Kick-Ass Asian Ninja Chick. There’s too much of that cliché in comic books already; editors think that all fanboys love SKANCs, apparently.

Returning to the “trinity” again, they represent not just the three basic mo 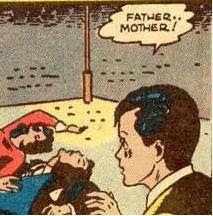 des of parenting but the three basic modes of becoming a parent:

I’m well aware that the uniquely mythological means of Wonder Woman’s birth—pygmalionization—isn’t really an option for those of us not in really tight with the gods. But it serves to symbolize all instances where someone becomes a parent through extraordinary means (artificial insemination, cloning, macro-mytosis… you know, that stuff).

Interesting though this may be… it’s not my current point; it’s just background. You are welcome to discuss it, but I mention it only as an example of how DC's iconic characters can be used to display the variety of human experience.

As the song goes, first comes love, then comes marriage, etc. And marriage and romance (or the lack thereof) are the subject of our current series.

Clark “not getting the girl” was part of his schtick for sixty decades. Now, Clark is no sad-sack like Peter Parker, so I’m not going to call him an “unhappy bachelor”. Superman’s not really “super” if he’s consistently unhappy. But it was always made clear that being Superman, wonderful though it was, meant giving some things up , or at least putting them on the back burner, including romance.

I would call Bruce Wayne a “confirmed bachelor” but nowadays that’s just code for “gay”, which Bruce is not. Marriage or even a serious romantic relationship is not for everyone. Bruce has a fulfilling life full of purpose and on-going accomplishment, has close emotional relationships, and surely takes care of his, um, needs with other like-minded singles. But having—or looking for—a girlfriend has never been essential to his character. To the degree that one considers Bruce “happy”, he is a happy bachelor. Bruce is, at heart, a “Down With Love” Girl. It’s just that instead of eating chocolate he beats the tar out of demented freaks and dangerous criminals, which is better for society and much less fattening.

C’mon; we all know it. Hal hooks up; Hal gets booty calls. It’s not just being played by Ryan Reynolds in a movie; it’s not just a post-Rebirth Geoff Johns’ characterization of Hal. Although both of those certainly help. Even Pre-Crisis Hal… well, let’s just keep this simple: Arisia.

Barry Allen, as recently discussed, was kind of a “player” (at least, had great potential for it, dampened only the Ever-damning Evil Eye of Iris West, Meanest Woman Alive). And he’s a known magnet for Sexy Extra-Dimensional Action Scientists and the occasional Oscar-winning actress. But he’s not a man-whore like his best bud, Hal Jordan. Barry Allen’s not a ‘hook-up’ kind of guy; he’s more of a ‘speed dater’. I’m sure Barry make every woman think she’s the only woman in the world … when he’s with her. Only Iris West knows better, because she knows What Evil Lurks in the Hearts of Men.

However one feels about Mera, Arthur Curry was the first married superhero, the king who found his queen. The tragic end of their storybook romance was the truly end of the Age of Innocence in the DCU. For better or for worse, Aquaman stands for The Married (and sometimes Divorced) Superhero.

Most of what current readers think of as J’onn’s essential background consists, in fact, entirely of post-Crisis inventions and retcons. That’s understandable, given that J’onn pre-Crisis backstory was, well, I think “difficult to work with” is the kindest way I can put it. So nowadays one of the strongest elements of J’onnz background is the lost of his wife and children on Mars. J’onn is one of the most significant widowers in DC comics (perhaps in all comics, second only to—of all people—Frank Castle).