Because you can't handle it. 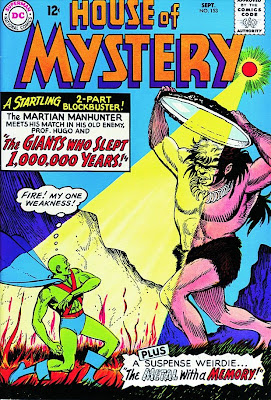 Remember how at the end of Time Bandits, there's that chunk of Pure Evil that evaporates the parents when they touch it? Well, the Showcase Presents Martian Manhunter Vol. 2 is Pure Lunacy. If you buy a copy and drop it in your local reservoir, your city will look like a mass break-out at Arkham Asylum within 72 hours.


You are not ready for the Showcase Presents Martian Manhunter Vol. 2.

Compassion is a human emotion

You think Batman's a hard-nose?
Pshaw.

If you want an ice-blooded, pitiless hero
(outside of the Golden Age, anyway!),
your best bet is always: 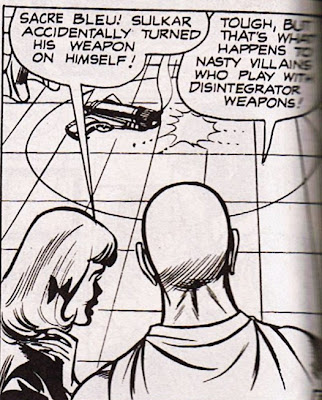 
At Big Monkey Comics, much of the wallspace in our main room is devoted to our "Comics Canon", a display that presents what we deem as representing the best of the medium in a broad variety of genres and styles.

The number of items of graphic literature in the Big Monkey Comics Canon is too large to display them on the Canon Wall at one time; at any point we have only about 50 or 60 on display. Our Canon is a living enterprise, and we add new items to it over time, so that the Canon Wall serves a kaleidoscope of comics' quality.

Our decisions about what to include in our Canon are based on other critical lists and our own expertise, but we also like to seek customer input... like yours!

And the Big Monkey website, we currently running a poll on which should be the next graphic volume added to our Comics Canon. Make your vote there from among these choices!

The Nightly News (from Image Comics)
Ghost World
I Shall Destroy All the Civilized Planets
The Nightly News
The Bizarre Comics of Boody Rogers.
Locke & Key
Arab in America
Kyle Baker's Nat Turner

Tempest in a Teen Spot

Tempest is coming back.

I really don't want to be negative about this; I mean, I have nothing against Tempest personally.

Okay; that's a bald-faced lie. Tempest -- "Garth" -- is a mess and always has been. Before he was Tempest he was Aqualad, a big-headed purple-eye freak, rejected by society, crippled by fear and doubt, and riddled with insecurities. And that was in the days when sidekicks were plucky, adventuresome lads. Those were his best days.

Then he fell under the sexual thrall of Aqua-Chick, becoming the whipped scream atop her hot java of love. Then, after she went to the big fish fry in the sky, he was reduced to being the ninth wheel in Marv Wolfman's superpowered DeGrassi spin-off called "The New Teen Titans". And he was now named "Garth". Garth. Hanging out with "Gar(field)". Wolfman, these are superpowerful heroic beings, not housecats. I should get housecats and name them Garth and Gar Garling. Except I don't like cats, any more than Wolfman seems to have liked either Garth or Gar, the perennial scrubs on a team of BMOCs.

As if naming him "Garth" weren't bad enough, he re-codenamed him "Tempest", probably because (1) it sounds really angsty and (2) Wolfman never got the chance to give Marvel's "Storm" that little brother she always wanted. Your opinion is sought: is it a step UP or DOWN to go from writing the Howard the Duck newspaper strip to writing the adventures of Garth Tempest?

Who, by the way, now had the same powers as, well ... as Zook, the Martian Manhunter's pidgin-paroling pet from the later Silver Age, making him about as scary as the repairman from RJH Heating & Cooling. Oh, but, those powers were... magical. And now Garth has a tatoo. A magical tatoo. "Tempest" seems less like a DC superhero than a collaboration between J.K. Rowling and Satoshi Tajiri.

Then after the New Teen Titans disintegrated -- as squabbling teenagers will do, despite their teary-eyed professions that "You're my real family!"-- Garth became the whimpering whipped boy of another aqua-chick, the Daisy Duke of the Sea, Dolphin, who was one of Aquaman's cast-offs. Icky. Dude; have you not heard that there's lot of good fish in the sea?

When Tad Williams got his hands on the aqua-cast he had the guts to recognize what "Garth" was: a feeb, and he portrayed him as such. A powerless underwater asmatic suffering from stress-related aging? Perfect.

But now "Tempest" is coming back, and he's still wearing his ice-skating costume. Say what you want about Pozner's Aquaman suit (on which Tempest's is based), but at least it was remotely defensible as camouflage. Tempest's outfit is not even remotely defensible as camouflage, except in those few stories set at the ISU Championship or Cirque Du Soleil. ("Surround by water===frozen water! Will Tempest find a way to breathe easy and survive... the Rink of Doom!?")

At least one good thing can be said about his comeback, based on that cover; he appears to have drowned Roy.
Posted by Scipio at 8:39 AM 17 comments: 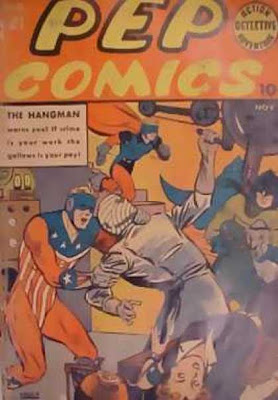 As the "Red Circle" series looms on the horizon of the present DCU, like a rising sun shedding its Golden (Age) light on another shiny day in the Platinum Age, that same sun is setting in the Pep-py past. As the Shield's day in the sun begins its close, the light yellow backgrounds that stream across his adventures fade to a darkening red, in the same way that America's post-war glory was gloomed by the spread of Communism.

On this cover, the Shield strangles a young Dr. Tommy Elliot, who was only trying to use his multiphasic crankshaft to pry off the out-of-control cinchbelt that's obviously crushing that poor, fainting woman. Poor, misunderstood Tommy; it's incidents like this that drive you to become a poorly defined MacGuffin in later life.

Meanwhile the ever-charming Hangman prepares to do something just off-panel to the woman's lower regions, armed with great handfuls of grey goop; hey, as long as she's already fainting, Hangman's thinking...!

In the background, Dusty dashes in uselessly: "Er, sorry, I'm late guys! But I met this really keen red-headed guy named Andrews at school, and he's talking about forming some kind of club for youngsters... ."
Posted by Scipio at 8:00 AM 5 comments: