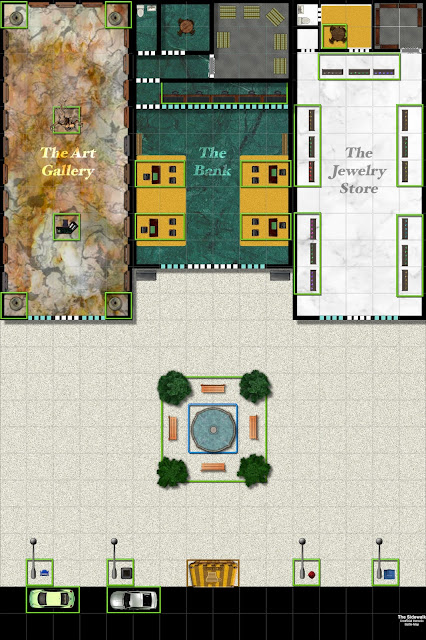 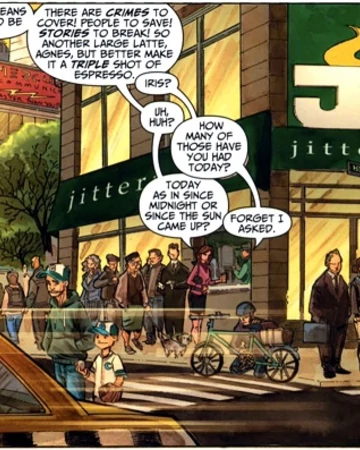 I like to imagine that, whenever fiction (especially comics, with ALL-CAPS text) refers to "the gallery," it's a sign that Indonesian astronomer Pik-Sin Thé's family owns most of the city's businesses. There's also a part of me that wants to hypothesize the Jitters family trying to start a chain of in-gallery jewelry stores (sort of a Taco Bell Express for villainy) but were forced out of business by Thé Cartel.

The important point, though, is that the Rogues never started down the path of wacky thematic crimes. Are they the only city's villains that never tried to contrive a fancy mirror convention (where Professor Angel made his connections, back during the war) or a tops of royalty exhibit or whatever.

Unrelated (not that I was off to a good start), but the first picture triggers a thought of something the CW show seems to lack: Inclines. We see Barry run up walls occasionally, but they ignore the part where he executes a perfect ninety-degree turn that could bash the back of his head in. But the skyline says he probably shouldn't usually need to do that. It's only bizarre aberrations like the Wiggins building (the fast casual restaurant with Central's saddest skyscraper erupting from the middle) having perpendicular lines near the street.

Actual question about a game I've never looked at, though: How well do the maps fit the setting? Every time I tried to fiddle with miniatures in superhero role-playing games, it seemed like scale was a problem unless the fight was carefully designed. It seems like, especially with the Flash, you end up in a situation where he should be able to basically be everywhere on the map at once and still have time to leave town to meet the Jitters caravan on a lonely mountain road to show them his priority card...or the Flash equivalent to that story, rather.

"Are they the only city's villains that never tried to contrive a fancy mirror convention " Sorry to disappoint you:

But yes, as a general rule the Rogues in general had thematic weapons but not thematic targets (unlike, say, a Batman villain, who are all about priceless collections of Etruscan snoods and ancient pre-Incan Moth Idols).

"superhero role-playing games"
Heroclix is designed so that with, say, the Flash, speed mostly equates to being able to travel a greater distance rather than being able to do more. That is, a Flash figure may be able to move 13 spaces rather than, say, 7, but he can still only make one or two attacks a turn, so the advantage isn't overwhelming.

Hmm. I always assumed the Flash made the 90-degree turns (I assume you're talking about the junction of the wall and the ground) by leaping either up or down to the perpendicular surface, landing in a basic runner's crouch and accelerating from there. Depending on his speed he could be leaping from various distances from the perpendicular surface. It all happens too fast for the eye to see. I know a lot of the depictions show a right-angle turn, but I chalk them up to artistic license and eye-blurring speed.

Now my personal theory is that Flash shifts most of his mass, and the mass he adds through acceleration, into the Speed Force, so at top speeds he's nearly intangible (the vibrating through objects trick). He'd be more of an image than a physical human at that point, which could also explain 90-degree turns with no inertia or impacts. Anything or person he's carrying within his "aura" is similarly affected. He regains mass as he slows down.