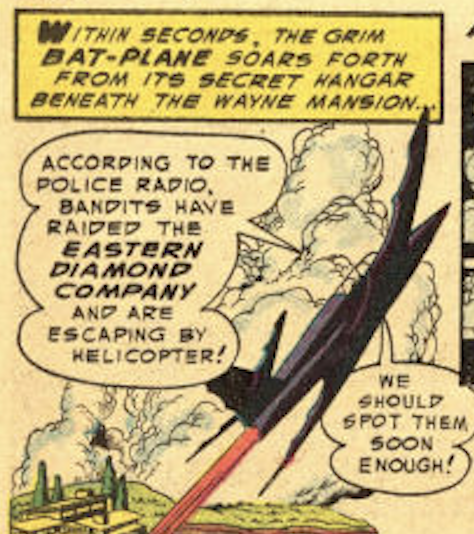 Wait. How old is that baby, where he hyphenates Bat-Man, but Batman and Robin don't...? And don't be silly, Bruce isn't going to murder the baby. He'll just stand idly by quipping about pitard-hoisting while the baby falls into its own deathtrap.

I like Batman's attitude with the bomb. "I've defused this, so it's completely harmless, so now let's make sure it doesn't accidentally impede the helicopter's landing." I'm not sure how that helps him or even if that disrupts a helicopter, but that's extremely thoughtful for a man who's about to pummel two sharply-dressed guys in very tight quarters.

The perspective on those stairs wins the day, though, with Robin incoherently screaming at a baby coming in a close second...

"he hyphenates Bat-Man, but Batman and Robin don't"

The only guess I can offer is that maybe the hyphen is supposed to mean that he's saying it somewhat slowly?

I don't know much more than the minimum about babies, but I notice that he's old enough to talk (AND to walk) yet young enough to still be in diapers. That would mean that he can walk up and ask an adult to change his diaper and, no kidding, I have honestly never heard of a real-life baby doing that. Is that in fact a real-world phenomenon? Or does it just prove that the writer didn't know any more about babies than he knew about, you know, anything else? :-)

I'll weigh in, cybrid. Yes, toddlers can walk and say words, but still be in diapers. My daughter used to go into the bathroom, get her training potty, and carry it out to the living room to do her business because she didn't want to miss her TV shows.

If they're still in diapers after they're about two, then you probably want to take a more firm approach to potty training.

On another note, suppose the baby DOES start saying "Bat-Man" in front of others. This IS Gotham City, right? People probably talk about Batman every day, and that's where children get words from in the first place, from what adults say within their hearing.

Even if he got far enough to say "Cousin Bwuce is Bat-Man," well, kids do indeed say the DARNEDEST things...

And since Robin was The Sensational Character Find of [April] 1940, that means that Batman accumulated nearly a year's worth of trophies all by himself. Which, since even by golden age chronology standards, Robin couldn't have been active for more than a full decade (1940-1950) without reaching his twenties by that point, is kind of moot, I guess. ;-)

Good point, cybrid. You have to figure that Batman is regularly referenced in every Gotham household, so just saying the name in and of itself isn't particularly damning.

Bruce is clearly looking for a reason to gack the kid. He's probably worried about losing mansion headcount, what with Alfred threatening to quit. Alf may also have a pretty solid lawsuit based on job description/discriminatory practices. Even Batman needs a solid HR department.