Does Martian Manhunter #8 herald the return of one of comics' most gloriously stupid villains?!

Yesterday, I read Martian Manhunter #8 and, as a result, I have a theory. 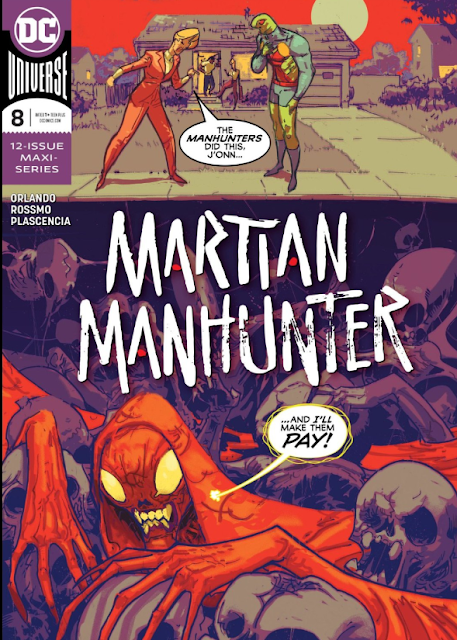 It's rather out on a limb, but I can't shake it.

This odd miniseries---well, it's Martian Manhunter, how could it NOT be odd--has focused mostly on two things in its eight (wow, that's a lot given how little has happened) issues: J'onn's less-than-honorable background on (extremely weird) Mars as a crooked cop and his relationship with his police partner, the visually memorable Diane Meade:

While wending its way through J'onn's backstory, the creators have shown us the Vulture organization and Mr. V:

For the unknowing, "Vulture" and "Mr. V" are from Martian Manhunter's secret agent phase back in the late '60s.

The story also name-drops "Dr. Trap", a villain from J'onn's time as the Bronze Wraith in the Justice Experience (a sliver retconned into his past by the Kate "Manhunter" Spencer series, the one that tried to make create a Mary Sue to serve as the Jack Knight of all DC's manhunter-named properties).

Based on these throwaways (and some other incidents too spoilery too share), the miniseries seems interested in folding in some pretty diverse aspects of Martian Manhunter lore.  Which is why THESE have me thinking: 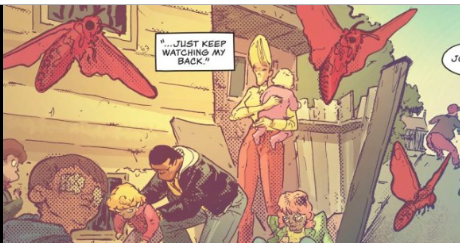 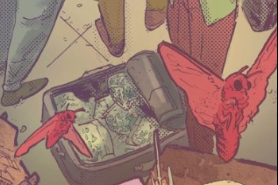 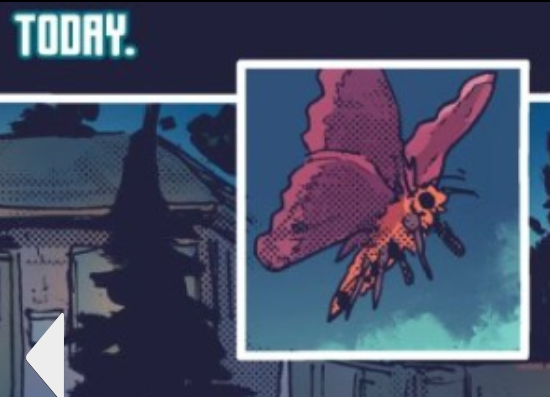 On the one hand, moths could just be a metaphor for the Martian race; drawn to the flame that destroys them, and all. That would be a rather naturally grab for someone writing about DCU Martians.

COULD THESE BE A HARBINGER OF THE RETURN OF MR. MOTH?!?!?! 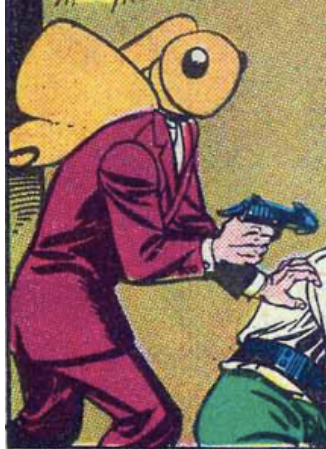 I certainly hope so, and that his updated version shines with all the glory he deserves. If that happens, DC, there is much I will forgive you for....
.
Posted by Scipio at 9:53 AM

To be fair to Kate Spencer, she came on the scene near the end of when DC was trying to spackle the Martian Manhunter, Wildcat, or Apokalips into any gaps in continuity they could find, not to mention letting writers create completely forgettable "critical" heroes (like Aztek), the idea of retroactively building a legacy (even when some hacky methods were used) seemed like a natural next step.
That all said, Mr. Moth would be a huge step up!

I applaud your ability to get through this series. I read the first issue and was so appalled by the writing and hideous art that I virtually threw up my hands and have left it far, far behind.

I've read some of the issues and, until now, forgotten them. Layering more crap onto a character's origin is an automatic "nope" for me.

That said, Mr. Moth could lure me back in. Maybe he and Apex Lex could bring crazy crime back to Apex City.

There's a lot of overkill in the plot. J'onn is already the (mostly) last member of his species, all of whom died suddenly and horribly ending his civilization. Does he really need MORE tragic backstory? Did he really need to have been a corrupt cop before becoming a good superhero?

I have always liked Diane Meade, but her backstory as a bisexual trying to Keep Her Secret is already badly outdated. And does it really take EIGHT ISSUES for her to come to grips with the fact that her partner is an alien? And does it matter if... we are never going to see Diana Meade again?!

Not so much in police work as in other venues, though, particularly for a woman. Michael Chiklis's "The Shield"'s depiction of the issue was eleven years old, true, but I'm presuming this miniseries is set even longer ago?

I generally avoid absolutes, but nevertheless, I say it's ALWAYS a mistake to try to give a hero more "depth" by heaping character flaws or a shameful past onto them. I can't think of a single time it improved things. It's made more than a few heroes worse, though. (If anyone can come up with some examples where heroes were improved by the revelation that they were bigger jerks than we thought they were, I'm all ears.)

BTW, off-topic, for no particular reason (except that I'm re-reading some of your golden age Green Arrow posts), it occurred to me to wonder if you've ever featured a golden age story from a publisher that was neither DC nor Marvel (aside from the recent Moth story) and, if not, if you think it's likely you'll feature such a story in the foreseeable future.

That's not a request, because you don't like those, I'm just telling you what I was wondering. ;-) Take care.

You mean, like "Pep" Comics from MLJ, starring the Shield and Dusty the Boy Detective...?

I have spent countless hours and many posts on exactly such stories:
https://absorbascon.blogspot.com/search?q=the+shield

I'm sorry. It's been so long, I'd forgotten about those. Please forget I said anything.

I thought the Bronze Wraith/Justice Experience continuity insert was from "Chase," not "Manhunter."

You're right, Hal, it is; sorry, but frankly I get "Cameron Chase" and "Kate Spencer" confused easily, because, well...you know if you have read them both.

Bronze Wraith predates both of those - it was in the Ostrander Martian Manhunter solo.

Turns out those moths meant nothing. Or were some sort of metaphor for change. Which is stupider than nothing.