No, I do NOT like Heath Ledger's performance as the Joker, thanks for asking.

Recently, the Rotten Tomatoes-eating public voted Heath Ledger's entrance as The Joker in The Dark Knight, the most memorable cinematic moment in the last 21 years.  This, of course, is patently absurd, since most viewers would AT BEST be able to quote the line "I kill the bus-driver" and be unable to describe much of anything else done or said in the scene.

It goes without saying that this says MUCH more about the cinematic habits and discernment of the average movie-goer than it does about Ledger's performance.   I mean, really now.  Need I remind you that THIS scene from Deep Blue Sea (1999) also occurred within in the last 21 years...

If you have seen both films, there is no way you remember the Joker's entrance in The Dark Knight MORE than you remember Samuel L. Jackson suddenly getting eaten by a shark in Deep Blue Sea in mid-sentence during a Standard Rousing Bad-Ass Speech.

It also says a lot about how Fanboys Be Representing when such things arise, since their are a lot more Batman/ Joker/ Dark Knight fanfolk than there are DeepBlueSea-fanatics. ARE there Deep Blue Sea Fanatics?  I'm not sure I want to know.

And it says a lot about people's ability or willingness to follow instructions; clearly, people voted based on whether they LIKED a moment, not how memorable it was. 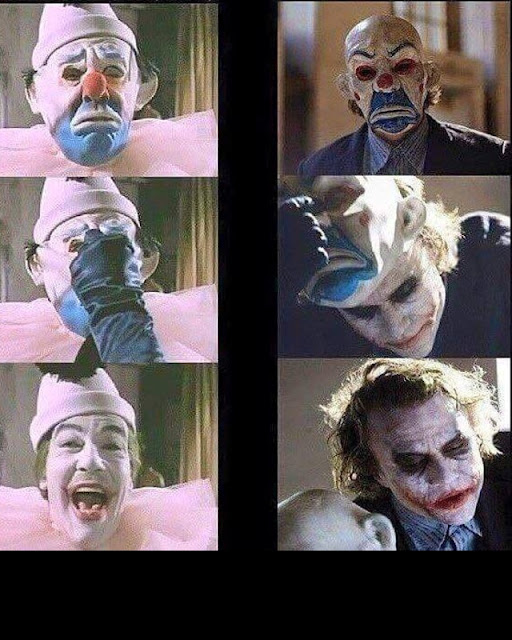 The difference, as Megamind would say, is presentation.  NOBODY makes an entrance like Cesar Romero's Joker.

Now, THAT is an entrance. No bus driver required.

I know that many people revere Ledger's performance as The Joker but for most part it seems like boilerplate adoration, without much critical analysis.  Look, Ledger certainly did a better job than anyone had a right to expect, especially since much of his past movie work wasn't all that... deep.  Hat's off to him for proving that he was more than just a pretty face while he was with us.

But Ledger's Joker, while admittedly intense, was also clearly ... not genuine.  There was little sense that this was an actual crazy person or an evil genius with a wicked sense of humor.  Ledger's Joker was an act, a put-on, a disillusioned man putting on a crazy act to convince others, and himself, that he didn't care about anything. But he did care; he was a nihilistic ideologue DESPERATE to prove his point to others, and painfully needy.  He didn't leave chaos in his wake; everything he did was painstakingly choreographed.  He seemed like a sad clown, eager for approval by the audience; a tough guy, eager to show much he didn't care; a tragically realistic man, eager to come off as a lunatic.  Ledger's Joker was... just a terrorist.  Because I guess that's what scares current-day audiences.

The script is to blame, of course, but Ledger didn't help.  Most viewers were just impressed that Ledger's Joker seemed menacing, because the Joker can seem pretty silly and nonthreatening if done wrong.  And Ledger's Joker was menacing... because both the character and the actor were obviously working really hard to MENACE.  The Joker shouldn't work hard at being menacing, he shouldn't have to try to seem crazy, and he shouldn't really care what you think.  I can't believe I saying this (because I didn't like Jack Nicholson's Joker all that much) but... Jack Nicholson got all of that. Nicholson's Joker had no idea anything was wrong with him, had fun during his schemes, and certainly didn't care whether you got the joke or agreed with his worldview.

Cesar Romero's Joker never tried to seem threatening... but was deadly all the same; that was part of the point of his performance.  His Joker actually just thought it was really funny to feed you to a giant clam.

Ledger's neurotic tics and slimy speech patterns were clearly affectations of both the actor and the character, suitable more to that homeless guy you avoid in the park than Batman's archenemy.  To top it all off... Ledger couldn't laugh.  There are thousands of people in the world who can do a Joker laugh; why can't Hollywood ever find someone who can?

Very much yes. Ledger's Joker reminds me of nothing so much as Alan Brennert's take on the Scarecrow (from The Brave and the Bold #197), who Batman and Catwoman (of Earth-2), even in their fear-induced deleria, more or less write off as a didactic jerk who'd rather endlessly lecture the good guys than commit crimes. He's not a bad villain, but he's a lame Joker. Lex Luthor also comes to mind as a very good match for that portrayal, capitalizing on academics to prove he's better than the hero.
To me, The Dark Knight goes in the same category as The Matrix and Fight Club, though, where a superficial point in an introductory philosophy course gets overblown into a feature-length A-plot, adds a ton of violence, and is somehow considered intellectual. And Trolly Problem: The Motion Picture, especially, would have been much better if anybody had called out the Joker on his crap.

Also, R.I.P. Giant Clam. Never even got her own spinoff...

And, I kind of don't have a problem with the occasional "off-model" interpretation of the Joker. Orthodoxy and the Joker don't mix. There are some takes on the Joker I like better than others, but the only real way to screw up the Joker is to have a the Joker who is too predictable.

"And, I kind of don't have a problem with the occasional "off-model" interpretation of the Joker."

I don't either, and I can extend that to pretty much any comic character. Or any fictional character (for example, the new Star Trek movies). I guess growing up on a diet of "imaginary" stories, What If?, and Elseworlds has inoculated me against adopting a "prime" universe and dismissing all others. I still have a "prime" universe in my head for most fictional worlds, but have no problem looking at something else and saying, "That's an interesting take" or "No, that didn't work at all."

That said, I don't consider Ledger's Joker to be definitive. I'm still generally opposed to the mass murderer/serial killer Joker because I think it's both limiting and, frankly, uninteresting.

"Alan Brennert's take on the Scarecrow (from The Brave and the Bold #197), who Batman and Catwoman (of Earth-2),"

Wow. I remember that. And that astonishes...even me.

I have every confidence Grant Morrison is working on something.

I don't think anybody has a problem with Ledger as a Batman villain or the Joker having multiple interpretations. This particular interpretation, however, only works because the movie moves too fast to stop and think (which isn't a bad thing in this style). But, like Scipio points out in the post, the pedantic/academic bend, the meticulous planning that needs to account for dozens of possible outcomes to nail the sequence of events that actually happens, and the flashy entrances...they can all easily be the Joker, but they can't be a nihilist or an agent of chaos or whatever actual phrases the movie uses to describe him. The movie wasn't bad, but it could've been much better if Batman kind of wanted to treat him like the teenager sulking in the corner about how much he doesn't care what people think, then repeats it more loudly when he doesn't think anybody heard him.

As for the Brave and the Bold story, that's still one of my favorite books, probably just about when I started reading comics seriously (and so offended a couple months later when we got Geo-Force, instead...), up there with Bob Haney's weirdly serious treatment of Plastic Man as a superhero with depression, #95, #123, and #148, but I only learned about those many years after the title folded.

I sincerely don't understand your criticism of the Joker's motivation. You point out his apparent hypocrisy by saying: "Ledger's Joker was an act, a put-on, a disillusioned man putting on a crazy act to convince others, and himself, that he didn't care about anything. But he did care; he was a nihilistic ideologue DESPERATE to prove his point to others, and painfully needy" but the Joker's point was never that nothing is ever worth doing. He wasn't a complete nihilist, is position is simply that conventional morality is a lie. It's not a very philosophically "deep" position, nor is it meant to be. Nolan wasn't trying to make the audience ponder the implications of moral nihilism by giving the Joker this motive, he was simply trying to make the Joker more sympathetic. If the Joker's world view is correct then he doesn't have to accept responsibility for horrific crimes, which is why he is so desperate to prove his world view to himself as well as all of Gotham. If he is wrong then he's a monster, but if he's right then he's just like everyone else. The phrase "Trauma does not make an abuser" is essentially what Nolan was trying to communicate with the Joker. To me, this is an incredible way of giving sympathy to a seemingly irredeemable character. This is also what makes Joker's rivalry with Batman so unique, as Batman is the living annihilation of the Joker's world view. He's someone who has experienced trauma but used it to make himself into a better person. He even points out Joker's bullshit saying "What were you trying to prove? That deep down everyone's as ugly as you? You're alone." In my opinion, if Nolan had made the Joker into a lunatic who's only motive was to entertain himself, the central conflict of the film would have been FAR less emotionally resonant.