Derek Lancaster says, "If you can't love Batman: The Brave and the Bold, you can never truly love me."

I'm not sure whether I've ever mentioned it here on the blog, but I went to an Ivy League school. Ivy Leaguers, as a rule, will gravitate toward one another in larger social settings. But go to any function with nothing but Ivy Leaguers, and then we all hate one another, so the evening usually sounds something like this.


Anyway, Ivy Leaguers aren't the only group that outsiders think of as a lump who can get snotty with one another (although we do get particularly snotty). The same phenomenon occurs in any group; scientists, outdoorsmen, singers, whatever. And, of course, comic book fans... .

Usually, such in-sniping is all in good fun. But occasionally it bites back; have you ever had this (or the equivalent) happen to you...?

You've met this guy (or whatever) and he's hot and kind of sweet and chatty and into you, and something comic booky comes up and you're hesitant to 'come out' of the comic book closet, but then he's all, "Oh I love comics, too!"

At first, you think, "OMG; excellent! My future husband." UNTIL...


Yes, they let loose with some comic book opinion so absurd, so benighted, that you're dumbfounded and unable to reply. "NO. You did not just say that. Please unsay that. My future happiness is dependent on your not having said that... . "

Because, yes, you can be friends with someone who loves Wolverine. But you can never, never marry them.

In this way, our love for comic books keeps us apart more than it brings us together.

Has something like this ever happened to you?
Posted by Scipio at 8:21 PM 32 comments:

Sorry to bludgeon you with mere video links, but...

well, this one is simply couldn't resist. Because it's... oh, so true to form

The Finest Norwegian Superhero Short Ever Made! 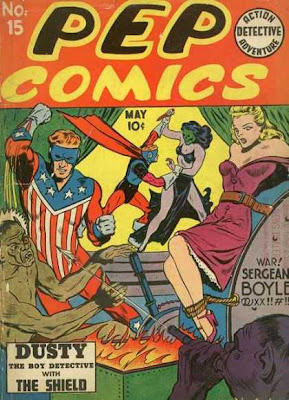 "I'm so lucky; me, a half-naked jungle savage on a date with Fantomah! She looks just like a supermodel...

While we're here at the Jungle Theater, waiting for the show to start, I'll get her something at the concessions stand. I wonder what's good...?

Delicious! Roast Blonde cooked over a Sergeant Boyle brand "War!" grill (model no. 00XX!!#!). No Jungle Woman can resist it! Let me catch the attendant's eye...

Security! Shoot him in the head, quickly! NO! NO, NOT ME, YOU IMBECILE, NOT M--"