I declare July 5 to be "Independents Day" for the celebration of independent comics. I celebrated by reading something I've been dreading for a long time: Invincible.

I first heard of Invincible from the collectors set of the Heroclix they put with him and his cast. Since they, I'd heard a lot about how good it was, and that was what had me so frightened. Let me not fall in love with another universe to follow!

Well, I picked up issue 50, and my fears were fully justified. It was really good. With virtually zero prior knowledge of the characters, I was able to follow everything that went on in the book. Okay, maybe the "my new father figure betrayed me and is evil just like my real daddy" angle is a bit trite, but, hey, it's an Image comic. Did I just get myself hooked on an Image Comic? Please don't tell my mother.

Anyway, that's my main foray this year for Independents Day. I know it's not exactly a HUGE leap, since Invincible from Image is about a mainstream an "indie book" as can be imagined. But one starts with baby steps.

What independent do you read, intend to read, or would recommend to others to read?

Next on my personal list: I Was Kidnapped By Lesbian Pirates From Space. All the back issues are already on order....
Posted by Scipio at 3:55 AM 19 comments:

That's What It's All About, Isn't It? Although there are exceptions. Or even a glow that men admire in the reanimated corpse of a teenager possessed by incorporeal aliens from another dimension.

Finally, as for clothing, remember there are three outfits that every girl's closet should have: a little black dress, a summer frock, and... Bending Over Backwards for Beauty

Here's the next tip from Ted Long, Make-Up & Makeover Master on Sure, it may not look good while you're exercising, but, hey, Barry Allen's been dead for 17 years but look how good he looks!

You may think all this advice is unsurprising so far, but here's a piece of Ted Long's wisdom that will turn everything you know about beauty-preparations on its head! Always greet guests from an inverted position!
How fabulous is that?

Oh, and remember the principles of highlighting; shine a convenient spotlight on your best features or any areas you want people to focus on. Skeptical? Don't be; trust Ted Long. Besides, look what it does for Barbara Walters: "Weh-wo, and wehw-come to the Vieweh!"
There ya go. If inversion can do that much for Barbara, imagine how much it can do for you!

I can confirm this from experience. Why, I've spent entire evenings in that position when entertaining numerous guests. And, to a man, they all said, "That was fabulous!"
Posted by Scipio at 6:36 PM 3 comments:

So, according to Ted Long, what is the next in

Well, having established his credentials and good faith, Ted was advising us on make-up strategy.

I learned this one the hard way. Tried to cover Roy's bloodstains on the carpet with concealer. Even the DC cops figured that one out. Thank goodness for nullification votes.

Remember, covering up is for the pros in the studios-- especially those working with Barbara Walters. Makeup is making the best of highlights and shadows (or simply staying out of the former and in the latter, if you're Barbara Walters)... Never use soap. Never. It could clog your pores resulting in pimples and blackheads.

What to use instead of soap? There are many options. Sometimes this is easier said than done!

But the most important thing to remember is: DO NOT LET DAVID MAZZUCHELLI DRAW YOU!
Posted by Scipio at 8:46 AM 4 comments:

As mentioned, I've been designing slide shows to run on the Big Screen all day long at Big Monkey ( please come visit us in DC sometime!). One of them has been a series of some 80+ covers of romance comics, interspersed with some "fast facts" about the genre.

One of those facts is that the Romance genre was basically invented by Joe Simon and Jack Kirby. Yes, those guys. And by that I mean not romance per se, or even the genre, but the genre in a comic book form.

Yeesh. The idea of Joe Simon and Jack Kirby inventing romance is enough to give even me the heebie-jeebies. No, strike that; especially me...

"Jack, I -- I want to talk about where our relationship is going!" 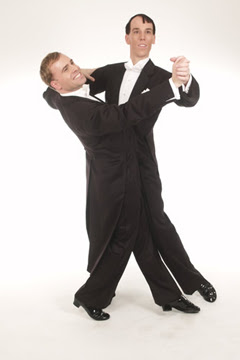 "Me, I'm more worried about where ar feet are goin', Joe;
now shut yer yap, I'm tryinna smile fer the judges!"
Anyway, this slideshow was inspired by the recent release of a reprint of DC's 100-page Superspectactular Love Stories from 1971. Which no one bought at my store. Except me. I cried myself to sleep that night, hugging the tear-stained volume to my chest, sobbing out-loud: "Why am I so unpopular at school? Why can't I find a boy who likes the titles I like? Why is the dog looking at me so strangely?" Because, you know, I get easily caught up in the spirit of things.

Now, there's a lot of fun to be had in this volume. In fact, you should run, not walk, out to get a copy. Preferably at Big Monkey. It'll be easy to find the book; I'll be standing beside it with a teary visage.

But my favorite part is the centerfold piece:

Who's Ted Long, you ask? I've tried desperately to find some sort of internet trail left by Ted Long. Most of the trails lead back to this comic itself, making it, I suppose, his greatest legacy. Think about that for a while. It's okay, Ted; I appreciate it.

I know at least that he was still making people look fabulous as late as 1997, because he was the key hair stylist on Waiting to Exhale, Panther, Dead Presidents, and Rosewood. And Ted was head stylist for the Today Show in 1971, so, if you'll pardon my saying so, he's had a Long career.

Okay, I'm from the world of 1971; let me annotate this introduction for you. "Super proud"; it's like being "super bad", not like having, say, "superventroloquism". It's not like some guy named Bruce Orgulloso jumps out of a phone booth saying,

"I'll handle this, for I am EGO-MAN! I am super proud, so your insults cannot harm me; my self-esteem is like a shield of steel! Narcissus, the Boy Wonderful, and I will take care of you, Sollipso!"

As cool as that would be. Tommy Roddy, consider it.

As for being a "hip hairdresser" who's "quite a doll"; well, even in 1971-speak, that doesn't necessarily mean he's gay. 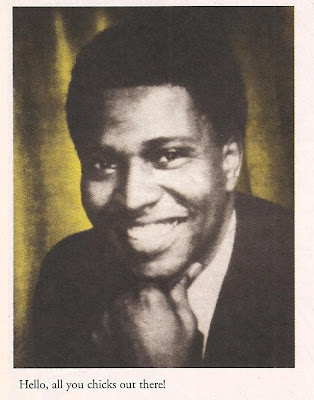 Not necessarily, mind you. 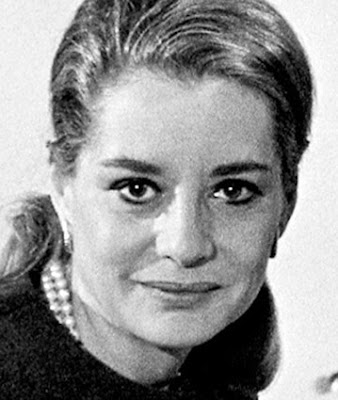 BW in 1970. Before, or after? You decide.
Note that Ted "helps" prettify Barbara. In 1971-speak, this means at least two things. One, what he does "helps" but no one's pretending it actually succeeds. Two, there are other people who sisypheanatically try to help roll this rock up the hill. Many other people. The Vaseline Technician. The Baffler. The Cheesecloth Grip. The Unsteadycam Operator. Why, they're all still with her today, on The View: 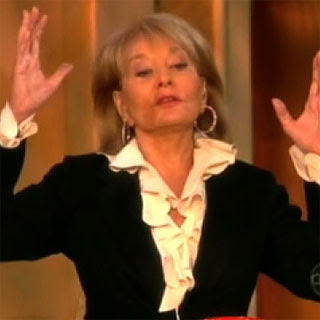 Okay, Ted, I'm with you so far; I'm already convinced you, Ted Long, know how to take full advantage of all your feminine qualities and become the real you men will love. Even in 1971. No, strike that. Especially in 1971...
Posted by Scipio at 8:26 AM 8 comments: 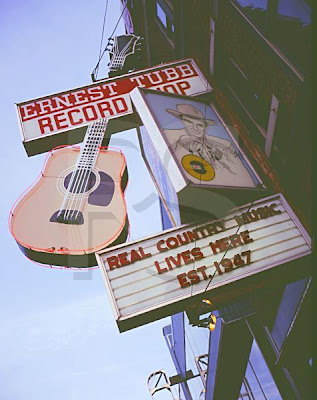