Meanwhile, back at the Atom's undercarriage, we discover...

that the court order that banished Superman from earth until Green Arrow could be caught by the authorities was requested by.someone named ...Cabeza Maestro. Which none of the Justice Leagues realized was "Head Master"; 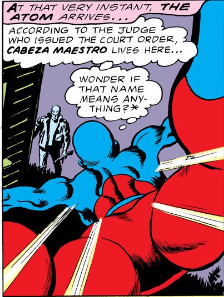 Once again, the answer to the League's problems is Vibe.


and that Headmaster, who I thought so cleverly was delaying the execution of the Leaguers so that their corpses would be fresh, as part of his plot to frame them and then get elected dictator for killing them, actually just... forgot to kill them;

I told you the bomb was a lie.  I bet he promised the Livergoons cake afterwards, too.


And that a Livergoon can't even stop talking enough to take the opportunity to kill three Leaguers, because he's too busy talking about how boring talking is;


and that the Atom's mighty undercarriage is strong enough to stop a bullet;

That's... is it wrong of me to think that's kind of hot? I don't care, it's what the internet is for.


and that the Atom's ingenious plan for not-exploding the bomb is, in fact, to let the bomb explode. 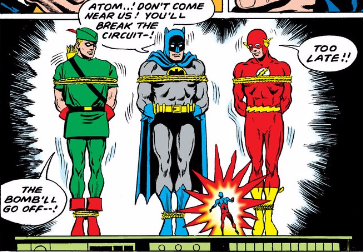 Avoiding collateral damage is not the highest of Atom's priorities. Or even 'one of them'.


Adding "exploding villagers" to the 1001 Ways to Defeat Green Arrow.  Fortunately for the villagers, THERE IS NO BOMB and the bomb is a lie.  Not that Ray cares.  Ray's all, "Exploded villagers, whatever, that's not carnage, I live with Jean Loring, I know what real carnage is."

Anyway, Atom knocks out Ringo, and Ollie, Bruce, and Barry go off to tackle John, Paul, and George, who (disguised as Batman, Flash, and Green Arrow) are "rampaging" through the nearby village, provided that "rampaging" means "causing minor property damage." 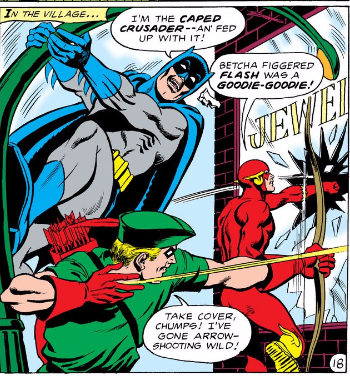 Holy crow, they just CANNOT SHUT UP WITH THE STUPID THINGS.


You know, if I had a Livergoon with sufficient super-strength to bend a lamppost with his bare hands, disguising him as Batman would probably not be my first instinct.  Just saying.

Next... the (exceedingly  non-)thrilling ending!!!!

Important, vital question: Are you making a proper list of 1001 to defeat Green Arrow, so that once it is concluded, we can gaze at all of them at once?

Sure. Take the one guy in the crew who doesn't have someone to impersonate, and have him stay behind to execute the forgotten prisoners. It's a good thing most of the team's on vacation. Were they planning to dress this guy up like Black Canary so he could push over some little old lady's walker?

Also, fake Green Arrow's arrows are red. Did they not stop to consider that, after the wood/titanium blunder at the start of the story, maybe using authentic arrows that they have on hand might be worthwhile!?