The Testimony of Green Lantern (and you know which one) 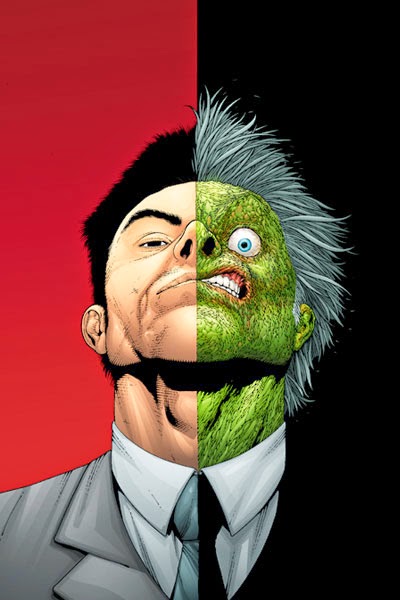 "Our next witness--"
THUNK!
"Goodness, are you alright, sir? We had no idea that there was any problem with the ceiling tiles!"
"No,  no, I'm fine; it hit me in the head."
"Please place your left hand on this Book of Oa, raise your right hand. Do you solemnly--"
"GREAT GALAXIES!"
"What's WRONG, sir?!"
"My god, look at my hands! THEY'RE BEAUTIFUL!"
"You're wearing gloves."
"Making it even MORE impressive!"
"Moving right along.  How would  you say you've been faring in the New52 universe, Mr. Jordan?"
"Ha! Aces!"
"Could you elaborate?"
"Well, I'm the favorite of the guys in charge of the whole universe!"
"The Guardians?"
"No, Geoff Johns and Dan Didio!"
"Oh?"
"Everything's been arranged around ME!  I got to found the Justice League, but I don't have to spend any time with them, because they make me look bad.  Instead, I'm, like, the leader and centerpiece of the entire Green Lantern Corps!  Which is the center of six OTHER corps they created just to make me more important! I'm the center of the universe!"
"I thought Oa was the center of the universe?"
"Not any more.  Oh, and there's like over 9000 new Heroclix coming out that all center around ME."
"Mr. Jordan aren't you being a tad... solipsistic?
"... .... Ring, define the word 'soli--"
"Self-centered, Mr. Jordan.  It's not all about you."
"Wow, maybe I should be an orange lantern! Oh wait; I AM!" 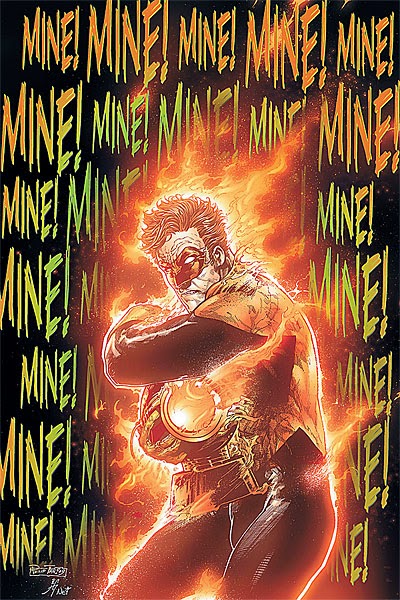 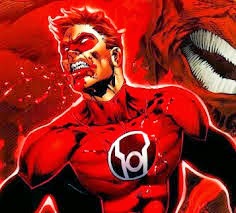 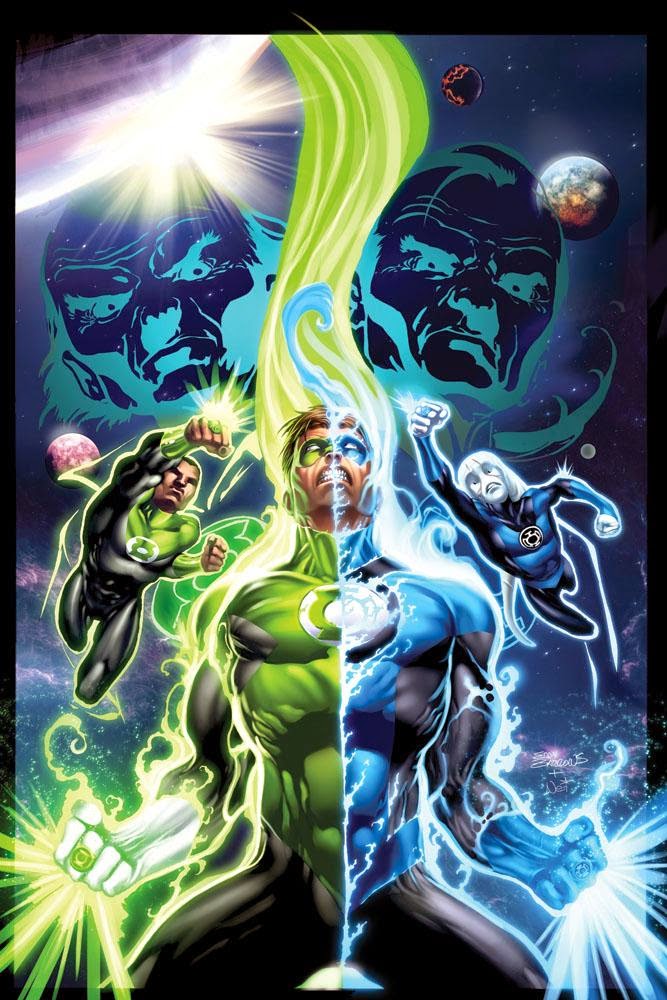 "That's a nice look, Mr.Jordan; I approve. Now about your supporting--"
"The UNIVERSE is my supporting cast!" 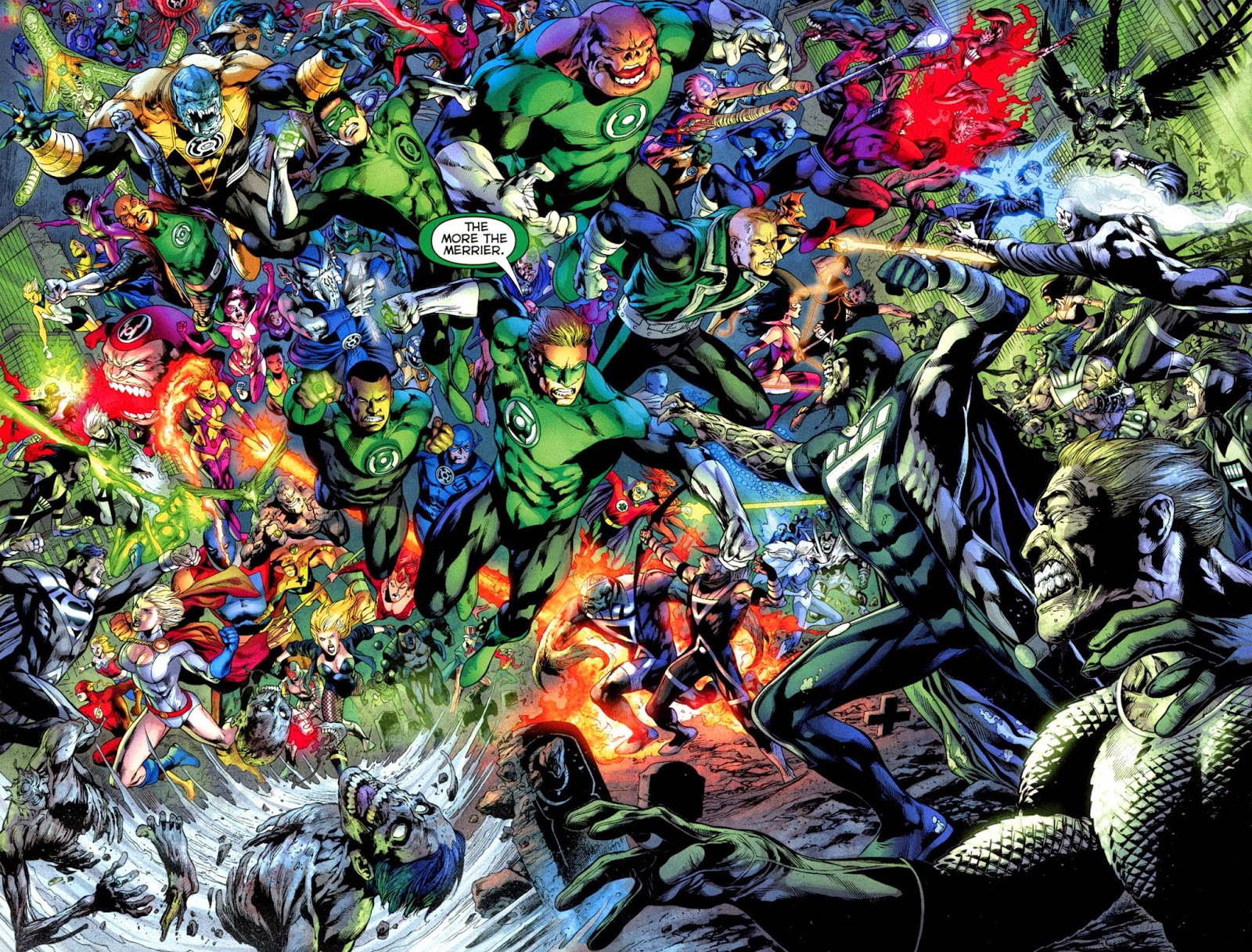 "So, you don't like the idea that DC may be planning to reboot this entire universe as early as next year?"
"That would ACES."
"I beg your--why do you say that?"
"Because it could be BIGGER. And it could center around me from the START, this time!"
"No more questions."

"My god, look at my hands! THEY'RE BEAUTIFUL!"
"You're wearing gloves."
"Making it even MORE impressive!"

I LOL-ed out loud with that one.

Y'know, there's a part of me that wonders if all of these infinitely panrealistic brouhahas haven't been engineered by the Guardians just to get Hal to take the Corps leadership role they offered him back in the day.

And if he won't do it, they'll give it to the Martian guy, who hardly even needs (or has) a costume.

Or maybe it's DC's reparations from the Denny O'Neil run. I know we're all supposed to swoon over it, but...

I definitely haven't enjoyed the updates to Green Lantern, as much as Hal has. The police force thing doesn't work for me, and it just further entrenches bad ideas like Kilowog.

It is rather awkward that the New 52 was conceived and launched right around the same time as the Ryan Reynolds Green Lantern movie, and obviously plotted around the assumption that the film would be a huge hit and kickstart an Avengers-like franchise.

No, I think that's mostly a coincident. The GL love is coming from Johns, not from dreams of a movie mega-franchise centered on Ryan Reynolds.

Objection, yer honor -- all of Hal's dalliances with non-green rings preceded the nu52. While they were kept in continuity, they weren't a result of the nu52.

That said, not that Hal on the witness stand would be able to appreciate it, but he's being written better than ever in his current title, so the nu52 is treating him very very well. Yeah he's a dope and a pretty poor leader, but he at least is vaguely aware of what a bad job he's doing. That's about as much self-awareness as he's capable of without undermining the core of who he is.

Yeah he's a dope and a pretty poor leader, but he at least is vaguely aware of what a bad job he's doing. That's about as much self-awareness as he's capable of without undermining the core of who he is"

This is hilarious. And so TRUE!

Oh Hal. I love you but you are a narcissist's narcissist.

Just happen to browse this post and was interested because of Green Lantern. Really funny stuff. I enjoyed the humor in this.

I hate to admit it, but this is just making me want to get back into reading Green Lantern.

I am so weak to Hal's pretty, pretty face.