Aquaman #2. "More food?" cutaway to "Mommy! Mommy!" LMAO! I know some of you aren't fans of Geoff John's willingness to embrace gore in comic books, but you have to admit: he's a great horror writer.

Flash #2. Barry took the time to pay for the apples. Of course he did.

Aquaman #2. "Maybe there's more food there." That was the sentence that made me realize that the language the Trench are speaking isn't just chicken scratches; it's an actual "Interlac-style" transliteration alphabet. The artist didn't have to take the trouble to do that, particularly since no one is likely to notice, but it's gets a big slow clap from me!

Flash #2. I love that Flash is dealing with crazy mad Silver Age science. And is kind of rough on treadmills.

Superman #2. Sure, the idea of a opponents that everyone except Superman can see is scientifically ridiculous. But then again... so is Superman. So I loved it; it was exactly the kind of thing you would have seen on the cover of a Bronze Age Superman comic.

Savage Hawkman #2. "With innocent lives in the balance, are Morphicius' newfound powers too powerful to stop?" Oh; apparently not.

Aquaman #2. If this were the Silver Age, "Aqua-Boy Goes Skiing!" would have been a perfect back-up story. Yeah, now I want a whole "The Adventures of Aquaman as a Boy!" series. "Aquaboy in Vegas!"; "Aquaboy at the Mall of America!"; "Aquaboy, Prince of the Salt Lake!". They practically write themselves!

Superman #2. Oh the comic book irony! "I've often saved the Planet by giving them headlines; but now their headlines are saving me!" Really, I'm highly amused that the "all-new Superman" reads just like it was written in 1974.

Flash #2. That is a perfect--and perfectly simple--cliffhanger to leave Barry with. Bravo, Manapul et al.!

Aquaman #2. Okay, the Trench are spooky and all, but if they really stop to eat their own, well, they're not going to be a very effective fighting force, are they?

Flash #2. Wow, the kidnappers dumped Iris as fast as they could, didn't they? I mean, who can blame them? And apparently, "mean" is the perfect insulator when you're hurled from a moving vehicle, because her hair doesn't even looked mussed.

All-Star Western #2. Okay, that panel of Jonah saying, "Evenin', boys" is one of the gayest panels I've ever seen (and I've read Anthro). Or maybe it's just me.

Flash #2. Um... Barry? What about the driver of the car? Oh, well, I hope at least your apple tasted good.

All-Star Western #2. Hm; since the first "doctor in psychology" graduated from Johns Hopkins in 1886, it's fair to say that Dr. Arkham is very much on the cutting edge of his profession, isn't it?

I have one of the new iPad touch-screen portable computer-like devices. It's what I'm reading my comics on now.

But I'm also using it for other applications, including watching videos/movies. High on my list of early purchase (right after the Filmation cartoons of Aquaman, Swift and Powerful Monarch of the Ocean) were the Fleischer Superman cartoons. If you've never seen them... well, do; they are still astonishing today, and even more astonishing when you remember when and how they were made. 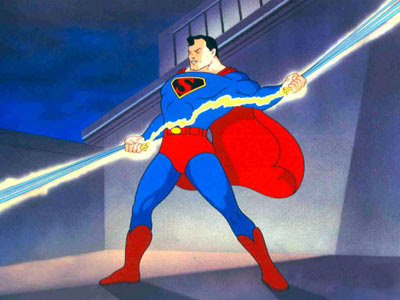 Entirely aside from being masterpieces of the art of animation, the Fleischer cartoons had an enormous impact in cementing much of the Superman mythos in the public mind (including the idea that Superman could actually fly, not just leap tall buildings in single bound, a transition that he made over the course of Fleischer series itself).

Superman does many amazing thing in the Fleischer cartoon. He fights lions, and robots, and Japanazis, oh my. He lifts heavy objects, he does moves quickly, and he withstands violent attacks by man, machine, and nature. But there is one thing he does not do (or hardly ever does, that I can tell)...

Granted, there's not a lot of talking in these cartoons at all. There's just enough palaver to set up the situations and for some lightly humorous/ironic epilogues with Clark and Lois. But once the fit hits the shan, Superman is all about ACTION. Superman has stuff to do, it's difficult stuff, and he has to do it fast. He has no time for chatter and no one really to chatter with any way. And it is bracing to see.

It makes for an interesting disjunct. Clark Kent is a man of words. He talks; he types. He's not cowardly, by any means, but while he's trying to talk his way around situations, Lois is stealing his press pass, jumping into robot's backs, and slipping onto top secret aeroplanes.

Superman, on the other hand, does not talk. It's nearly definitional: if the situation is dire enough for Superman to go in to action, there is no time or opportunity for talking and talking won't do any good any way.

It's an interesting and refreshingly simple approach. I'd like to see in tried in comic books. I'd like to read at least a year's worth of Superman/Action comics where Superman gives no monologues, be they inner (those are for supporting characters) or outer (those are for villians), engages in no dialog (if you want an interview, talk to Clark Kent), and just... DOES stuff.

I'd buy that for a year. Would you?