Time for some Herclix maps, because, well, the renaissance of Heroclix is one of the many things I have to be thankful for.
And since the return of the real Aquaman is another we have to be thankful for, let's celebrate with some underwater maps. First I'll remind you of my original underwater map, Mercy Reef, which still looks at pretty to me now as the day I first got it.
More fun, however, is the "Ray Ship" map from the resident genius at Curious Lurkings. Vehicles In The Shape Of Things are one of the great glories of comic books and few are as glorious or enduring as a big sub shaped like a manta ray.
Now, Aquaman-related clix put out in the past have not been as thrilling as we deserve, either in quantity or quality. But that's beginning to change with the wonderful new Black Manta, the Aquaman and Mera figures from the Brightest Day pack, and upcoming DC75th Anniversary figures of Aquaman, Ocean Master, and Mera.
So I've been upgrading my Aqua-clix, finally putting my Aquagirl custom on a Teen Titan Aqualad dial, finding a new dial for my custom Fisherman (Marvel's Karnilla, if you're interested) and revitalizing one of my most popular introductions to the game...
FISHCLIX 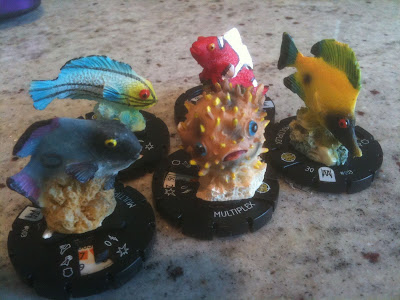 I like my fish like I like my women: pretty, but deadly, pawns in my larger game.
My original fishclix had individualized "powers" suitable to their species, but were, in the final analysis, just one-click pogs. Well, such pogs are no longer au courant in Heroclix, so my new-style fishclix all sit upon Multiplex dials. This works well for a variety of reasons. First, they have leap/climb, which means fish can slip out an opponent's grasp. Second, they have that neat Multiplex special power that reduces any damage done to them down to one click as long as they are beside another fishclix. Third, with the Suicide Squad ability, they heal every time an adjacent friendly figures gets kayoed (which can be interpreted either as rallying or, well, just eating whoever got kayoed). This qualities make them just perfect for swarming the enemy and tying up their ranged combat fighters.
And where will Aquaman and his finny friends be deployed?
ATLANTIS 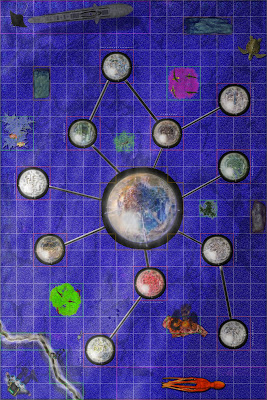 At first I was worried that the sea floor would be too boring and featureless a place. But by changing my concept of scale a bit, I realized that Atlantis's main dome (Poseidonis) would be large enough to constitute blocking terrain and the smaller domes (named for Atlas's mother and brothers) would serve as elevated terrain. Some thermal vents, vegetation and spawning areas, and a cold seep provide hindering terrain, with some outcropping as smaller blocking terrain. A few decorative touches (divers, some creatures, and a sub) and you have a surprisingly interesting little battlefield, whereupon you can fight to a finish or enact a scenario crafted around occupying the smaller domes.

I'm afraid the resolution here doesn't really do the map justice, but I'd be happy to send anyone the file who is interested.
Posted by Scipio at 10:48 PM 1 comment:

Marc Guggenheim, what on Earth-2 are you thinking?

Usually, I’m not given to pure reviews of new comics here at the Absorbascon. And Guggenheim was part of the beloved Sub Diego run of Aquaman (beloved by me, anyway), so I’m naturally favorably inclined toward anything with his name on it (even though he killed Bart Allen, who later got better).

But this new issue of Justice Society? Unacceptable.

Page one? Jay Garrick gets appointed mayor of Monument Point, a previously unheard of city (unheard of by me, anyway), and decides to retire from super-heroics.

Jay is a chemist and a superhero; why would anyone think to select him as a mayor and why on earth would that seem attractive to him? Oh, and he wasn’t elected, he was appointed. Guggenheim pretty much has to lampshade / handwave the affair, with less explanation and aplomb than was accorded Chief Screaming Chicken’s repossession of Gotham City in 1966.

Jay, retiring? What, again? Because… why? He’s tired? Or because the world’s fastest senior citizen doesn’t have enough time on his hands? It’s tough to reconcile such a decision with his “Barry brought me out of retirement” speech in recent issues of the Flash. In fact, it’s not in character any more than the near argument he has about it with Alan Scott.

Speaking of Alan Scott, let’s portray one of comic’s most experienced heroes as an overconfident, domineering blowhard, who gets his neck snapped because he doesn’t notice how tough his opponent is (the one who just kicked the rest of the JSA’s butts) and seems to forget that his magic ring doesn’t require him to be within 3 feet of his foe. Doiby Dickles wouldn’t have made that kind of mistake.

All these shenanigans are a clumsy way to take the JSA’s two most dominant figures off the table, I suppose so that some lesser lights will shine more brightly. Similarly clumsy is the, what, six hour fight (during which NO other superheroes/teams show up!!!) with the unnamed “super-terrorist” that destroys downtown Monument Point. Gosh, I wonder whether the heroes, feeling guilty, are gonna rebuild Monument Point into a wonderful new city of tomorrow and take up its protection? Oh, and what happened to Alan Scott’s ridiculous Moon Colony for Magical Friends? I must have blinked when editorial (if such a thing still exists) decided to ignore/retcon that away.

Look—there is NO bigger supporter of the individualized fictionopolis as the backdrop for superheroics than I. Having the JSA in NYC was awkward (no matter what the Past Scipio thinks). But why not simply use Civic City, the original location for the JSA? That would at least have a Golden Age connection and make Jay Garrick a (marginally) more logical choice as mayor.

Mr. Terrific has caught magical movie disease that is slowly lowering his intelligence? Oh ,for pity’s sake, the Kingpin-o-matic “Put the Heroes Through the Wringer” machine is going to burnout from being in overdrive; heck, it’s already broken the suspension of disbelief in the engine of my imagination.

Pep 37: Awakening from the Nightmare 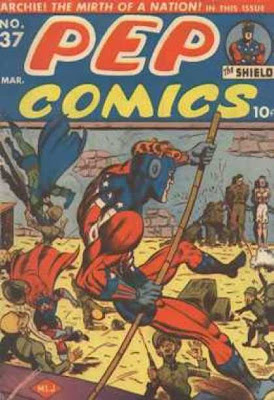 Phew! That cover is SUCH a relief. The Shield, with heavily inked musculature (even in his hair!), is pole-vaulting into a hay-carpeted redoubt teeming with Japanazis, who are apparently in the midst of boring to death some bound Americans, several of whom have already nodded off. Dusty, his cape in extra-starched glory, is socking Tojo Junior in the jaw with, um, a Nikon camera? It's hard to tell, but I'm sure Dusty is indulging in adolescent war-time smack-talk: "Turns out your inferior foreign electronics are good for something after all, Colonel-san!" And the odious Hangman is relegated to the background, busy casting shadows and mopping up the also-rans. ALL IS AS IT SHOULD BE on the cover of PEP!
You see, I had this horrible nightmare last night. There was this red-haired beaver or woodchuck or something in black pullover with an R on it, and he was using his buckteeth to chew away at the cover of a Pep magazine, just chewing it all away, and as he chewed it, it was killing off each character as he ate their picture on the cover, first the Hangman, then Dusty, then the Shield, with finally nothing left to stop him from consuming the entire soul of the nation=== the surreal horror of it was overwhelming.
Phew! Thank Jove it was just a dream...!