I really liked my comics this week. 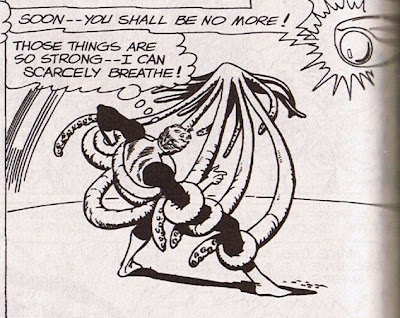 In a previous post , I was challenged to make a Heroclix map of Dr. Fate's Tower, which given its Escherian architecture is clearly impossible.

Naturally, I began work on it immediately. 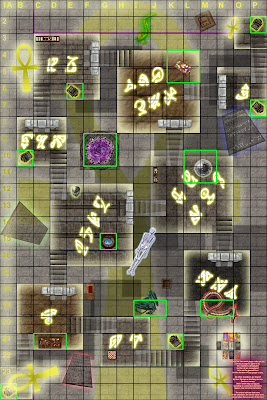 There's a "floor area", where players start, and there are chambers that are "above" the floor area; the two areas are not connected, and each treats the other as blocking terrain (except for the stairs, which floor figures can move past, but not see through). That is, until...!

At the beginning of each players turn, he rolls one die (or, if the players agree to it, two dice). The chamber(s) that corresponds to the number on the die is immediately considered part of the floor (with no walls). Through that chamber, the other chambers can be accessed. Except for the very first "room roll", a player can choose to skip their roll and leave the chambers where they are.

So, exactly where you are and who can see can change with each room roll. Kind of like the wackiness of Dr. Fate's ever-changing tower.

It's a hard environment to plan for, so you want a team that's mobile and adaptable. Powers of particular value would include Stealth, HSS, Running Shot, and Probability Control (which can be used on the room roll).
Posted by Scipio at 6:31 PM 7 comments: Links to this post

Pep 4; An Incident on the Mall 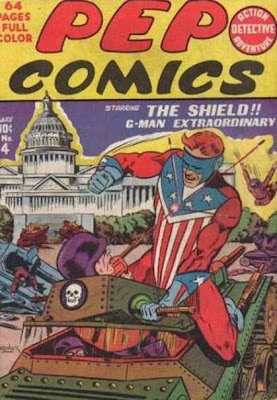 So, there I was walking along the Mall for no particular reason, just like people always do on teevee shows set in Washington, but which real District residents absolutely never do because the Mall is a featureless void that sucks out your soul, warps all sense of perspective, and slows time like the event horizon of a black hole, an endless expanse where you can wander for eternity surrounded by travel-numbed Kansans and Japanese tourists, barely sustaining yourself from one facade to the next with $20 hot dogs and $9 sodas.

As always, there was some sort of motley collection of Hell's Angles/POW-MIA/Ex-pirate ministry/D-Day re-enactor types milling about in those needlessly loud homemade 'tanks' they cobble together to impress, one supposes, travel-numbed Kansans and Japanese tourists. Sometimes they try to cluster within spitting distance of their perceived foes at the Moscovian and Nordic Embassies, but, since those are in Dupont, they're usually scared off quickly by advances from patrons of the Leather Rack. You shoulda seen it last week, when the Inauguration coincided with the Mid-Atlantic Leather Convention.

Anyway, suddenly, a red-haired Evel Kneivel impersonator actually leapt onto one of the vehicles to savagely pummel its driver about the head and shoulders. Thank goodness the poor driver was wearing a helmet or who knows what kind of brain-damage he might have sustained, because this lunatic was hella strong and appeared miraculously impervious to pea-shooters. I was anxious to see whether the Kap Kops would be able to subdue him with motions for cloture or whether he'd have to be taken out by an irritable Geo-Force, who was standing nearby outside the Hall of Justice like he does every day, hoping today is the day they reinstate his access codes. Of course, "nearby" on the Mall means around one mile away, so Brion, being notorious self-absorbed, might not have even noticed the commotion.

Thanks to Washington's wacky weather, I missed what happened. I was distracted by a golden shower that at just that moment burst forth above the Capitol, raining UPS men all over the West Lawn (fortunately, thanks to Frederick Law Olmstead, there's never anyone there, not even Kansans or Japanese tourists, or somebody might have been hurt-- I mean, somebody other than the UPS men).

Later, I read in the City Paper's Loose Lips that it wasn't either the Kap Kops or Geo-Force who subdued the "Evil Kneivel". Turns out a Canadian Defence Attache dashed out of the embassy and stunned the lunatic into submission by showing him the brochure of the Newseum's admission prices.
Posted by Scipio at 7:47 AM 10 comments: Links to this post

STILL the go-to hero for Indy Bands That Feel Underappreciated and Misunderstood.