Okay, please tell me you read the first issue of Black Lightning Year One.

It can be a little hard to follow in places; I always get confused when I get thrown lots of relatives and supporting characters and people without easy to identify spandex costumes all at once. That's why I avoid parties. Most parties.

But it's a valiant effort to take pull together all the bits of BL's backstory into a sensible narrative. You know, Peter Gambi, the apparent power internalization, the wife and kids no one ever mentioned, the very aggressive timeline of accomplishment that lets him be a former Olympic athlete/ crusading school reformer/ superhero/ potential Cabinet appointee.

What did you think?
Posted by Scipio at 3:47 PM 8 comments: Links to this post

Len Wein is my newest (Facebook) friend, and just in time for my spirited defense of his most recent comic, the Final Crisis: Secret Files that came out last week.

I've heard from an unimpeachable source, that this book's been getting dissed on line. Inconceivable!

Second, it's got the villain talking out loud to himself and intropositioning himself through his origin story. How refreshingly old-school and in keeping with the comic book medium!

Speaking of which.... third, the origin itself was almost aggressively old-school. The villain playing with Heroclix figures. Libra's pseudo-prophetic name, Justin Ballantine. The childhood traumas brought on by ... lack of balance. And, c'mon.... how can you not love that the Golden Age Starman is as essential part of the story? Nothing, but nothing says old-fashioned goodness and DRAMA than the Golden Age Starman. Not only does his inclusion gives us that background that makes the original Libra story (more) believable and grounded in the DCU as we know it, but the story lets us know that Ted Knight had all the info on his Starman tech just filed casually in an unlocked cabinet in his office. Of course he did; he's Starman. It wouldn't even occur to him that some lesser being would be able to understand his work.

Now, it's possible that Len just writes this way naturally, as a good Bronze-Ager. But I much prefer to perceive it as an act of literary defiance against the Morrison Generation. I imagine him pounding this stuff out on a typewriter, snickering, "THIS is how an origin goes, you disaffected little postmodernist punks! Everything you think is 'cool' is underacinatably rooted in everything you think is 'uncool'. And there's nothing you can do about it; NOTHING, I say! BWAHAHAHAHA!!!!"

Fourth (and this is really, I suppose, just an extention of the last point), there's the dialog. If I want weepy drama, self-recrimination, and moral quavering, well, my television gets both "the N" and Lifetime, thank you very much. I read comics because I need THIS:

"Should I commit some elaborate crime to bring myself to the heroes' attention?"

"We begin our planetary reign of terror immediately."

"Worlds uncounted are now mine to toy with as I will!"

and, of course, this timeless classic reprised from the original Libra story:

Fifth: Darkseid's makeover-vision. It's the first time Darkseid's ever impressed me or even seemed useful or threatening. Darkseid totally deserves a show on HGTV or Bravo: "Omega Eye for the Earth Guy". Glorious Godfrey could be the Culture Guy, Granny Goodness would handle the grooming tips, and Desaad could renovate your bachelor pad into a swinging torture chamber for the new millenium.

And all this is just Len's story. This book goes for the extra points, including a one-page explanation of the anti-life equation that makes more sense than all of Final Crisis put together, and the sketchbook that includes that welcome news that DC finally understands that Aquaman is a western.
Posted by Scipio at 2:42 PM 8 comments: Links to this post

Email ThisBlogThis!Share to TwitterShare to FacebookShare to Pinterest
Labels: introposition

Pep 1: You Knocked My Block Off 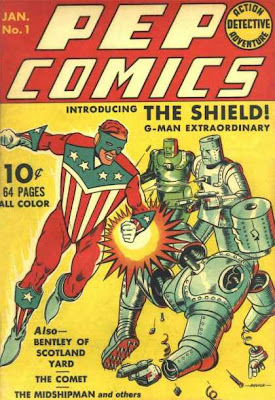 That's one less Rockem-Sockem robot to threaten American democracy! Who needs Old Glory Insurance when the Shield's around?

Lot of heroes can handle robots; but robots with guns? Impressive! Odd... but impressive.

Our good friend the Shield debuted in the first issue of MLJ's Pep Comics (in case, you know, you had some trouble READING THAT LETTERING). Pep Comics was known -- originally -- for its unique brand of "Action Detective Adventure". Don't bother reading DC comics, kids; we can give you Action, Detective, and Adventure all in one comic!

Note the yellow background; it's the Shield's favorite color and soon we'll discover why.
Posted by Scipio at 7:39 AM 5 comments: Links to this post