Are YOU a Superman of America?

Today I ran 9 miles, am throwing a Christmas party for 50 people, running a Dramatic Reading contest, then going two-stepping with Ken and company till all hours. Then tomorrow, I'll go to yoga class and jog for 30 minutes before emceeing an outdoor caroling performance at the town square, followed by dinner and game night with the boys.

Because Superman told me to... 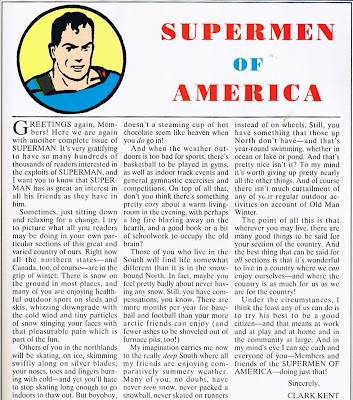 What are YOU going to do this weekend?

Batman: Brave & The Bold is better than Batman: The Animated Series. Much better.

Yeah; I said it. You wanna make sumpthin out of it, buddy?

BB&B is better promo for DC. You may not consider that an appropriate aesthetic considering, but, hey, marketing matters. BB&B is designed to use Batman as a means to introduce viewers to other DC characters. So far, we've already seen in three episodes the likes of Plastic Man, Blue Beetle, Aquaman, Fire, the Gentleman Ghost, Green Arrow, Clock King, Black Manta, Felix Faust, and Ocean Master. In BTAS, we saw... Robin and Batgirl. The opening sequence of BB&B actually builds the names of various guest stars into the layout; the opening sequence of BTAS doesn't even contain Batman's name.

BB&B is better characterization. This Batman is still a hard-nose (even harder than the BTAS one), but has a sense of humor. His scene where he mocks Felix Faust is priceless. And Batman's unique personality is shown off in excellent contradistinction against the guest stars. And Dietrich Bader is flawless as Batman, much to my surprise.

BB&B is better action. Each episode begins in medias res, and has little slow time till the end. Plus, no time is wasted on Bruce Wayne; it's all Batman. More happens in one episode then in a year's worth of JLA.

BB&B has better decor. Yep, you heard me. BTAS was clunky, with its overly long Batmobile and colorless Batcave. Every single bat-gadget in BB&B is stylish, with red accents and bat shapeyness. BTAS is a PC and BB&B is a Mac.
Posted by Scipio at 10:36 AM 46 comments:

Why Magnus is Better than Chuck Palahniuk 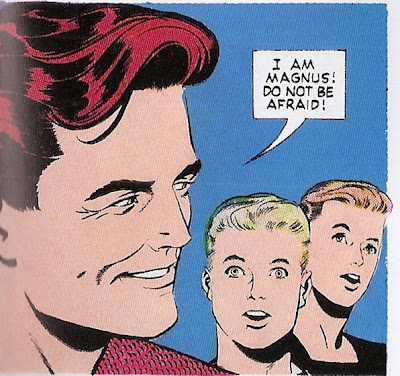 Because Magnus inspires gay youth to accept themselves and to allow their hairdos to exceed the boundaries of their panel layout.