MIAMI DESTROYED BY WAVE OF ANTI_MATTER!

Okay, so I'm sitting here on the veranda overlooking Collins St., having just gotten back from a many-hour dinner with a group of male high fashion models. Yes, really. 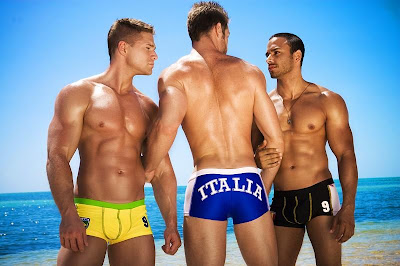 No, I'm not from Italy, but those trunks do make me look good...!

But, such is my dedication (or my inability to fit male high fashion models in a doggie bag) that I'm posting here anyway... .

Now that I'm back in Miami again, I'm suddenly wondering....

Has any comic book even been set in Miami? I mean, not a series, but even just a story? I'd think I'd remember it, if I'd read such a story...

It's not a big issue. As I've mentioned repeatedly, I'm a big fan of fictionopolises, and that's where most of the real action takes place in (DC) comics. Oh, occasionally, Montevideo will get blown up, Manhattan will be attacked by a fleet of acid-laden zeppelins, or Paris will get eaten by a painting. But the Gotham City warehouse district sees more crime in one week than Shenzhen sees in a year.

when I think of all the real-world places that have been featured in DC Comics, Miami's absence starts to irk. Washington (of course), Pittsburgh (of all places!), San (Sub) Diego, El Paso, Detroit (tee hee!), Kansas freakin' City...! And yet, it's as if Miami doesn't exist. Maybe in the DCU it doesn't, and Fawcett City is here instead; it would explain the architecture.
Posted by Scipio at 11:46 PM 20 comments: Links to this post 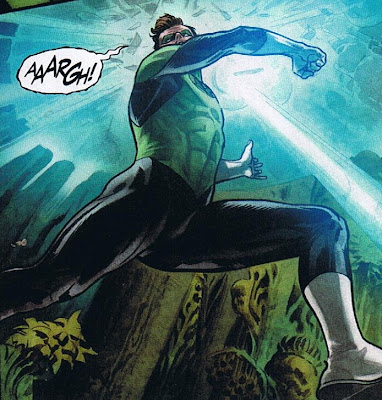 Posted by Scipio at 9:35 AM 9 comments: Links to this post 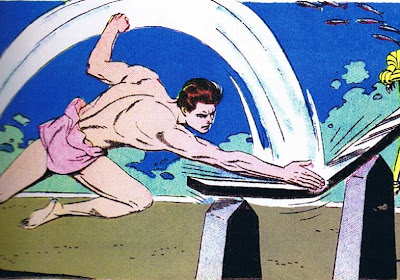 And make it look good.
Posted by Scipio at 6:16 AM 7 comments: Links to this post

Today I watched the Superman/Doomsday animated film for the first time. I hadn't watched it before because, well, frankly I didn't like the Death of Superman story and really disliked Doomsday himself.

So I was very pleasantly surprised that I enjoyed that film, in that it improved vastly on the original story.

As in the original story, Doomsday himself isn't significant at all; he's the thinnest of plot devices to get to 'the Death of Superman'. In the animated version, the first is mercifully brief; we don't have to watch Doomsday swat his way through a host of other heroes. I could always believe that Doomsday killed Superman before anyone else had time to help; I could never swallow that the entire of the superhero community couldn't have simply and quickly transported him to deep space somewhere, or captured him with the JLA transporter or something.

The contrast between Lex and Superman has never been starker. Lex curing muscular distrophy while staring out the window, while Superman, unable to cure cancer, regrets his role as merely Earth's resident strongman. And Lex, with his Mercy-killing? Plus "Why did you leave me?" and "Who's your daddy?" Yes, this Lex has issues.

I liked the simplification of the plot of what happens when Superman is "dead". Instead of just weepy encomiums, we get to see, through the actual degeneration of certain characters (Lois's death wish, Jimmy's sell-out, Perry's drinking) and Metropolis as a whole, that Superman's chief contribution is as an inspiration rather than a protector. Rather than the Reign of the Four Substitute Superman, we got just one sub who embodies the "No, that's not what Superman stands for" concept. And creepy! As shocking as the Toyman scene was, the scene with the cat was bone-chilling, particular since you know that, well, he's right.

Don't get me wrong; Superboy and Steel were great characters, and, while the Cyborg Superman and the Eradicator weren't great, they did provide fodder for many subsequent stories. But the "superclone" was a much way to get to the heart of the "What Would Superman Do?" issue.

I appreciated the little touches around the Fortress: Brainiac's skull, one of the robots from the Fleischer cartoons, and the Bottle City. And, YES, I laughed at the gratuitous Kevin Smith joke for the Superman insiders...!

The plot also fixed some glaring holes in the original, such as making it clear that Superman was never actually dead, and providing a plausible reason why Clark Kent's absence after Superman's death didn't reveal his secret identity.

In fact, the whole viewing experience made me think that perhaps we should let them make these movies first, and then pattern comic books after them!

What did you think of Superman: Doomsday?
Posted by Scipio at 5:34 PM 17 comments: Links to this post