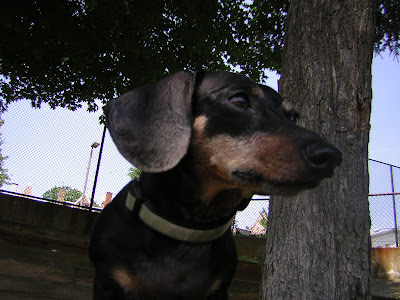 I don't think I've written about Heroes before, but it's time to break that silence, now that Jeph Loeb has been fired.

In the article linked, the writer is concerned that the absence of Loeb will sever the "comic book connection", and that the show will spiral (further!) into Petrelli Family Melodrama rather than Superheroic Intrigue and Buttkicking.

I watched the first season of Heroes; I enjoyed it. I thought it was a fun miniseries. One problem, though; it wasn't a miniseries. I was stunned when I heard "Heroes Season Two"; hmm, I thought they were going to quit while they were ahead.

But that's not the Hollywood way (SAW VI!), and so we have had Season 2 and 3. And while it's more or less retained its "comic book touch", I'm afraid it's doing so through many of the worst cliches that characterize comics (and soap operas). Here's just a few:


The recent "morality polarity reversals" are painfully strained. Let's make Peter a villain and Sylar a hero! It's easier to believe a Senator can fly... . It's become asuperpowered Degrassi, with characterization changing randomly from episode to episode based on the needs of the plot. "We need Spinner to be a jerk this week, and refuse to share his healing powers with Jimmy."

Then there's the typical Loebian "villain of the month" syndrome. Season 1, Sylar is the be all end all villain. Season 2, he's powerless and there's a new mysterious Big Bad, whose power is the ever-threatening 'not-dying' power, wielded so effectively by Willard Scott and Charles Lane. Ever notice how directors invariably choose some who ages really badly really quickly to play an immortal? Season 3, Sylar's a hero (for no compelling reason other than "Are You My Mommy?" syndrome), and the Immortal Big Bad gets offed casually just to show how much Bigger and Badder the new villain is. In three seasons, Loeb & Co. have managed to push the franchise to same levels of narrative desperation that most comic books tooks 50 to 60 years to reach.

I'm not sure that Loeb's leaving will redeem Heroes; I'm thinking it's too late for that. But perhaps the comic book cliches will be less obvious now.
Posted by Scipio at 8:19 AM 23 comments:

Sorry to rain on anyone's parade, and I'm sure this is going to anger a lot of readers, and I'm going to be misunderstood. But here goes....

First, let me affirm, and strongly: I supported Obama during the primaries; I voted for him in the general election. I was, am, and, hopefully will every reason to continue to be, a strong supporter.

His election is not just a victory for an individual or a party, but for American democracy and spirit, which it has revivified. And I couldn't be happier about it.

I am not delighted by the constant characterization of Obama as the first Black president. YES, he certainly "looks black". Yes, because of that he's certainly had the experience of growing as a perceived black person in the last 40+ years. And, yes, that is very significant. It's of great signficance and a great sign of hope for the future that the American people would elect such a man as its leader.

But, for one thing, he's biracial. That, to me, is more symbolically significant, since he personifies (or could) a post-racial way of viewing the world, one that is the only real hope for social unity in our nation. That's something that gets swept aside when he's characterized simply as "our first black president".

That characterization also brushes under the rug the fact that father was not a Black American; he was a man from Kenya, where being black doesn't make you a minority. Lumping together Africans or African-American immgrants minimizes the uniqueness of the experience Black Americans. Their ancestors did n 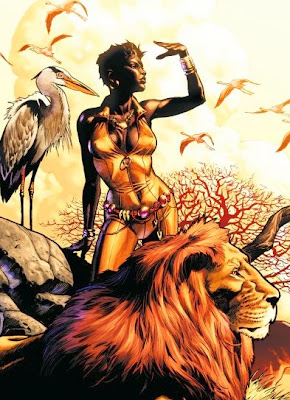 ot come here voluntarily; they were deracinated from their native cultures, and, as a result, resiliently created a new one. American culture owes very little of its uniqueness to African-American immigrants; it owes an ENORMOUS amount to Black Americans.

Black Americans aren't "Black" simply because they happen to be of a particular race, but because of their unique cultural experience as an American minority, one that's not all similar to the experience of modern Africans.

It may make us feel better and oh-so-modern and color blind to vote for someone who "looks Black", even though he is actually the half-black son of a Kenyan, rather than a product of our native Black American culture. I'm very happy Obama was elected; but when I hear people saying that he was elected because he was black, I cannot help but think, "Or because he is indeed, very very 'white' ..."

It's "the Vixen Effect". Yes, let's create "DC's first black female superhero"; yay! But GOD forbid she should be an actual black American woman. Heavens, no; she has to be an African supermodel.

I wish creators -- and political pundits-- would stop conflating race with culture; it's part of the very "racial mindset" that's helped perpetuate bigotry and racial stereotyping.

Thanks to that conflation -- and Vixen -- almost no one can name the character who actually WAS the DCU's first black American female superhero. It's my hope that the election of Barak Obama will help stop people from lumping race with culture, rather than reinforce it.
Posted by Scipio at 11:18 AM 54 comments:

Though I don't think I've ever mentioned it before, I have great admiration and attraction to the military and military service. Had the world been different than it was (or I more foolish), I would have joined up myself, as did my sister.

Many of my close friends, too, are or have been military. While the election talk in most circles (rightly so) is about the economy, for many of my friends the topic gravitates toward what the election may mean for redefining what is considered appropriate use of the military.

THE BRAVE AND THE BOLD 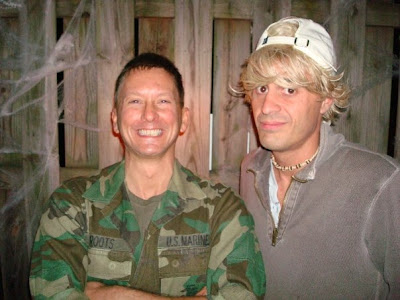 Sgt. Rock & Matthew McConnaughy: because YOU demanded it!
Given that, it pains me to see the military -- which performs so impressively in battle -- do so poorly on the spinner racks. At Big Monkey, we easily sold out of the Obama/McCain comics; this is not just a political town, but THE political town. But, comic books starring or featuring the military? Even when we get small numbers, they still languish on the racks like the Austrian Navy.

Guerillas. The War That Time Forgot. The Unknown Soldier. The Haunted Tank. War Heroes (even with male genitalia!). Even Iron Man, Director of Shield. They don't even sell as well as Moon Knight, for pity's sake. Why is that?

Part of the reason could be the post-Vietnam unpopularity of the military. Once upon a time, the military were almost always the heroes in popular literature. But in our lifetime, it has been fashionable to "blame the gun"; since wars can't be waged without the military, we blame the military for wars (and even the personnel themselves). Even worse, the military are often the Black Hats. Now, in comics, anyone should be fair game; politicians, teachers, military, police, beauticians-- any authority figure can be the Corrupt Person in Power (tm). But the Evil/Callous/Lunatic U.S. military officer has gone from trope to cliche, and when an officer shows up in popular literature, most viewers/readers immediately look for the other shoe to drop, where they find out not whether he's an asshole/threat, but simply in what way he's an asshole/threat.

Perhaps it's because military comics suffer from unfabulousness (as, certainly, some of my military friends do). When you've alien beings hurling autos at one another and spandex-garbed anatomy models doing triple-backflips, watching grunts try to take a hill can feel like watching a plumber fix a toilet: necessary, but without any engaging glamour.

On the other hand, the problem could be the opposite. Just look at the list of military comics listed above. Trained, armed apes; soldiers versus dinosaurs; masters of disguise; haunted tanks; superpowered non-civilians; flying aircraft carriers. Perhaps the problem isn't that military comics aren't fantastic enough; perhaps it's that they're too fantastic. I love chocolate ice cream; I love lima beans; but even I would not expect lima beans & chocolate ice to be a good combo.

Or is the problem more subtle and fannish? Is it that any story outside of Mainstream Continuity will languish, and that putting a military story into the DCU/616 worlds automatically makes is a superhero story?

What's YOUR theory about the current state of military comics?
Posted by Scipio at 8:38 AM 19 comments:

Why Magnus is Better than my Ninth Grade History Teacher 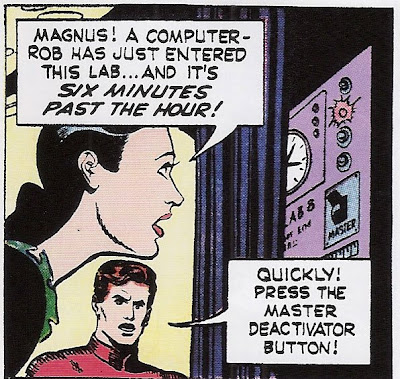 Because Magnus knows how to really embarrass you when you're late.

Reasons to Read "I Was Kidnapped By Lesbian Pirates From Outer Space!!!" 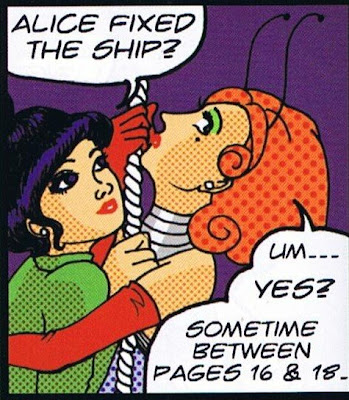 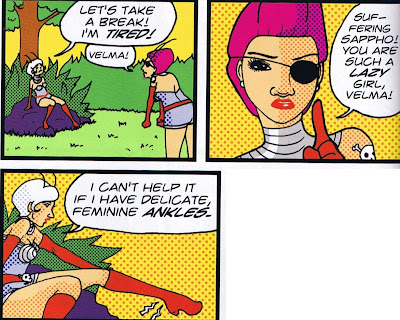 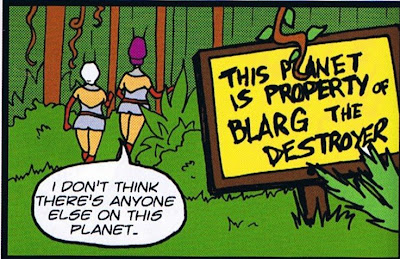 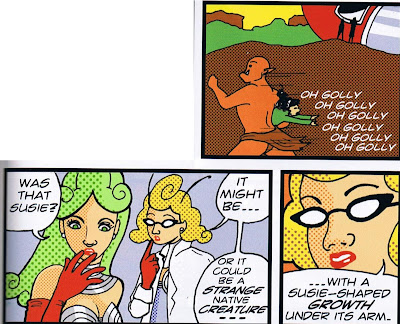 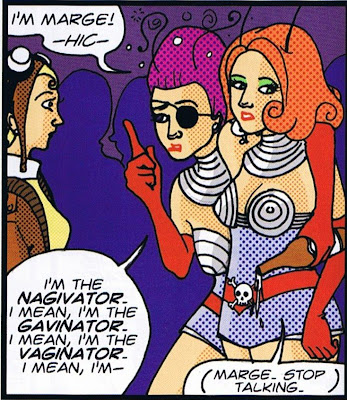 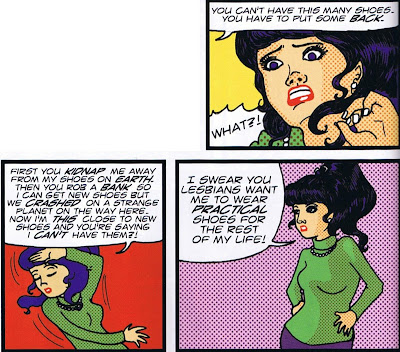 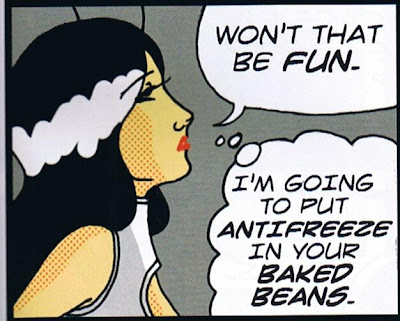 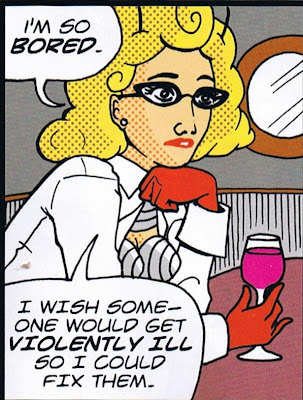 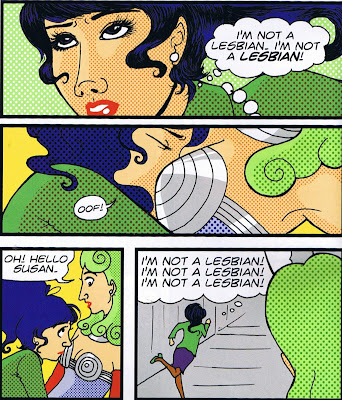 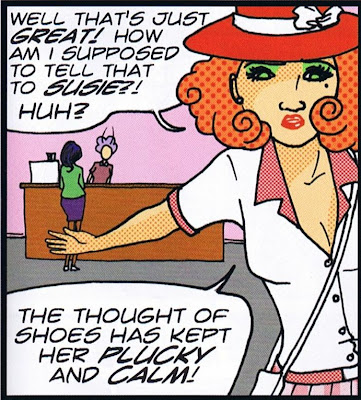