Yesterday, I was delighted to receive, hand-delivered by charming Charlie of Xion Games, copies of my recent Heroclix maps: Ferris Aircraft, the Iceberg Lounge, Central City, and Crime Alley. Soon I'll have to order Apex City and Weisinger Plaza, as well!

I was delighted; it can be hard to get a good sense from staring at a computer screen how a large-scale printing is going to turn out, but these were excellent, with delicious detail. But I also got some news that made me feel like a piker...

Imagine my surprise to learn that an Absorbacommando, Mathias, actually went and made 3D versions of some of my maps, including...

(including the fire escapes!)

and the Joker's Hideout Map.


Very impressive, Mathias! I'm honored you troubled to give my work the 3D treatment.
Posted by Scipio at 2:24 PM 13 comments:

Thank the Guardians (and Tony Z, who brought this to my attention)!

Finally we can ALL own the episode where Hal Jordan gets hit in the head by an owl....

There are lots of reasons why Martian Manhunter's going to die (and why DC's been trying to send him to the chopping block since before Identity Crisis): intrinsic difficulties with the character, inability to maintain his own title, a *snort* Rogues' Gallery even more ridiculous than Green Arrow's.

But here's the REAL reason: 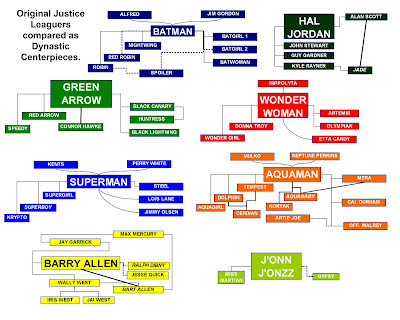 Click image to see it full-sized.
And please don't "correct" me about Green Arrow being an original Leaguer;
do you really think I don't know these things already?
J'onn has not been developed as a Dynastic Centerpiece.

Cue the groaning because, yes, it's the Return of My Pet Theory, the Dynastic Centerpiece Model. Now, you can quibble with the specifics of the diagram above (Neptune Perkins?!), but don't bother, I won't engage you. Focus on the central point: the other Justice Leaguers are Dynastic Centerpieces and J'onn is not.

It didn't have to be this way. DC could have tried to build a dynasty around J'onn. In the Silver Age, DC's editors and writers were consciously aware that they were building a mythos around characters, adding a new element every few months. But nowadays, I can never tell whether DC is aware of the Dynastic Centerpiece Model (or whatever else you might wish to call the concept), and whether it's being applied (or not) intentionally (or not). When good writers were working on Aquaman, Hawkman, and Firestorm, they clearly were building dynasties; it didn't save the titles in the short-term, but they certainly had the right (long-term) idea.

It seems so simple. Trim his powers a bit (particularly telepathy... that's a story-killer). Give him the old "Ultra-Boy" limitation. Instead of casting him as a bottomless well of power like Superman, portray him as a "limited charge" player, like Green Lantern. Let him become Marco Xavier as a new secret identity. Cluster around him some characters he's been linked with before in his varied career or who otherwise make sense, and let them interact with one another in new combinations. Give him a brief, like chasing down villains who are on the lam from their regular fictionopolises. Put him back where he belongs, in the incendiary capital of the world, Apex City. 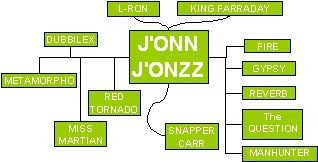 You can swap out any of the particular players here,
but tell me you wouldn't find this group intriguingly bizarre.
Oh, and throw in a Dachshund named Jupiter II and Plastic Man;
how could such a thing fail to sell?
Face it; no one will miss J'onn when he's gone. Oh, sure, they'll miss him, but nothing will fall apart without him, and that's the real reason he's so easy to get rid of.

The other Leaguers have "families" that are built around them, that would not cohere without them as the centerpiece (if you need evidence of that, read pre-Rebirth Green Lantern, the last 23 years of Flash, or this month's issue of Aquaman). J'onn doesn't have a "family"; just co-workers in the JLA, and, to be painfully frank, they've got families of their own. Their lives (and titles) will press on just fine without JJ around. If you want the Martian Manhunter to stick around he has to be the center of some dynasty, not just the Odd Man Out in the Justice League.
Posted by Scipio at 7:24 AM 41 comments: 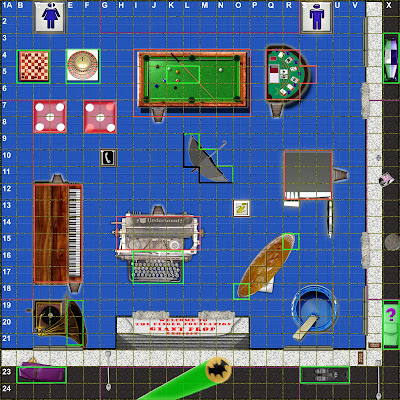 It's all ready for a visit by a Batman villain;
some of their cars are already there.

Oh, and look closely or you'll miss the
"Vote for Pengy" poster.