Aerial Espionage, Part 3: I Thought You Were Rather Dumb

When we last left Speed, the timbers of the burning, exploded house were falling all around in the basement, where he lay trapped by his bonds.
Escaping through the house is impossible because Speed says so.
So he escapes through the cellar window, which you'd kind of think would have been his first instinct anyway.
For some reason we mere readers are not privy to, Speed's Speedmobile is not available to him, even though he drove there in it.  But, you know, I'm okay with that, because it gives us this, one of the most perfect Speed Saunders panels of all time.
An authority figure approaches Speed out of the blue; Speed takes command of him by identifying himself and begins giving him absurd orders with zero further explanation.  It's sublime.
"Watch for spies along the road." Yeah, you can recognize spies because they are the ones carrying goldfish.  The mad god Saunders continues his reign of absurdity at the railroad station as he exercises authority over a train conductor WHO CANNOT POSSIBLY KNOW HIM.
The mad god is, well, mad now and Major Kelvey's larger typeface won't save him from Speed's power of performative utterance as Speed prepares to STATE his way to victory: 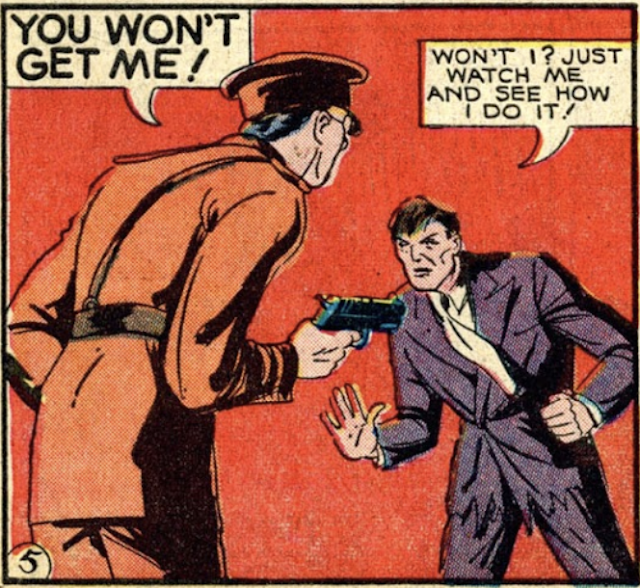 Through force of will and impending deadlines, Speed generates another safeybelted authority figure to take charge of Major Kelvey, because that's not the kind of thing you can leave to train conductors, snazzy though their uniforms may be.
Speed descends to the lower level of reality that is "Parcel Post" where he finds the escaping goldfish along with their accomplice:  THE COLONEL!
Okay, sit back in your chair and prepare for THE SPEED-EXPLANATION.
Spend some time thinking about how hard it would be to paint coded message on goldfish; now, continue and watch as Speed summons a police car from the ether.
Once Speed explains it all to you, don't just you feel stupid?
It ends, as it so often does: with us learning that Speed was just guessing, but it turned out okay because naturally... 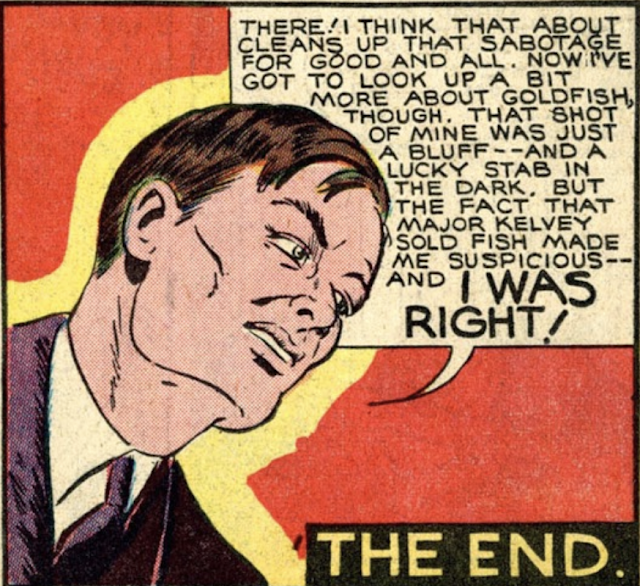 Goldfish are the most devious and unscrupulous of fish. It's good that Speed knows that, and realizes that any human that associates with them is invariably dishonest.

I really love how much Speed is like a kid pretending to be a detective while his life happens around him. He's not being dragged to the grocery store, you see, he has convinced Officer Skinny Safetybelt to help him chase the goldfish-weidling spies to the train-slash-parcel post. And then he'll stop (kid playing) Jacks from mailing the box of fish (sticks?) with writing on it.

But ignoring all that...

What was the point of the story!? We watched a saboteur ask Speed to find him, give up the game in the introduction, soil his safety-belted shorts when Speed outed his confederate, blow up either a house or an entire apartment building, and then rush to the special Post Office in the train station basement (where, I assume, they don't accept envelopes) to mail out their tatted-up fish, only to be foiled by the man he asked to foil him. In fact, the only place where Speed got it wrong, is that Jacks is both rather dumb and a spy.

Although I do appreciate that the story basically ends with "I should probably head for the Metropolitan Library to make sure that goldfish don't naturally have secret messages etched onto their sides. It's going to be really embarrassing at the trial if they do..."

"What was the point of the story!?"

It filled up six pages. I'm sure that's all anyone asked of it at the time. ;-)

Per the GCD, in addition to Speed and (of course) Batman [and Robin], Detective Comics #50 included Bart Regan (aka..."Spy"), the Crimson Avenger [and Wing], Larry Steele (Private Detective), adventurer Cliff Crosby (whom, DC Fandom reports, encountered a roving African tribe in the Arctic Circle on one occasion and wore the corpse of a giant octopus on his head to frighten slave traders on another), Steve Malone (District Attorney), and Slam Bradley. Detective Comics certainly had it right there on the tin.

It's a valid point: the villains literally came up to Speed on the street, asked him to stop them, gave him a RIDE to where they were doing crimes, committed one ON THE RIDE THERE for him, then ANOTHER upon landing, finishing by immediately giving him all the information he needed to become suspicious about who was guilty.

"just a bluff"? "a lucky stab in the dark"? Is Speed implying that if Jacks had only thought to respond with something to the effect of: "What are you babbling about?! PLENTY of goldfish have natural black marks!" and call his "bluff", then Speed would have had to back down with [fish] egg on his face? You don't often see such a moment of vulnerable self-introspection in a golden age story.
;-)