Naturally, we have no idea who that bespectacled officer was who wandered away from away from Speed Saunders because Speed never asks what anybody's name is.
Harrumph. Okay, FINE, Mr. Speed Saunders; make a liar out of me, see if I care. Major Kelvey, with his unusual Grindr profile, becomes a person of interest to Speed Saunders (and a lot of other guys within a 3 mile radius of Magellan Field, I'm sure).
Speed is revving up to tesser Colonel Safetybelt through the fifth dimension where Major Kelvey can't notice them tailing him, when suddenly--
Speed, hot on the trail of a queer egg, has no time for stolen plans, and so leaves Colonel Safetybelt, hurtling away through the Sea of Yellow in his Crimson Speedmobile, Crimson Speedmobile, Crimson Speedmobile.
Oh, I get it now.  Speed's theory is that the bomb was "released" from outside of the plane; specifically, that the bomb supports were shot off by someone with a telescopic rifle as the plane flew by at, you know, the speed that planes fly.  That's... well, I'm not going to comment on the likelihood of that.  That should be left to someone who's both an expert on military bombing AND an expert long-range sharpshooter and the odds of someone like THAT reading this post are... oh, wait, they are 100%. Okay, you know who are, so comment.  Personally, I'm still preoccupied with trying to figure out why a colonel flew an armed bomber to transport a civilian on a short hop for an anti-espionage investigation.
While we wait for that, we join Speed at Major Kelvey's swinging bachelor pad.
Saunders and Kelvey bond over goldfish, of which Speed is a great aficionado.

Through reasoning opaque to us non-goldfish experts, Major Kelvey someone intuits that Speed has figured out that he's the spy!
Kelvey promises to kill Speed immediately, which is what bad guys always do immediately before they don't kill someone.
So, Kelvey DOESN'T immediately kill Speed, but leaves him tied up in the basement.
Did you know you can send goldfish by parcel post? It's 1941, all things are possible.
Speed now realizes that there's more than one spy and resolves to escape.  Maybe he'll just rip out a window like he did in Chinatown or hypnotize some snakes like in another story I didn't have the fortitude to show you. 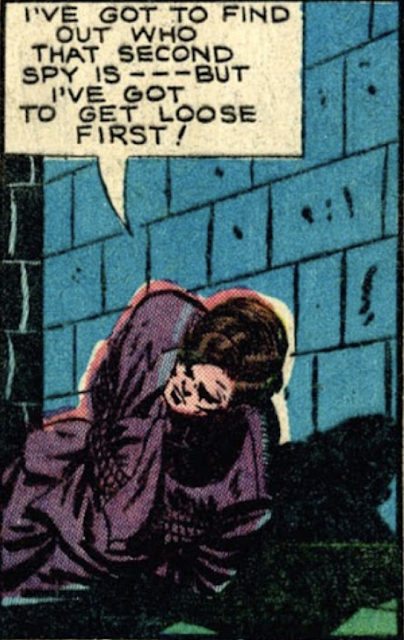 When a villain says "and this will SURELY take care of the hero",  it usually means it most surely will not. Still, the situation is not looking good for Speed: the bomb does explode, the building is collapsing, and doing so atop Speed, who still hasn't extricated himself from his bonds.

Can this be the end of our hero, killed by a fellow goldfish fan?

What, no rat carrying a handy candle for Speed to burn away his bonds? Not even a rogue goldfish with a switchblade? If only Speed had listened to what the goldfish were trying to tell him, instead of leering at them, we might have already wrapped this plot up!

I'm just going to assume that Speed's face is distorted by the water in the goldfish tank because holy crap where did that forehead come from? It's like Hector Hammond stepped in as a body double.

I'm going to kindly call this era of Speed-drawing "off-model".

Effective range of, say, the Springfield M3 sniper rifle (most likely weapon for Soldier McSpypants here) is approximately 900ft (270m), but later in the war some rifles were up to approx 1,800 ft (600m).

Assuming no wind and the milliradian accuracy at the time to hit a target of approximately 3-4 feet at in length, at that height, at the speed: My math turns to the Magic 8-Ball for answers: "Signs Point to Not Very Likely."

Also, a few questions: What bomber in WWII are they flying that have bombs on wingstubs and not internal to the bay?

Also also, who the heck straps a bomb to a plane that was ferrying Speed to the airfield? "No worries, Colonel, just gonna duct tape this 2,000lbs bad-boy to your starboard wing JUST IN CASE you need to obliterate a US Army Air Corps hangar!"

"who the heck straps a bomb to a plane"
Vulture Squadron.

"What bomber in WWII are they flying that have bombs on wingstubs and not internal to the bay?"

I still question what ordinance person would mount live bombs to a ferry flight.

Flown by the Colonel.

But as is often pointed out by the wise gurus: "Comics gonna comic".

Maybe I'm just traumatized by the "bloody arrow," but my guess is that the fish keep looking at the purple discoloration on the couch cushions.

"I'm still preoccupied with trying to figure out why a colonel flew an armed bomber to transport a civilian on a short hop for an anti-espionage investigation."

Isn't that exactly the sort of thing that M.A.S.H.'s Colonel Potter would do?