This one is tricky...

In the Golden Age--any age, really-- Wonder Woman is from a faraway land that has lots of education but not 'college' per se (and certainly nothing that awards a 'degree').  It goes without saying that in any iteration Wonder Woman, raised with a classical education on Themyscira, is very well educated, certainly beyond the level of a 'bachelor's degree'.  But, in the Golden Age, she actually got by with the favorite method of Golden Age heroes: she cheated.  Because there is little the princess of truth enjoys more than lying her star-spangled pants off.

Rather than going through the messy and tedious folderol of getting herself credentialed in Man's World, Wonder Woman simply took the place of someone else who was already credentialed: the REAL Diana Prince.

Yeah; Diana BOUGHT her degree, quite literally.  Because honesty is an alien concept to her, especially when it would stand between her and The Man She Loves.  Now, in fairness: Diana DID have the knowledge to become a nurse. We knows this for a fact because she says "I'm a trained nurse." Oh, wait; I forgot; she lies.   BUT... she invented the Purple Healing Ray.

If, in five days, you can invent a ray that brings people back from the dead, well, I'm willing to concede that you are probably going to make a pretty good nurse.

But what about later? When she worked at the War Department? And the Pentagon?  Did she get those jobs as a war nurse?  Or when she became an agent at the Department of Metahuman Affairs?  Or when she was a U.N. tour guide?

Or in the movies where she's obviously doing prestigious museum work, that must require degrees and experience?  Does she just keeping finding people with the right credentials named "Diana Prince" and buying their IDs from them?

No; at some point, Diana went to the trouble of earning proper credentials (including a college degree) to do whatever job(s) she has.

I mean, it's not like Diana hasn't had TIME to go to college. 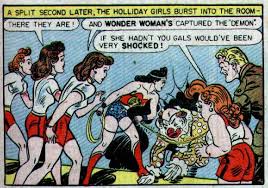 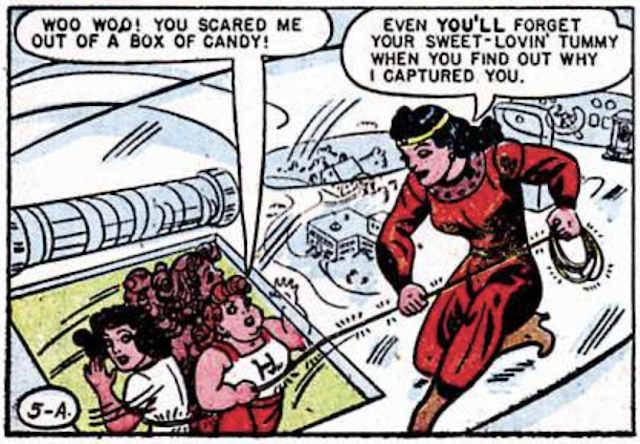 Wonder Woman pretty much spent the entire Golden Age at Holliday College with the sisters of "Beeta Lambda Phi" (sic).  There is simply no way that she (and the college) didn't take advantage of that by enrolling in a few classes here and there.  WW surely didn't, ya know, matriculate with a class or anything, but there is no way Little Miss Self-Improvement didn't get a degree or eight in her spare time over the years.   But that's why my verdict was that 'she has a college degree' rather than 'went to college.'

I mean, can't you picture the panels on the Untold Tale where she corrects all her professors on history, and science, and, well, everything other than ice cream, because she's the g-d Wonder Woman? Of course you can.

Remember, it's been pretty consistently established that (unlike Batman and Superman) she basically has zero social life in her civilian identity; no friends, no family, no commitments.  She didn't spend ALL her free time with a Stereotypical Blind Chinese Sensei/Sage.

SO, although Wonder Woman did not 'go to college' per se, she definitely found a way to get a degree or two along the way, simply because it's the 'have it all/ do it all' kind of thing she would do. PLUS... she would want to inspire young women to do the same.
Posted by Scipio at 7:35 PM

There are modern, warrior-oriented versions of Wonder Woman who I could imagine loudly insisting that education (not involving stabbing things) is a waste, but all other versions definitely do give the "Ms. Prince, our records say that you have taken enough random courses for any of these listed degrees. Pick one, and we'll just give you your diploma" vibe.

By the way, my favorite part of Wonder Woman's early origin stories was how Diana Prince needed to look exactly like her, as if prospective employers ask for a description when they call schools to confirm a listed degree. "So, she has the degree and is certified, good. Does she wear glasses...?"

No argument from me. Yes, she resorted to deception when she first came to Man's World, but I feel like she'd be driven to legitimize her dubious educational status as soon as possible.

Movie Diana is even easier -- as an immortal who basically dropped out of sight for decades, she had plenty of time to earn whatever credentials she needed after creating a new identity, which also would have been easier in the early 20th century. However, she'd need to keep "updating" her status every few years to keep people from noticing she never ages. That would get more difficult over the years as technology advanced, but now she's got Bruce to help out.

"There are modern, warrior-oriented versions of Wonder Woman"
Indeed; I believe I have criticized the "Xenafication" of Wonder Woman before, but it's part of a broader phenomenon of focusing on What a Bad-Ass Combatant the hero is, to the exclusive of any other skills (such as scientific or technological acumen, emotional wisdom, deductive reasoning, persuasive speaking). There are many aspects of CW heroes that are risible, but I give them credit for ALWAYS considering "talking people out of things" an alternative to fighting.

Definitely agreed on the CW shows. I worry that era of "have you tried treating him like a person?" is coming to a close as Superman & Lois and Painkiller displace Supergirl and Black Lightning, but it's been refreshing, even though the main cast is always apparently incapable of having conversations with each other. Though Eric Wallace seems to have finally broken Central City's weird "swear never to keep secrets, then immediately keep a secret, leading to the team fragmenting, before they come together to teach Barry to run faster" cycle, at least.

It'll be interesting to see what they do with the Yara Flor series, because the Wonder Woman franchise needs many things, but "please stop treating your adventures like a 1980s D&D campaign" tops the list...